From its inception and subsequent release into the marketplace this HSF has been one of most talked about, most written about HSF’s in recent memory. Some have claimed Super-Star status for the MC-462A. Others have looked at it with a skeptical eye (in the past I kind of fit in here) after all there were issues (we’ll get into these as we progress).

Never the less, Gabriel Rouchon the founder and driving force of Swiftech sent me the latest version of his now famous MC-462A HSF as pictured above. In his quest to improve his product there are many changes in Rev1 and as I understand it, more may follow.

As I was not familiar with the original MC-462A, Gary at www.sidewindercomputers.com was gracious enough to allow us to use the comparison photo below, that will show some of the changes made to the heatsink itself.

As you can see, the differences are quite obvious and were necessitated by the inconsistency of the motherboard manufacturers design and/or placement of capacitors and/or resistors in the area of the Ziff socket, sometimes even board to board. Another major change had to do with the 80 mm fan used. The Original was a high speed 68 cfm Delta fan that produced 49 dBA’s turning at 4900 rpm. The revision uses an 80 mm Sanyo Denki 53 cfm fan that produces 45 dBA’s turning at 4600 rpm. There were a number of issues concerning the original fan, but the most important reason for the change was due to vibration and the noise pitch directly related to its use.

At this point, I hope that I’ve wetted you appetite sufficiently enough where you’ll want to know more about this unique HSF, but first, I’ve got to tell you about the system used and the method of testing (I’m starting to run out of ways of writing the same basic information for each review). Please bear with me.

My system is comprised of the standard items found in most computers, but with some major differences. The case is an all Aluminum Lian-Li PC-10 mid-tower with an Enermax 430 watt power supply, Rounded IDE cables are used and the power supply lines are loomed, the three stock fans have been replaced with high performance Panaflo 80 mm 47 cfm models. The Abit KT7A-Raid is our motherboard of choice as is our AMD Athlon 1.2 GHz AXIA 266 FSB CPU (note: this is a hot running CPU producing up to 66 watts). An ambient room temperature of 74 degrees Fahrenheit 23 degrees Celsius was maintained during the tests.

Our findings are just that, our conclusions after four days of testing, and may differ from what you can attain due to differences in equipment and cooling system!! They are however, a reflection of what can be attained with an above average case and cooling in place.

We conduct our tests in a manner that best reflects the way a great majority of computers are run day in and day out, by using a mix of software that contains Business and Accounting applications, a varied combination of Utilities, Graphic intensive software, some 3D games, Surfing the internet and burning CD’s.

Fifty readings per day, for four consecutive days are taken using Via Hardware Monitor and the Award Bios, the high and low temperature readings for each day are discarded and the remaining 48 averaged. This method is referred to as a weighted average.

There is a slight deviation from our testing and reporting procedures with the MC-462A Rev1. First of all, we will not be using our trusty Delta 60 mm 37 cfm fan as this unit uses an 80 mm High quality/performance Sanyo Denki 53 cfm fan. Second, there will be no comparison with other HSF’s, the reason being that the Swiftech MC-462A Rev1 is in a class all its own. There is absolutely no HSF to compare it too!!

A chill way to use phase change cooling 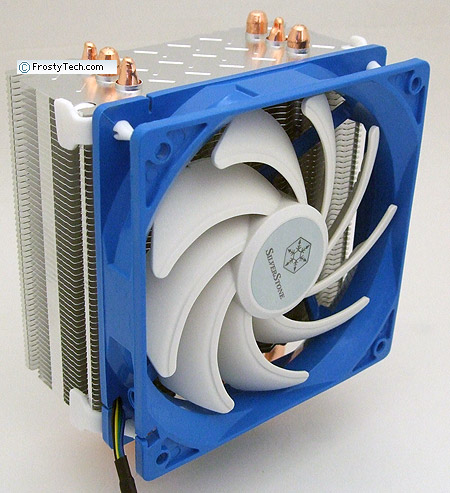 A skinny air cooler from SilverStone