Monitor – ADI L712 17″ LCD Monitor – $1099
When it came to selecting a monitor for this Ultimate System article, I was a bit confused at where to go with it. I knew I wanted a larger than standard screen and a better than standard image quality. CRT monitors were available, had started becoming cheaper, and were readily available. However, LCD monitors were the latest trend in the PC display market. Still undecided, I attempted to find a manufacturer willing to submit a sample for me test and perhaps recommend. It was ADI that came through for me here.

I had read up on many LCD articles and reviews, and the ADI brand had come up several times, all with very good marks and credentials. ADI agreed to send me their L712 monitor, which was a 17″ LCD screen. Since most of you currently have CRT monitors, it is only fair to compare the two different kinds, and the advantages of each, and why I chose the ADI monitor. There are several aspects of the monitor I will touch on: size, clarity, gaming and extras.

My 19″ Samsung CRT monitor weighs about 50 lbs is about 14″ deep and 14″ wide. Sitting on my desk, even though I custom designed and made the red-oak wonder piece, it takes up a horrible amount of room. I was barely able to find the slim line ATP3 speakers on the top of the desk when I had the PC case on the same level as the monitor. I know it would be impossible to fit my new Klipsch’s on there. ADI’s L712 LCD monitor, on the other hand, is only about 5″ deep and 12″ wide. Though the screen is only 17″ diagonal, that is actually 17″ viewable as well! Unlike the 19″ CRT that has 18″ viewable as part of the glass size is hidden behind the molding. With the ADI monitor in place, I could fit my speakers, case and a three-ring circus on the enormous amounts of desk space I found out I had! Well, not really, but I did acquire a lot more desk space than I used to and I immediately found a use for it. Also, the L712 monitor weighs about 20 lbs, which would make it much easier to take with you to LANs or just for moving.

Comparing the clarity of the ADI L712 against the CRT Samsung is a mixed back. As most of you know, LCD monitors have a ‘set’ resolution, where the crystals are sized best to display the best picture. You’ll notice this on laptops as well, as they are basically the same kind of monitors. What does this mean? Basically that if you want the LCD monitor to display the best possible picture, you must use its default resolution. In the case of the L712, it is 1280×960. Comparing the clarity of the 2D image quality in Windows, the LCD beats the CRT hands down when using the 1280×960 resolution. The text is sharp and the colors are bright and clear. With a 120 degree view angle specification, the range of viewing the LCD is nearly the same as the CRT – which couldn’t be said for laptop displays a year ago. On the flip side, if you for some reason MUST use a resolution higher or lower than 1280×960, the screen is not as clear. The farther away you move from the 1280×960 option, the more distortion you are going to see. Anyone that has seen a modern laptop display run at 640×480 will know what I mean: words are blocky and multi-shaded, etc. The L712 when run at1024x768 shows just a BIT of distortion, and the CRT edges it out for clarity in that regards. Overall, when used at specifications, the ADI monitor won hands down.

No doubt many of you will be using this awesome system for productivity, school and of course, games! How does the ADI L712 compare to CRT monitors for gaming? As I mentioned before, when using the specified 1280×960 resolution, the LCD monitor wins. Does it in games as well, where refresh rates are so important? At the default resolution: yes. Even though the LCD monitor’s refresh rate is maximized at 65 Hz, this is more than enough for the majority of gamers out there. I was able to play Quake III, Counter-Strike, Star Craft and many other games on it without noticing any effects of the refresh rate even though my previous monitor ran at 90 Hz. ADI spent a good amount of time tweaking the monitor to provide the best possible display at the fastest possible speed, and the gaming performance here is indicative of that. One small note is that using gaming APIs (Direct3D and OpenGL) there a was a sharp decrease in the brightness of the screen. All it took was a simple menu adjustment to fix it. This could become annoying, except for the fact that the ADI L712 is able to remember settings and you can switch between your desktop and gaming schemes easily.

Lastly, I mentioned extras as a point of interest. What am I talking about exactly? First, the inclusion of a DVI cable. Some of you probably noticed these DVI connectors on some of your video cards (my GeForce 2 GTS card has one) but have never used them. With this cable, the video card and monitor to don’t have to scramble and descramble digital to analog conversions. This keeps the image the sharp, clear and removes any distortions this process would have caused. Another important extra I liked was the optional wall mount. Using some standard home equipment, you can setup a wall mount to place the monitor on. ADI’s wall mount was stable and easy to install, and using it you can save even more desk space. The L712 is mounted on the wall behind my desk now, leaving the smallest foot print you can get on a monitor: none.

For all these reasons and more, the ADI L712 monitor won my choice for the monitor for the Ultimate System. 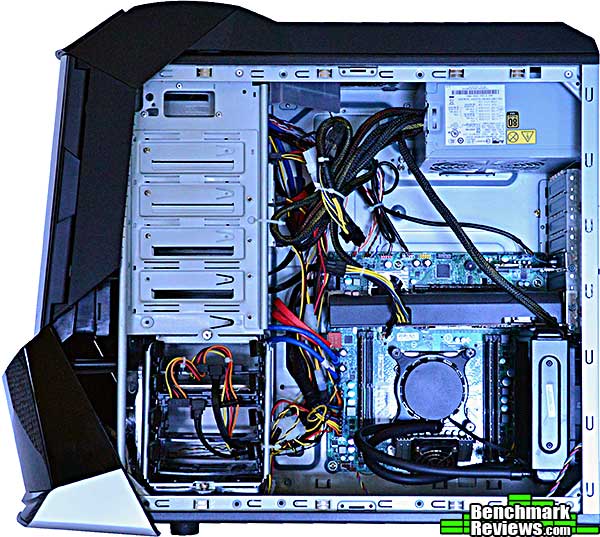