The 625 arrives in a rather plain white box, but that’s the only thing plain about it. In Swiftech like fashion, the fan wires are wrapped in what looks like heat shrink tubing, ending in a three pin connector. I would advise against using a motherboard header to connect the fan to power it, as very few motherboard headers can handle the wattage output of the Delta fans.

Another class feature is that, not only is the 625 supplied with a grill to protect any limbs that may happen to come in contact with it, but the use of high quality push pins to attach the grill to the fan eliminates any grill vibrations.

The DY1206BH-625 is a good size heatsink, 121 (L) x 124 (W) x 65 (H) mm and weighs in at a hefty 420 grams. There are 36 paper thin fins that are soldered together (similar to the Thermalright SK-6), a gold colored shroud covers three sides of the heatsink. Its very design, with an extremely large surface area, requires the use of a powerful fan like the Delta, to achieve its high performance level. Even with its size the 625 is compatible with the majority of today’s motherboards

The contact (bottom) of the heatsink has the familiar 4 punch marks for locating a thermal pad, which we never use; we’ll be using Artic Silver II spread in a very thin coat on the core of our CPU only!!

While the samples I received could have used some polishing, the area between the punch marks was smooth as silk and the non-polished/lapped surface did not affect the 625’s performance.

Using a metal rule, we found the bottom to be flat (we couldn’t see light between the heatsink and the rule). Another interesting feature of the bottom is the depth of the channel on three sides of the heatsink; it’s one of the deepest I have seen at 1/8”.

At this point, I know many of you are still thinking about the weight of the 625. Is it going to cause a problem and what about installation?? It seems that Dynatron Corp. was one step ahead of us and was aware of our concerns. Their answer can be seen in the picture. A three pronged clip similar to the one used on Taisol heatsinks was their answer.

Before we continue, make sure you’ve applied a thin coat of Artic Silver II to the core of your CPU, with that done gently place the 625 on top of the CPU (gently now) making sure that the clip aligns with the sockets three flanges/lugs, hook the rear of the clip over the three flanges/lugs (there is a tab jutting out from the clip that helps to make doing this easy). Now, position your screwdriver in the front of the clip, press down and outward until the three pronged clip attaches cleanly to the front flanges/lugs, the 625 is now installed and rock solid on the CPU. Attach the fans three pin connector to a three to four pin converter (not supplied) and then to one of the power supply connectors. At this point, you’re ready to go!!!!

As a word of warning; never ship or transport a computer with a heavy high performance HSF in place, it is always wiser to remove it and then reinstall it when the computer has arrived at its destination.

Another point that needs re-emphasizing is the design of the 625/638 requires the use of a high-powered fan to achieve its performance level. Many of our readers have expressed distaste for the whine of the Delta fan. In our testing we have found a suitable replacement, the 60 mm Papst 33 CFM fan delivers almost the same performance level, but without the whine, however it’s still a loud fan at 43 dBA’s produced.

The Papst fan can be found in the USA at www.swiftnets.com and www.sidewindercomputers.com . As the Papst fans are more plentiful in Europe our European readers should check with the leading resellers there. Our friends in the UK can find them at www.chillblast.com. 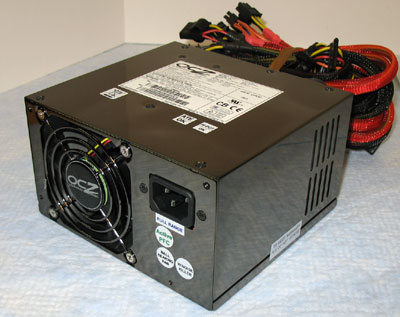