What article would be complete without taking on a controversial topic? I’m guessing there’s a minority of people in two camps and a majority in a third camp. The first two camps are convinced that fan stacking is either beneficial or a complete waste of time. The third camp contains those that couldn’t care less, haven’t thought about it, or don’t know the right answer. I’ll be blunt about it, fan stacking has its place, but that place generally doesn’t include the world of air cooling computers.

There are two ways to increase flow through a fan. The first is to run the fan at a higher speed. The second is to increase the static pressure at the fan’s intake. All other measures that “increase” a fan’s flow are merely measures to reduce flow resistance as identified earlier. Reducing flow resistance moves us to the right on our fan graph. Fan stacking seeks to use the second method listed, increasing static pressure. The idea is for the “top” fan to increase the static pressure (and air density) between itself and the “bottom” fan such that the total mass flow rate is higher than a single fan. This will happen, but only if certain conditions are met. Either the bottom fan must be specifically designed (blade profile, speed, and direction) to handle the air fed from the top fan, or the fans must have sufficient separation distance and a flow straightening device.

A jet engine is an example where the blade profile, speed, and direction of rotation are designed for stacking. The successive layers of blades are designed to work in harmony. Each layer has a unique blade size and shape. There are also occasionally stationary vanes for the purpose of re-directing flow. Computer fans have no such features.

The alternative is to separate the fans by a short distance and install straightening vanes so that flow from the first fan is directed straight into the second fan. This is possible, but would normally result in a stack too tall for a conventional computer case.

I can already hear the pro-stackers shouting their arguments. One argument is that a smart fan stacker would use a larger fan on top of a smaller fan, say an 80mm feeding a 60mm. Okay, this will increase the flow through the 60mm fan compared to the 60mm fan running on its own. It will not, however, exceed the airflow of the single 80mm fan mounted to an 80-60mm funnel. Others might say that you need a faster fan feeding a slower one. Again, the flow through the smaller fan will increase but still be less than the flow of the single faster fan.

If you wish to try fan stacking, be my guest. Do not, however, expect great rewards for your experiment. Do not be fooled if adding an 80mm fan atop your existing 60mm fan reduces temperatures. It should. What it won’t do is reduce them any more than using the 80mm fan with an adapter in place of your 60mm fan. The same goes for stacking a 60X38 high-speed fan atop your existing 60X25 low-speed fan.

Often times I see people claiming that they have 200 to 400 CFM of air circulating through their case. When asked how they achieve such flow, the reply is normally something like, “I’ve got two 100 CFM intake fans, two 80 CFM exhaust fans, and a power supply exhaust fan. Add those up and I get about 400 CFM.” This is very, very far from the truth.

To see why, we need to revisit our fan performance curve and apply it to case airflow. Pretend for a moment you have a case with a single exhaust fan. The fan may be rated for 50 CFM. In order to deliver 50 CFM, no flow resistance can exist. We know that some resistance does exist, however. For air to enter the case, it must flow through the holes and cracks in the case. To exit the case, it must typically flow past a fan grill. As a result, the true flow will be lower. Depending on how constricted the air inlets are, the flow may be much lower. Pressure within the case will be lower than ambient pressure.

After concluding that a single exhaust fan is insufficient, you may cut a larger, lower-restriction entrance through the case bezel. This will improve flow, but still keep it under 50 CFM. Some resistance through the fan grill still exists. Pressure within the case will still be lower than ambient pressure.

You may mount a 50 CFM intake fan near the opening in the case bezel. Now the situation gets interesting. Depending on the intake fan’s immediate surroundings, pressure within the case may become slightly higher or remain slightly lower than atmospheric pressure. If the intake’s restrictions are lower than the exhaust, the overall case pressure will be slightly positive.

Even so, each fan still has some flow resistance, so neither will pump more than 50 CFM. Two 50 CFM fans in a single case will provide somewhat less than 50 CFM of flow when one works as an intake fan and one works as an exhaust fan. 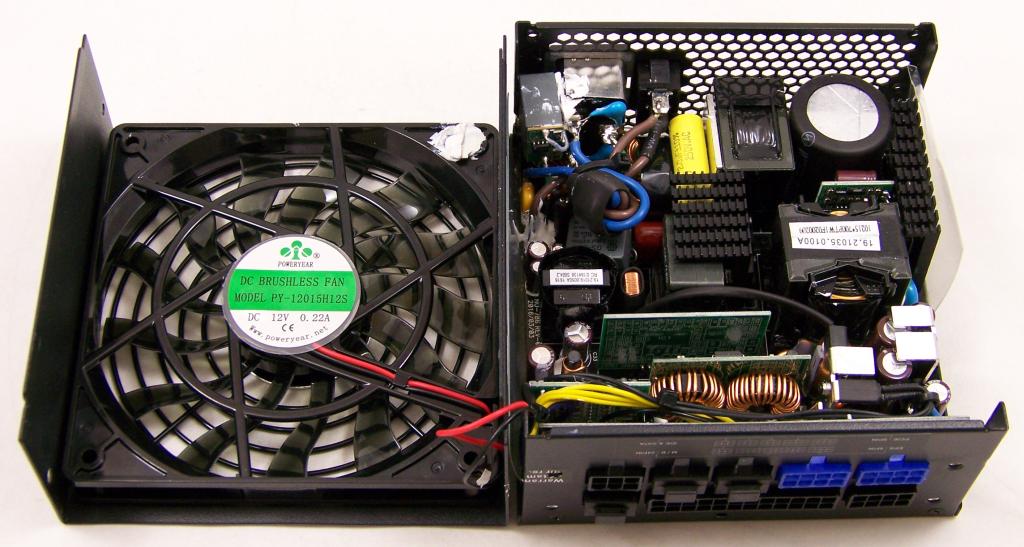 Honey I shrunk the PSU, 700W of SFX-L sized power from Silverstone 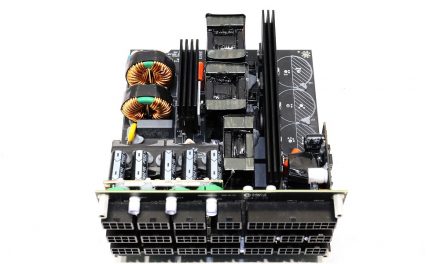