As you can see in this set of pictures, I have started by installing all of my drives from my old case. This is where I tell you the answer to the question, why. Part of my intent in this review is to as closely mimic the setup of my old case to see if the increased airflow and aluminum design can account for temperature changes. My old case only had mounting for the hard drives right below the floppy. That is why I installed them there in the Lian Li. Seeing as I have older ATA 33/66 hard drives, heat is not as much an issue as with modern hard drives. If you have modern hard drives, I would suggest installing them in the hard drive cage as this will expectedly help keep them cooler. I also have tried to employ proper cooling techniques with rounded data cables. You can also see the thumbscrews of the 3½” drive cage better as well.

Now for the fun part of this review, installing the motherboard. After removing the motherboard tray you can clearly see the 80mm fan mounted on the back. As my old case only allowed for a 60mm fan, this would certainly be an improvement. The fan comes wired with a 3 pin connector, but Lian Li has also supplied you with a 3 to 4 pin converter just in case you don’t want to plug it into a motherboard fan header. You can also see the provided I/O shield already installed with punch outs for all of your ports. The one thing that caught my eye that I hadn’t even thought of or considered was thumbscrews for all of the slots. What a cool idea that makes installation just that much easier.

You can also see how I install the board and decide where the standoffs should be. By using a marker you can just tip through the motherboard mounting holes and leave a little mark so you know where to install them. I have also preinstalled the front case wiring which was very easy with the quick disconnect provided for this wiring.

Installation of the motherboard went off without a hitch. With or without add-on cards, working with you motherboard whether it be the fan or the heatsink couldn’t be easier with a motherboard tray. I must say with this being the first time I’ve had the pleasure of doing an installation with a slide out motherboard tray, I will never go back to a case that doesn’t have one. It is undoubtedly in my opinion, the most worthy investment anyone could make in a case.

That’s all there is to it. Slide it in, and install the 4 thumbscrews for the motherboard tray and that’s about it. Plug in your data cables and reconnect the wiring harness for the front of the case and you’re done. Next is the power supply.

In the first two pictures above you can see there are only two thumbscrews that hold the PSU in place. This is not a problem because there is a little ledge inside the case to hold up the PSU allowing you to slide it in as you would the motherboard tray. The second set of pictures clearly demonstrates that you can mount the PSU in either configuration. As my old case did not allow this, I was unable to use a dual fan PSU. For some reason, they have the mount upside down, but with the PC-60USB, it doesn’t matter because you can mount in either direction. I have heard that installing dual fan PSU’s can be difficult because the increased size of the PSU makes it a little more difficult to install the standard way. As I do not have a dual fan PSU, I was unable to verify this. 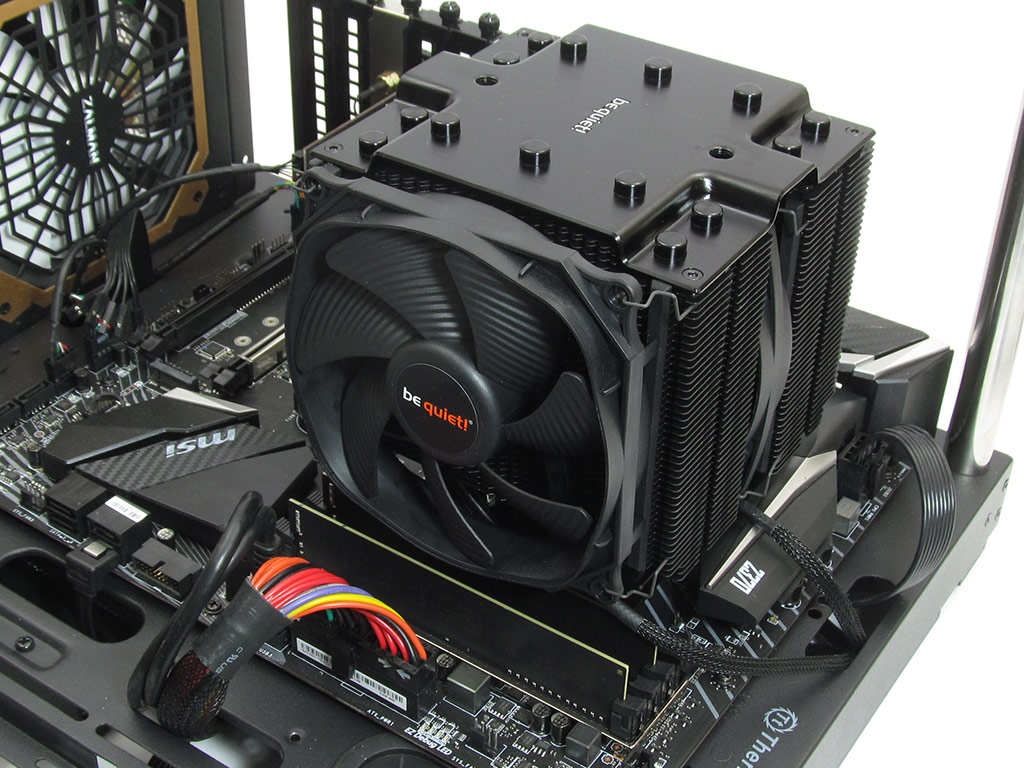 be quiet looks to knock out Noctua