Soltek has certainly produced a repeat of the success of the 75DRV4 motherboard by showing up with a motherboard able to out perform the competition in nearly all the tests we could throw at it. This fact speaks highly of the manufacturer’s ability to tweak the chipset it was given and the board it develops as well as possible improvements in the system’s BIOS.

The overclocking on the 75DRV5 was pretty successful, even though I wasn’t a big fan of how it needs to be done. The use of dipswitches is rather annoying, even when the motherboard is outside of the case so using your fingers to change the settings inside a case is simply horrible! 🙂 It is good to see at least FSB and Vcore adjustments available, but I can’t imagine it was very hard to go to the full bios option.

Feature set is another place that Soltek didn’t exceed the competition. There are no optional RAID versions of the board, no 6-channel audio and no USB 2.0 or Firewire. There is one additional header for USB ports and that’s about it. While the lack of extended features will appeal to many users, unfortunately, it will turn away just as many. Finding a common ground in that respects can be very difficult. But, the fact remains that other boards have been able to offer the end user more choices for add-ons to motherboards.

Check out Misr Corps to purchase your Soltek 75DRV5!

You can find a great price on the Soltek 75DRV5 by using the Amdmb.com PriceGrabber!

AMD Supports CrossFire On B350 and X370 Chipsets, However SLI Limited to X370 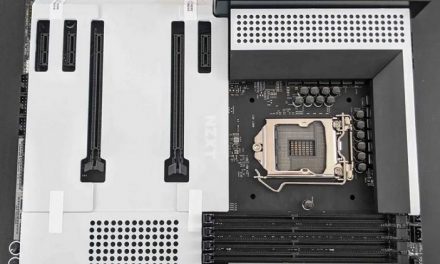