For those enthusiasts who want both high performance and quietness, they should look into adjustable fans. One can run these fans at full speed during the day and turn them down during the night. Three adjustable fans that are popular among the AMDMB.com users are Enermax, YS-Tech, and Thermaltake SmartFan2.

Enermax adjustable comes in a nice package which includes 4 case fan screws, a 3 pin to 4 pin adaptor, and a golden fan grill. The fan has a 3 pin connector, as well as a manual control knob. One thing I did not like about this fan was the short, small manual control.

If the control was a bit longer, it would be possible to mount the control at the front of the case.

At full speed the fan is very quiet. It does not have any high pitched noise like Tornado. At 56.8 cfm and 35 dB it is even quieter than Sunon TB1 and Mechatronics. If the noise level is too loud for you, you can always turn the fan speed down. When I turned the control ¼ away from full speed it is just as quiet as Panaflo L1A.

Because of the limited time, I decided to test the manual adjustable control function. The wire for the control is even shorter than Enermax’s which is rather inconvenient.

The fan is loud and can be heard even with all the case fans running. At 48 dB it is just as loud as the Delta fan and has a high pitched noise, though not as whiny as the Delta. When the fan is not as full speed, it is relatively quiet and performs well.

Unlike the Enermax or Thermaltake, I received the YS-Tech adjustable fan without any package. My first impression of the fan was, “wow, nice manual control knob!” The knob is very big and the wire is long enough to mount the control at the front of the case.

The fan’s output ranges from 10.2 to 48.2 cfm. At 48.2 cfm, the fan has a noticeable noise. Though it’s not high pitched, it can be rather annoying. Comparing this fan to Mechatronics, this fan is a bit louder.

Overall, comparing all three adjustable fans side by side, Enermax is the quietest of all three without a doubt. Smart Fan 2 is the loudest, while YS-Tech is in the middle. The following picture is a comparison between the lengths of the manual control. As you can see, YS-Tech has the longest manual control out of the three.

Just like its big brother the Vantec Tornado, the Vantec Stealth comes in a nice package. The package includes 4 case fan screws and a 3 pin to 4 pin adaptor. At 27 cfm and 21 dB, the fan is very quiet. When my system was running and the Vantec Stealth fan was used, I could not even hear the fan. For most enthusiasts, Stealth does not produce enough cfm to be used as a heatsink fan. It is, however, an excellent choice for case fan. If you want high performance case fans at low noise level, Vantec Stealth is certainly your choice.

Just like its big brother the Panaflo H1A, the Panaflo L1A comes in bare wire format. You can use the fan with a 3 pin or a 4 pin connector. At 24 cfm and 21 dB, the L1A is extremely quiet. When the L1A and Vantec Stealth are compared side-by-side, the L1A is clearly the winner in a noise contest. Though Panaflo L1A is not the choice for heatsink fan due to the low cfm rating, it is an excellent choice for case fan.

Cyber Cooler LED fan is the first LED fan I have ever used. It has 2 blinking blue LED’s which can give your computer the “extra attention” it needs. The fan does not have a good cfm to dB ratio, but this seems to be common for most LED fans in the market today. At 30 cfm and 27 dB, the fan is very quiet. With the computer running I was not able to hear the fan at all. Though I don’t have a case window, it was still pretty neat to see blue lights coming out of my case. If you have a window for your case and want to “show off” I would highly recommend using a LED fan. 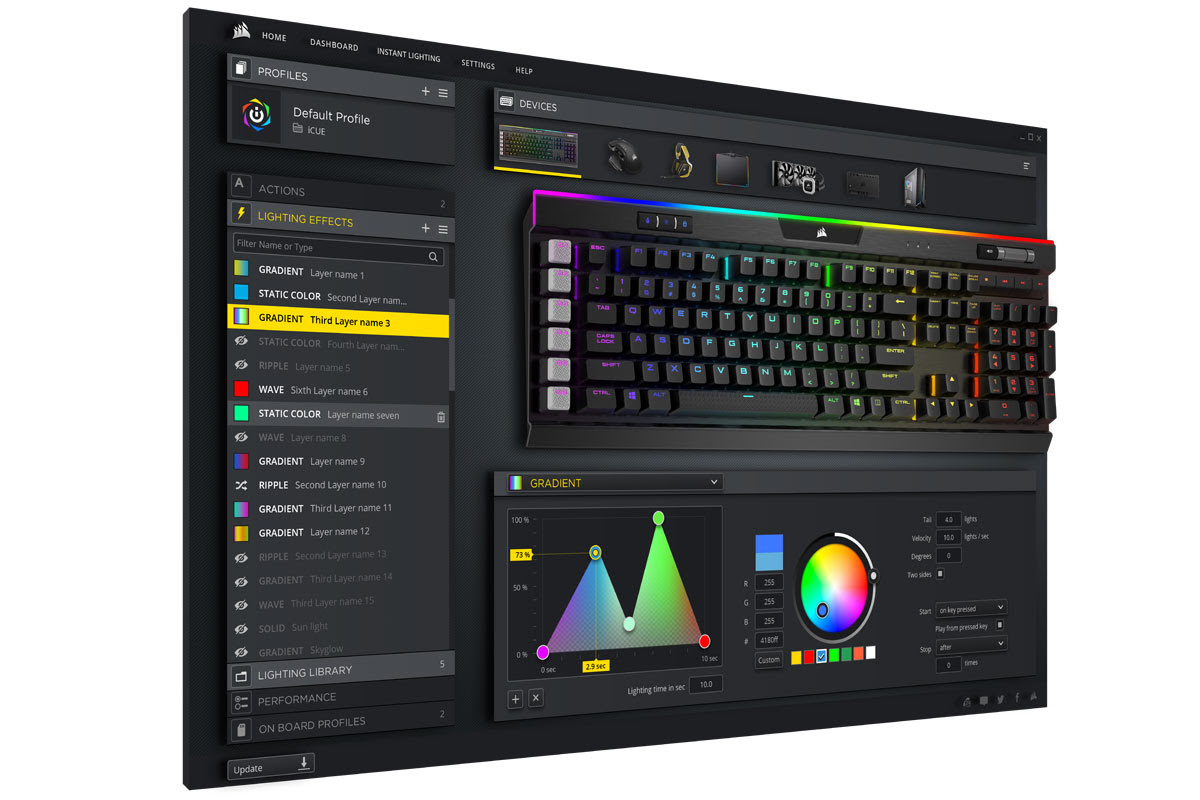 Power to spare from Corsair