How do I overclock my memory?

On modern systems, memory is very rarely, if ever, overclocked for the sake of overclocking memory. Lemme rephrase that, people don’t overclock memory to make it run higher than what is actually needed. There are many instances where memory is even underclocked. You first determine the default frequency of your memory, 1MHz higher than that frequency is the point where overclocking begins. Now how do you increase that frequency? As previously discussed, best performance on all PC platforms is gained by running the memory frequency synchronously with speed of the FSB. This means that for every 1MHz the FSB is increased, so too will the frequency of memory clock. So in effect, memory overclocking is just a part of overclocking your processor. They are done simultaneously. Since FSB frequency and Memory frequency are most times made to be the same, this poses a problem – as overclockers look for the highest possible FSB while the memory may struggle behind because it’s not able to keep up synchronously. Unlike CPU overclocking or video card tweaking, adjusting memory timings and frequencies offers very little physical risk to your system, other than the possibility of a windows failure to load or a program failure while testing. The memory will either be able to handle the overclocking/tweaking, handle it with instability or not handle it all. There are no grey areas in between, it either does, does with problems, or doesn’t at all. This makes it a bit simpler to quickly find the precise limits of any memory.

The memory timings can also play a role in how far the memory will go, in keeping with the FSB. Lower timings (numbers) will hinder how fast the memory can run, while higher timings allow for more memory speed. So which is better, lower timings or higher memory speeds? Why not both! Overall data throughput depends on bandwidth and latencies. Peak bandwidth is important for certain applications that employ mostly streaming memory transfers. In these applications, the memory will burst the data, many characters or bytes after each other. Only the very first character will have a latency of maybe several cycles, but all other characters after it will be delivered one after another. Other applications with more random accesses, like most games, will get more mileage out of lower latency timings. So if you have to choose, weigh the importance of higher memory clocks against lower latency timings and decide which is most important for your application.

Sometimes a little extra voltage is all that’s required to encourage your defiant DDR to straighten up and fly right. You can adjust the ddr voltage quite easily through your motherboard’s BIOS as you would for your CPU’s voltage. Like CPU overclocking, raising memory voltage above default (default is usually between 2.5v – 2.7v for DDR) at higher memory clock speeds may aid stability and/or enable you to use lower latency timings. Although the ddr voltage has nothing to do with the CPU itself, it plays an integral part in the big picture. If we are running a synchronous mode (1:1), then for every 1MHz increase in FSB speed, the RAM speed will increase by 1MHz. So in these cases an elevated memory voltage will often prove helpful in maximizing the overclocking potential of the CPU.

A few points to consider when raising memory voltage:

Do I Need Ram Cooling?

Memory cooling has become very popular, most notably on video cards. The effectiveness of memory cooling on both system ram, however, is often fuel for lengthy discussions on many internet hardware forums, including our own message board. Does system memory get hot enough to require cooling? Depends on what you consider is hot. My opinion is that memory modules never build up enough heat, to require any sort of cooling. Even when overclocking, they still stay pretty cool. If extra cooling, puts your mind at ease, then go for it, but you can’t necessarily expect better overclocking results or even any extensions in the life of your overclocked / overvolted memory. Premier manufacturers such as Corsair, Mushkin, and OCZ ship their modules with heatspreaders across the chips. They look very nice and are often solid copper or aluminum. A handful of other companies sell ram cooling kits, and other solutions for modules that come without cooling. Ram sinks are pretty much the same as standard heatsinks for graphics chips and CPUs, except they’re a lot smaller and tailored for RAM chip sizes. Most reliable tests show these heatspreaders & kits to do VERY little as far as cooling the memory goes. With no real benefit, placing these cooling kits on memory modules is more for looks than for cooling, and that can be appreciated.

Burn-in can be defined as the process of exercising an integrated circuit (IC) for a period of time at elevated voltage, speed and temperature with the aim of improving performance. With CPUs it’s another one of those debated topics, but in my experience “burning-in” memory does make it perform better. The time required varies and it doesn’t always work, but it’s worth a try. A tutorial on how to go about doing this. If your DDR400, for example, doesn’t run stably at 220MHz, try something lower. Leave the computer on for a few days straight. Give it a workout, and then try it again at 220MHz

Memory Chips and their Importance to Overclocking

Very few companies in the world actually make memory chips, but literally hundreds of companies sell memory modules. Some of these few companies are Winbond, Hynix (Hyundai), Micron, Samsung, Infineon (Siemens), Nanya, Mosel-Vitalic, TwinMos and V-data/A-data. Like most other PC components, all RAM are not created equal. For DDR400, you can find memory varying from – very fast modules sporting 2-2-2-6 timings from Mushkin, Corsair, OCZ, Kingston (for example), to relatively low-cost modules that aren’t as favorable with the timings. Even memories of the same brand and model may exhibit varying performance levels because of the chips being used. Manufactures use whatever memory chips are available at the time, and certain memory chips don’t stay in stock indefinitely.

Take a look at the markings on the chips of your memory module. If your module has heatspreaders, it will have to be carefully removed to see the memory chips. (Doing so will void your warranty). Each chip is covered with numbers and those numbers have tell what chips they are and may even have the logo and name of the chip maker. Why does this matter? Like motherboards, for example, not all brands offer the same performance and overclocking potential. The same goes for memory chips. So people (usually overclockers) seek out certain preferred brands of memory chips for their systems. Example, Winbond’s famed BH-5 which was discontinued, then reintroduced and then was discontinued again to be replaced with newer cheaper CH-5, although there still is relatively high demand for the highly overclockable BH-5.

Check your module manufacturer’s website, they may or may not list what chips they use their modules. 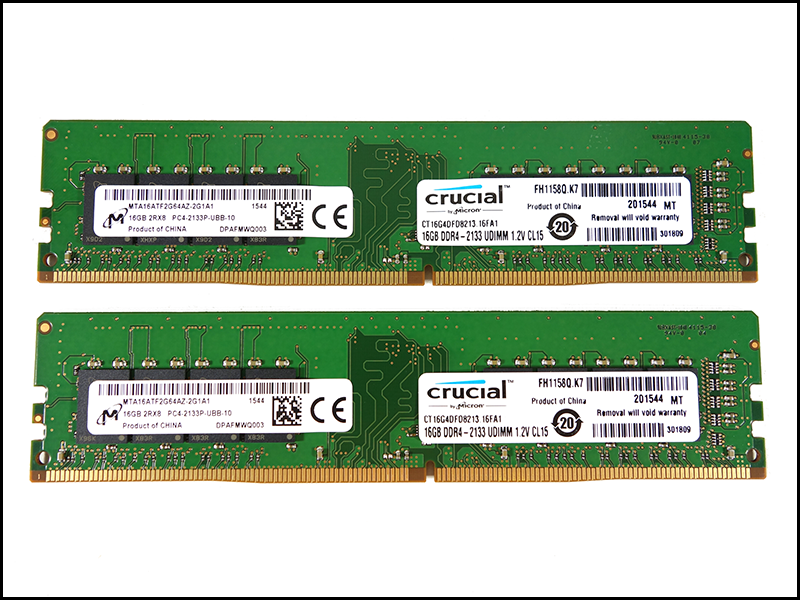 Low Latency is a relative term