The look and feel of the eMachines M6805 is about what you would expect from an HP or a Compaq computer — nothing flashy like you might see from Sony or Apple.  The top has a brushed aluminum look to it with a nice flat black color as well.  On the sides are glossy black plastic plates; you know the kind, the ones that get smudgy all the time.  🙂 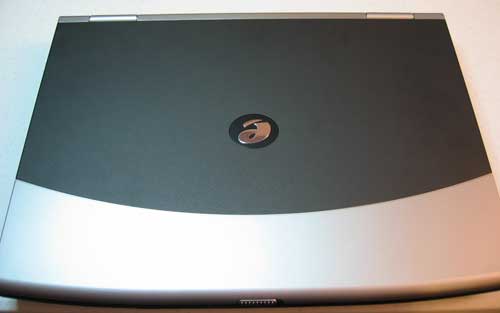 The front of the casing on the M6805 features the flip lid button as well as the speakers and LED power and charging indicators.  The flip clip seems fairly sturdy and after two months of using several hours a day each day, I’ve noticed no loosening in the tension or other defects with it.  The LED lights on the front come in orange and purple colors, one indicating power the other indicating connection to AC power.  The purple light will blink for low power as well.  The speakers on the front sound decent for notebook audio, but I have heard better coming from the likes of the Harmon-Kardon speakers that Toshiba has included on their more recent multimedia line of notebooks.  But as with any notebook computer, your best audio experience is going to come from using headphones.

The left side of the M6805 is where your Firewire, two of your USB 2.0 ports, memory card readers and PC Card slot are located.  An exhaust fan is located here as well to expell some heat from the processor.  The memory card reader turned out to be one of my favorite features of this notebook as I was constantly using this machine on business trips and taking photos with my digital camera.  Not having to carry around a card reader or USB cable for the camera just made travelling that much easier.

The opposite side of the M6805 houses the DVD-ROM/CD-RW combo drive.  I was able to burn CDs very easily here, making my travelling music selection that much easier to deal with.

The rear of the laptop includes (from left to right) power input, microphone and headphone jacks, RJ-11 (telephone) and RJ-45 (network, 10/100 speed), VGA output, two more USB 2.0 connectors and finally an S-Video output.  A couple of exhaust outlets are there for good measure.  There is a notebook security attachment on the far right on on the back of the M6805 as well. 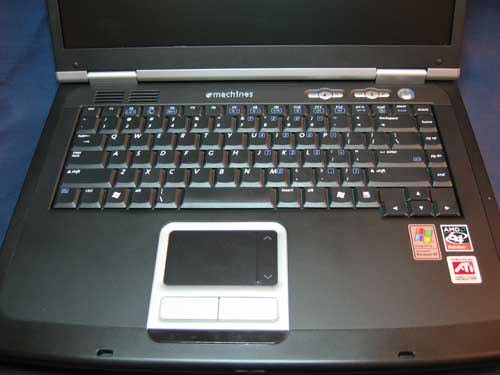 Opening up the lid shows you a moderately designed keyboard and mousing interface with the 15.4″ widescreen display filling in the void behind it.  The top row of buttons allows you to easily change the volume of the audio or mute it by pressing both button simultaneously.  The center music note icon can be used to open your default music application.  The next three button are hot keys for accessing your mail client, Internet browser and search window.   The power button is also used for your standby option but can be configured in the Control Panel as well.

The keyboard layout itself is typical of most standard notebook keyboards.  Because the system is a widescreen layout, there was spacing on the outside of the keyboard that would not normally exist, so eMachines did expand the keys a bit to make it closer to standard key widths and heights.  Unlike other laptops we have used, the M6805 does have independent Delete, Home, PgUp, PgDn and End keys; a welcome change from having to hit a function key and and arrow key to access them.  For me at least, this made editing and typing documents much easier.  The keyboard does have a function key driven number pad that corresponds to the 7-8-9 and below keys.  There are also Function hot keys for wireless networking enabling and disabling, screen brightness and more. 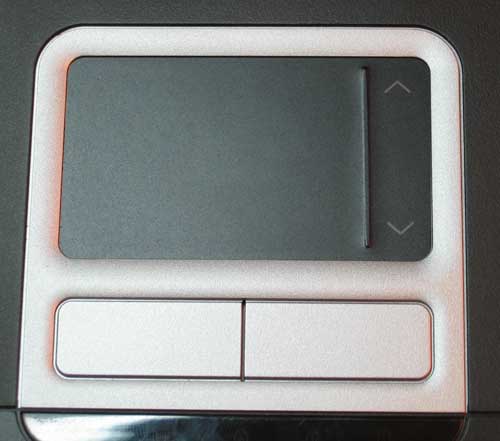 The mouse surface is a touch pad design with two button for left and right clicking.  The area to the right of the touch pad is a scroll pad, that you can you use much like a scroll wheel on a standard mouse to scroll down web pages or any application that supports the wheel mouse.  Finally, the wrist-rest area on the keyboard, to the left and right of the touch pad, is noticeably softer than the rest of the case and seems to handle the oils and sweats of human hands better than even my main PC’s keyboard. 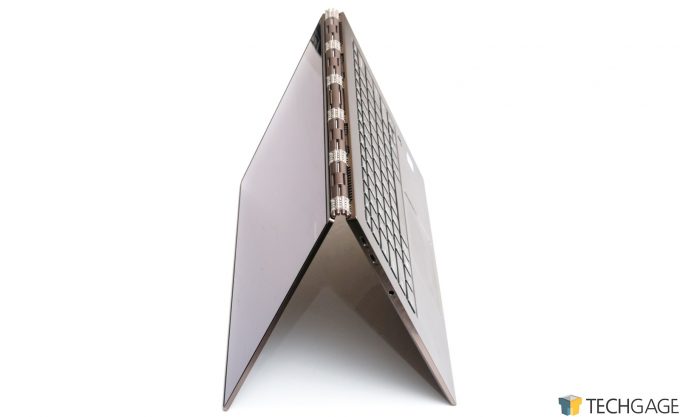