As graphics in today’s games move forward at an alarming pace, we become much more critical of the finder details of the image we are presented with. We are now at a point where graphics have progressed enough for us to now see all the imperfections apparent within a given scene. Graphics card vendors have come forward with methods to alleviate these issues, though at the cost of performance. Since these features have been introduced, each vendor has made great efforts towards maximizing the image quality of the scene while minimizing the adverse effects those might have upon performance.

With the launch of the new GeForce 6 Series architecture, NVIDIA is introducing a new premium setting for Full Scene Anti-Aliasing. Whereas the previous maximum setting was ‘6XS’ on the GeForceFX 5950 Ultra, the new GeForce 6800 Ultra now has ‘8X’ as an option. 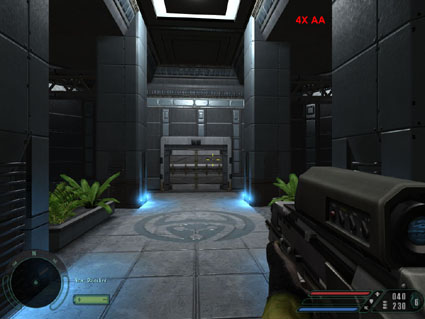 By clicking on the image above, you can see an animated sample of the image quality achieved with each level of FSAA. As the animation progresses, you will notice that the jagged edges in the scene gradually become less apparent. A good point of focus to see this is the white ring of light in the center of the ceiling. Now, as the animation makes its way to the ‘8X’ setting, you will see that something is clearly wrong. The light-effects have disappeared and the image is dramatically different than with previous methods. This is not a case where corners are being cut through new methods. Rather, this is simply a small bug with the driver which NVIDIA has since been made aware of. Surely, this isolated issue will be fixed well before any consumers get their hands on actual boards. With this minor bug aside, we can clearly see that NVIDIA’s image quality has drastically improved. Though the ultimate winner of a scene quality comparison still depends on what angles are most prevalent, it is not unrealistic to now call the two as being equals.

As was the case with FSAA, NVIDIA is also introducing a new premium setting for Anisotropic Filtering. Although the previous maximum setting of ‘8X’ is still present, the drivers now offer the user the option of ’16X’. Although this setting will provide the highest quality with regards to AF, our initial testing has shown us that 8X is still the best option for maximizing image quality and performance. 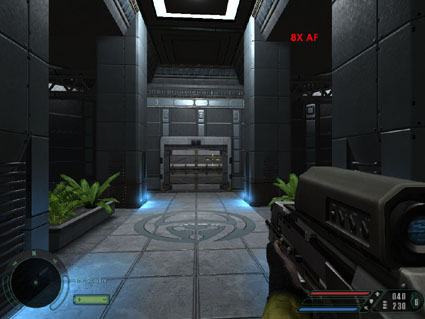 Those who click the image above will see the various levels of Anisotropic Filtering in action through an animated sequence. Though you will likely have no trouble seeing which areas are benefiting from AF, the most pronounced area would be the tiles on the floor directly in front of the door. As we stated above, the 8X AF setting seems to provide an excellent image with a relatively small performance penalty. In fact, we find that 8X and 16X are nearly indistinguishable from one another, though the 16X setting does have a very adverse effect upon overall performance.

Often times, people make claims that one vendor’s image quality is better than the other’s. In order to cut straight to the chase, we captured the exact same image from each of the three cards using 4X FSAA and 8X AF. As you might have guessed, we will be referencing an animated image comparison which can be seen by clicking the image below. 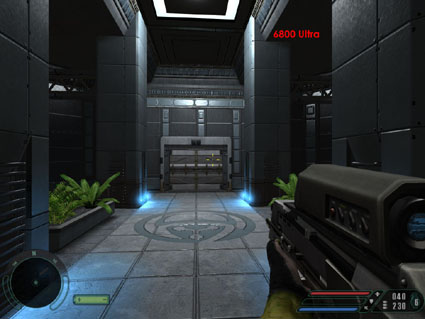 Those who doubted ATI’s advantage in image quality thus far might find themselves looking for a whole to crawl into once they see how the GeForce FX 5950 Ultra fares against the 9800XT. However, NVIDIA fans no longer need to cower when FSAA and AF are brought into the picture. Looking at the image for the GeForce 6800 Ultra, we see that NVIDIA has made tremendous progress in the quality of their image. Indeed, the only appreciable differences between the two seem to be resulting from a difference in lighting.