NVIDIA, when looking for a way to have its products differentiated from their competitors and better their product line, turned to their newly acquired networking staff in Santa Clara.  They wanted to offer the best performing networking for their chipset and needed to get over a few hurdles to do so first.

Most all motherboards that you will see for sale today offer on-board networking of some kind.  This is done through an on-board chipset from a third party manufacturer or via an ethernet MAC component on the motherboard’s chipset.  These network connections were treated as any other PCI networking device, basically imitating the installed PCI-card solutions that you would otherwise purchase.  While the PCI bus was able to keep up with the bandwidth required for 10 mbps and even 100 mbps data transmissions, when Gigabit (1000 mbps) networking solutions were introduced, the PCI bus became the major bottleneck. 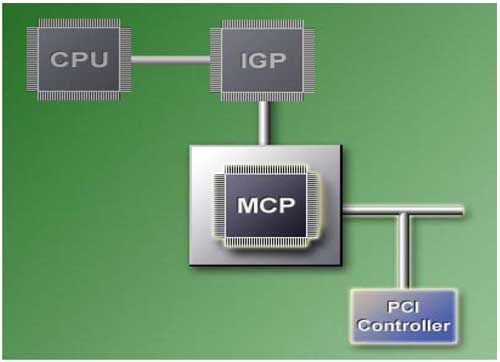 Considering that the PCI bus is already filled with data from your storage, audio and other add-in cards, NVIDIA wanted a solution to better handle the increased performance of the Gigabit networking connections.  They achieved this by giving the Gigabit Ethernet a dedicated port for the NVIDIA MAC on the chip level.  This thereby got rid of the bus contention problems and increased the possible throughput levels dramatically.  What’s more is that NVIDIA designed this solution to be able to integrate with any industry standard Ethernet PHY from any vendor.  This lets board integrators use competitively priced equipment from a range of vendors. 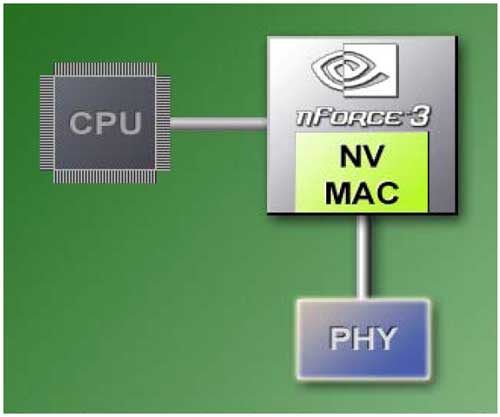 I am sure that many of you are telling me that your particular Athlon 64 or XP motherboard already supports Gigabit networking.  And while this may officially be the case, you will be surprised by the numbers we are going to show you below.

The software we used for the testing was IxChariot, an industry standard for traffic emulation and testing used by the likes of Cisco and 3Com.  This software works with a server and a client, the client being the system that is under scrutiny.  The server used was a dual-Xeon class machine with a 64-bit 66 MHz bi-directional Gigabit networking card capable of supporting large frames.  This card retails for about $1500USD but was necessary to fully saturate the Gigabit network in both directions to get an accurate test.  The three screen shots below show the results from the testing on IxChariot.

Here are the results from the Abit KV8-MAX3 with Broadcom Gigabit Ethernet on-board.  You can see the Average throughput is only 633 Mbps when the theoretical maximum is 2000 Mbps (1000 Mbps both ways).  This is a result of the saturation of the PCI bus as well as the latencies involed in the bus as well.

Finally, we have the results from the testing on the nForce3 250 Gb reference board with on-board Gigabit MAC.  You can see we have an astounding jump to 1785 Mbps throughput, nearing the theoretical max of 2000 Mbps.  We should also note that during our testing, the nForce3 board also had the LEAST processor usage during these tests as well.

Keep in mind of course that these stress tests are exactly that — tests meant to stress the maximum potential of the networking system.  Will you often being attempting to use the full 1000 Mbps of either direction?  If you have an in home network that is able to utilize Gigabit networking, and all the systems are using this platform, then yes, you should see a nice increase in file transfer speeds.  But networking always runs at the speed of the slowest partner, so if you other systems are using 10/100 NICs still, this Gigabit technology won’t help you.  It is indeed a great step from NVIDIA as the saturation of Gigabit networks in the home and office increases.