VIA introduces another chipset for the Athlon 64 platform in preparation for the coming changes to the A64 platform and motherboards in general.

When VIA released the K8T800 chipset in the fall of last year, it was nearly an instant success.  More motherboard manufacturers picked up on the VIA offering for the Socket 754 platform than NVIDIA’s original nForce3 150 Professional chipset.  We first looked at the nForce3 offering here, in our Opteron 144 review back in September of 2003 and our first VIA K8T800 motherboard review was of the Asus K8V Deluxe in October.  VIA’s K8 chipset offering provided the manufacturers and users advantages on both the performance and on the features side of the equation, making the K8T800 easily the most successful chipset of the Athlon 64 platform thus far.  VIA is now expanding the features on their current generation chipset and preparing it for the upcoming features from both AMD and the industry, including Socket 939 support, 1 GHz HyperTransport bus support and finally, the overclocking features readers have been asking for.

To be completely honest, the changes from the K8T800 to the Pro version of the chipset are not as vital as we will see in the move to the K8T890 chipset later this year.  For one, the LDT bus, or HyperTransport connection between the processors and the northbridge now supports speeds of 1 GHz at 16-bit bus width.  This bus is called the “Hyper8” bus. 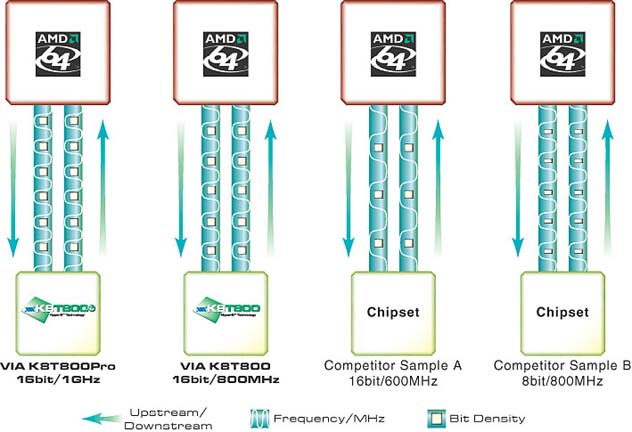 Image provided by VIA Technologies

This diagram illustrates, though with an exaggeration, the benefits of additional speed and bus width on the LDT bus.  The faster the bus and the wider it is, the more data that can be distributed between the processors (and therefore memory) and the rest of the components in the system.

Image provided by VIA Technologies

Make sure you are not mistaking this LDT/HyperTransport change as an increase in the internal FSB of the Athlon 64 processors.  They are still going to run at 200 MHz by default, and this bus speed increase is ONLY for trasmitting data between the processors and north bridge.

The next additional feature that the K8T800 Pro offers is locked AGP and PCI buses.  Increasing the FSB of the processor to overclock its frequency no longer forces the user to drag their AGP and PCI busses above their specified 66 MHz and 33 MHz respectively.  This was one of the major draw backs of the original chipset as the nForce3 chipset did in fact keep the buses locked.  VIA is now up to speed there and should offer similar overclocking potential for the end user — and as soon as we get a retail board, you can be sure we will find out.

The K8T800 Pro chipset has also added support for the upcoming Socket 939 processors from AMD.  These processors which are going to be using dual-channel, unregistered memory are going to bring the speed and power of the Athlon FX line into the mainstream enthusiast market.  VIA’s new K8T800 Pro chipset now has support for it fully integrated and ready to go as soon as AMD pulls the lever.

I say “kind of” above because if you are looking for a PCI Express ready Athlon 64 chipset from VIA, you are going to have to wait for the K8T890 later this year.

Performance has also been improved slightly on the Pro chispet as well, so be sure to check out the benchmarks on the following pages.