The VIA K8T800 Pro chipset is a great addition to AMD’s arsenal for their Athlon 64 platform.  While no significant performance increases were seen, those that we did see should be noted as impressive.  Since AMD has removed the memory controller from the chipset designers bag, companies like VIA, NVIDIA and SiS have been finding it increasingly difficult to make their product stand out from the competition.  VIA did so with the K8T800 with the slight performance gain and better value with features, but the newly released NVIDIA nForce3 250 Gb chipset is going to make this time around much more difficult on VIA.  (Expect a full review of the NVIDIA nF3 chipset very soon.)

Until the nForce3 250 chipset motherboards reach the end users, the VIA chipsets have one more chance to hold on to their marketshare lead in the AMD K8 market.  That lies in the K8T800 Pro north bridge and the VT8237 south bridge. 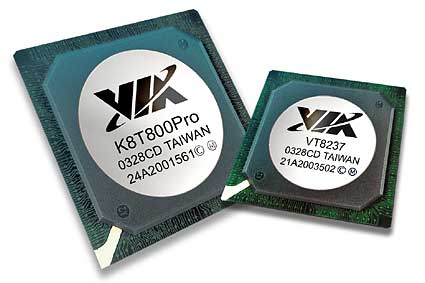 The addition of the LDT bus at 1 GHz, locked AGP and PCI frequencies and support for Socket 939 processors is a welcome addition, but the nForce3 is not going to be leaving much to be desired either.

If you have a current generation K8T800 motherboard, I wouldn’t recommend you start looking for a Pro solution to replace it with — the differences between them are not great enough to warrent a new purchase so soon.  However, if you plan on moving into the realm of Athlon 64 sometime soon, the VIA K8T800 Pro chipset is a great choice and offers a lot of features on boards that are reasonably priced.

Ah, there’s the catch.  If you wanted the honest opinion of this man, I’d recommend not upgrading your system to ANY Athlon 64 platform until you have seen the Socket 939 processors and what they are going to offer the PC enthusiast market and at what price.  Knowing that both Socket 754 and Socket 940 are going to be phased out in the market, it makes it a tough sell on either right now.