With the release of the 939-pin processors from AMD, the motherboard begin to creep out of the woodwork. We look at two retail boards as well as an NVIDIA reference board.

Along with the release of the new processors from AMD today (see accompanying article), various motherboard manufacturers have been gearing up for the release of the new socket as well.  Before even the day of launch, I have heard more excitement from the motherboard community for this transition than from any other AMD product.  No doubt because they now know they are in a stable platform and they can work their engineers to design outstanding boards without the threat of socket changes and processor upgrades to deem all their time wasted.

We are going to be taking a preliminary look at three motherboards today for the 939-pin processors.  The first is the motherboard sent to us to use during our review of the new AMD processors, the MSI 6702-E based on the VIA K8T800 Pro chipset.  The second is from Asus: their A8V Deluxe motherboard also based on the VIA K8T800 Pro chipset.  The final motherboard is an NVIDIA reference board using the new nForce 3 Ultra chipset announced today in conjunction with the 939-pin processor announcement.

These first looks are not full reviews, as I got all the boards and the AMD processors much too close to my Computex trip to give them each the time they deserve.  We will be showing you images of the boards, giving you a quick overview of the features included and then jumping straight into the benchmarks.  After I return, I’ll get deeper into the overclocking potential of each board, the bios and more. 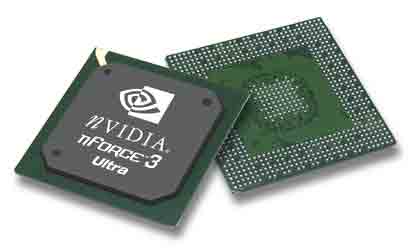 Gigabyte gets it right