I wanted to show you how the AI N.O.S system worked with your applications so I simply utilized the latest version of CPUID and a trial run of ScienceMark 2.0 Beta to stress the processor a bit. 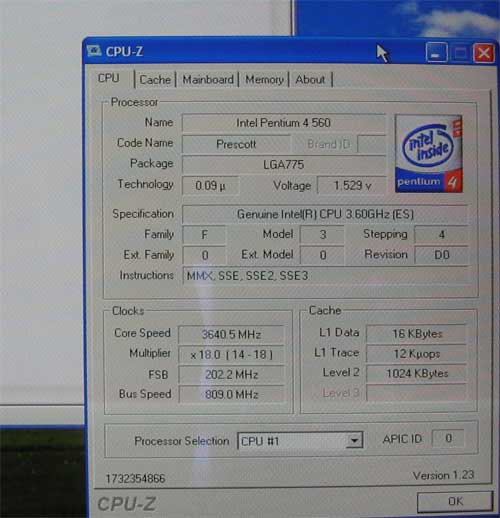 Here is the default FSB on the Asus P5AD2 Premium.  Notice it’s actually running at 202.2 MHz, instead of 200 MHz — this is a problem that Asus seems to have accidentally spread to all their latest motherboards including their Socket 939 A8V Deluxe and even their Socket 462 A7N8X-E motherboard.  All of them won’t run the FSB at 200 MHz but only at 202 MHz.  To me, this is obviously an attempt by Asus to show their boards performing ever so slightly faster than their competitor’s boards, to those that wouldn’t check this kind of data out.  It was literally impossible for me to get a 200 MHz bus on this motherboard; setting the bus to 199 MHz gave me a 199 MHz result and setting it to 201 MHz gave me a 201 MHz FSB, but setting it to 200 MHz would only show 202 MHz. 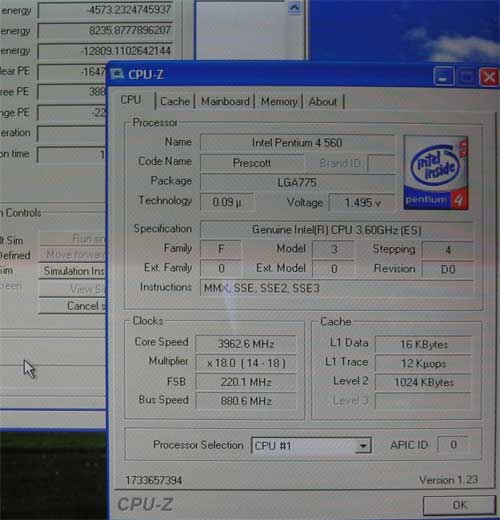 In any event, with AI N.O.S. enabled, and after starting the run of ScienceMark 2.0 Beta, the system automatically increased the FSB of the processor to 220 MHz, resulting in a clock speed of 3.962 GHz, a 360 MHz increase in clock.  Notice that the voltage on the processor showed as going down during the overclock, but I am thinking this is a bug in the CPUID software.

The system setup for our Asus P5AD2 motherboard tests is the same as we used in our original Intel reference tests last month.  The AMD test setup of course does not use DDR2 memory or PCI Express graphics, but we used the closest facsimiles that we could in order to get as accurate a comparison as possible.

New and improved, or just new