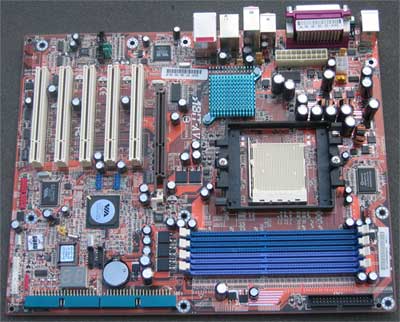 The Abit AV8 motherboard layout is well done with a few interesting placements that are beneficial to the enthusiast and DIYer. 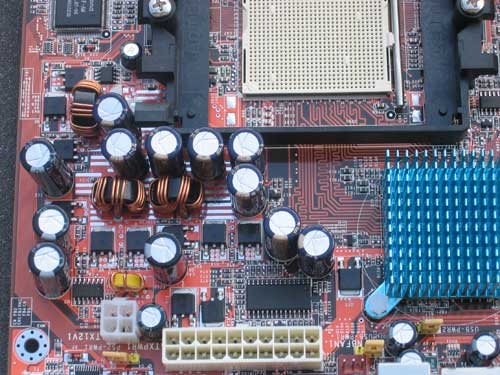 The first area we’ll look at is the processor socket which is interestingly built by a company called Lotes, where as all the other sockets we have seen recently on both AMD and Intelboards have been the products of Ajigo or Foxconn.  Notice here as well that the capacitors are are placed very close to the retention socket of the processor.  For all standard heatsinks including the retail versions, this is not an issue, but we haven’t really seen all the third party cooling solutions for the K8 processors yet, and how they fit dimensionally on the motherboards.  They did NOT interact with our Zalman heatsink, however.

You can also see the north bridge of the K8T800 Pro chipset covered by a shiny blue heatsink.  It seems to be high quality and did disperse heat well enough that I never had a problem with the north bridge during overclocking tests.  I would recommend removing the thermal paste they have underneath the heatsink and replacing it with the same quality that you would use on your processor, but this is a recommendation I have for nearly every motherboard we look at. 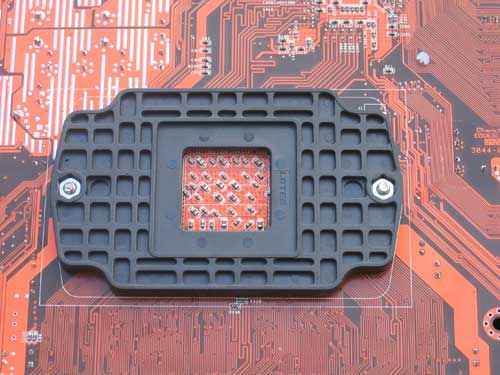 This is the bottom of the Lotes heatsink retention system, and as you can see it is just slightly different from what we have seen before.  It is just as effective in what it does, but it seems to be a bit easier for installing and removing this clip. 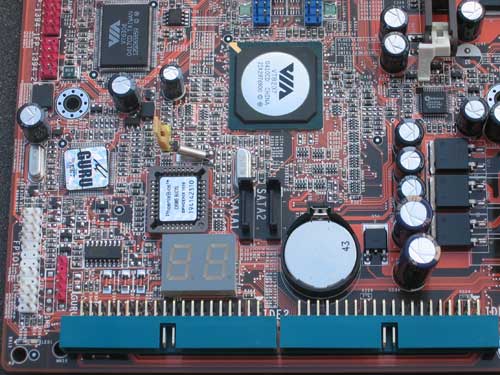 Moving down to the storage channels, we have here the two IDE channels and two SATA channels that the VIA 8237 south bridge provides.  I especially like the placement of the IDE channels, facing away from the motherboard itself, making in-case installation a bit easier and freeing up the clutter that you see when looking at a motherboard in its natural habitat.  This also makes it less likely that any other components including AGP cards and memory will be in the way of your IDE cables, or vise versa.  Note the south bridge provided SATA channels do support RAID 0 and 1.

Abit included a diagnostic LED for boot up and POST issues and easier troubleshooting with the help of a quick reference section in the manual.  I do wish they would have color-coded their case jumper connectors (the all white section of pins on the above image). 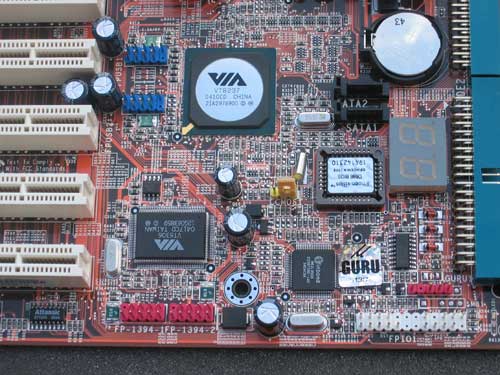 Here you see the two Firewire (red) and USB 2.0 (blue) headers that allow you to add those additional ports to your PC’s back panel or front if your case supports it.  The VIA VT6306 is responsible for the Firewire support.  What is really the focus of this image is the elusive “uGuru” chip that in fact is a Winbond chip en cognito. 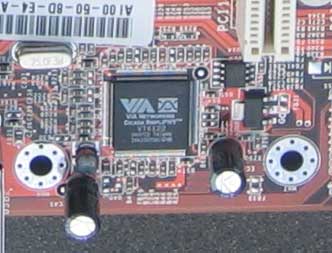 The AV8 motherboard does support a lot of great features like the ones we mentioned above, as well as Gigabit ethernet, provided by the VIA VT61122 chipset, codenamed the “Cicada SimpliPHY”.

The external connectors also reveal the sound capabilities on the Abit AV8 including a 6 channel audio with both input and output SPDIF connectors.