For the most part the Soyo SY-KT880 Dragon 2 is well laid out. It has a nice pearl-black PCB and color-coded components. Soyo did many things right on this board, but there is room for improvement. 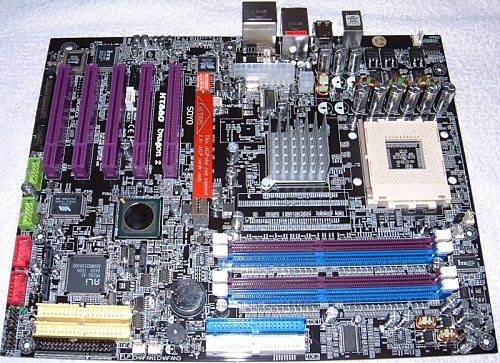 Starting with the socket area, we can see there is ample space to the sides of it and there are four mounting holes for your waterblock or hefty heatsink. But the orientation and capacitors cause some potential problems.

The wall of capacitors that align themselves to the socket will give you problems when installing a heatsink due to the lack of space. There isn’t much of a gap between the caps and the socket which means your heatsink clip will have to squeeze into this space. This makes for a difficult installation time because getting the clip onto the lugs sometimes requires a finger to guide it, but the capacitors will block you from doing that. 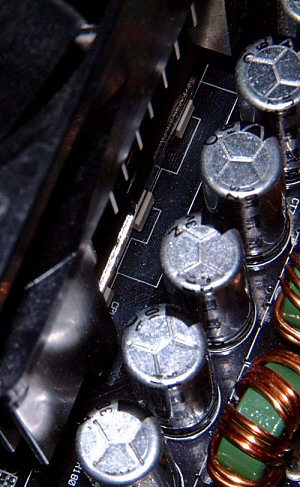 The orientation of the socket is different from all the motherboards I’ve ever used. Most motherboards today align the socket lugs along the top-edge of the board to prevent damage caused by heatsink tool slippage. The Dragon 2 does it differently by placing the lugs the other way, so if your screwdriver slips while installing the heatsink, there’s a chance it will scrape along the PCB towards the DIMMs. 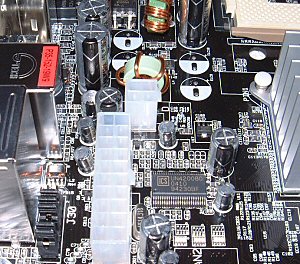 Looking now at the ATX and 12V power connections, their location is far enough from the socket so that the power cables won’t affect CPU airflow too much.

The IDE RAID, SATA, USB, Firewire, and frontpanel connections are all clustered along the bottom edge of the motherboard. This is good placement as it is far enough from the PCI slots so it won’t interfere with access or installation. 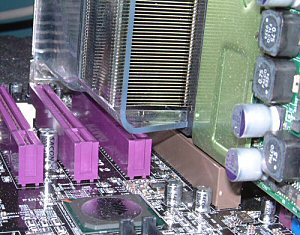 The AGP slot does not have a gap between it and the first PCI slot. So for those of you with larger video coolers, you will likely block off PCI-1 like I did with the GeForce FX5950 Ultra. The RAM clips are not inline with the AGP slot, so longer videocards will likely not have a problem. The Dragon 2 supports AGP Pro for professional video cards.

No serial or parallel ports on this backpanel.

The backpanel connections on the Dragon 2 is very minimal. Instead of placing parallel and serial ports here, Soyo removed them which leaves the backpanel looking bare. The backpanel has 6 audio connections (for 8 channel sound), LAN, 4x USB, and dual PS2 for keyboard and mouse. The bracket is perforated intending for better ventilation near the socket and also to make use of the space left by not having the parallel and serial ports on the back.

Mini optical adapter will be required for SPDIF in/out.

If you’re looking for SPDIF connections for your digital audio, the Line-in and Line-out jacks double for digital in/out. But the catch is you must use a mini plug adapter for your TOSLINK/optical cable. So you will have to buy one if you don’t already own one.

The Dragon 2 has features you would expect, but a few notable differences that set it apart from the rest.

Gone are the days when on-board audio was an unwanted and unused feature. The Soyo SY-KT880 Dragon 2 comes with a CMI9780 audio controller capable of 8 channels (front, center/sub, surround, and rear), line-in, and SPDIF in/out. The software that drives audio hardware is actually very polished and much better designed than I would have expected from an OEM part. XEAR 3D, the name of the software has ‘Virtual Speaker Shifter’ which is a DSP effect that virtually moves the location of your speakers. While it doesn’t replace proper positioning of your speakers, it is a good way of tweaking the sound so you get the best sound image. 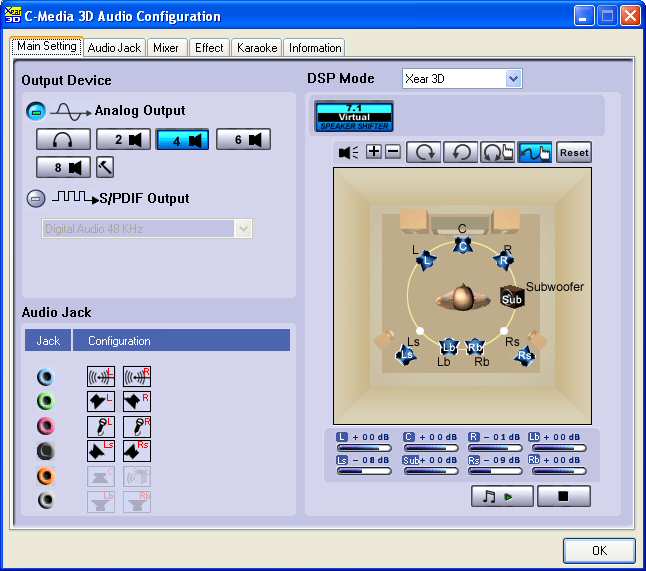 There are a few things I would have liked to have seen with respect to the audio. Instead of using mini optical plugs (though the Line In and Out jacks), standard TOSLINK SPDIF connections would have been preferable, especially since there is already so much room left behind by the lack of parallel and serial ports. There is also no discrete volume controls for the speakers. So if you want to make your front speakers louder and your rear softer, you will have to use your speaker’s controls (if available) or use the XEAR 3D Speaker Shifter to ‘move’ the speakers closer or farther away.

Real-time Dolby Digital encoding (aka. Dolby DICE) is missing the Dragon 2’s CMI9780. DICE is something that may concern consumers if you’re listening to a lot of multichannel analog audio. DICE will convert that analog signal into digital so your exteral digital decoder can then decode it.

The Dragon 2 includes both SATA RAID and IDE RAID which is something of a rarity these days. Most modern boards now support only SATA RAID but many of us still have ‘legacy’ IDE drives that we would like to use. However, the ALi M5281 controller only allows homogenic disk types, so no mixing of serial or parallel drives in RAID mode. 0+1 functionality is only available on IDE3/4 but both SATA and IDE support RAID 0 and RAID 1.

One of the things I forgot to mention at time this review was first published is that because there are both SATA and PATA controllers, you can theoretically have up to 12 drives connected to the same computer. This is a huge bonus for those of you looking to store and serve some serious data.

Fan control is another feature on the Soyo Dragon 2. Unlike Asus’ Q-Fan scheme that automatically throttles only the CPU fan without any user settings, Soyo’s implementation allows users to set the fan output to whatever they want. After playing around with this I found that it’s a bit quirky. First, you can’t control the RPMs of fans connected to the CPU fan headers. Presumably this is a safeguard in case someone accidentally turns them off (this makes Asus’ Q-Fan a better scheme). Secondly, the fans that you can control (the chasis fans), are twitchy. The fan control slider goes from 0 – 127 but my particular fan only operated properly in the 95-127 range, anything lower stopped the fan. But oddly at 0 level, the fan spins slowly, but at something like 34, it stops dead. The slider for these settings annoying to use because the slider is small and there are a large number of positions (128 of them).

Another interesting feature is that the motherboard has a total of six fan headers. This is something I’ve personally never seen before as most boards have three.

Two dual channels on the Dragon 2.

The Dragon 2 supports up to 4 GB DDR400 RAM and has two dual channel DIMMs. To compare to the nForce 2 Ultra400, the NF2 supports 3GB of RAM maximum on a single dual-channel. So as far as memory flexibility goes, the VIA KT880 on the Dragon 2 is a bit better.

There are two USB and two IEE1394 headers on the SY-KT880, but strangely Soyo does not include any bracket to take advantage of these features. Gigabit Ethernet on an embedded VIA 6122 rounds out the features.

Soyo’s BIOS has a token showing of overclocking features compared to other motherboards. 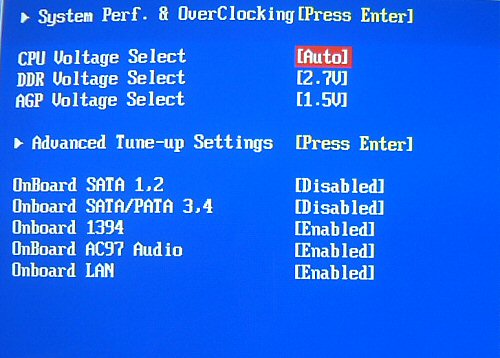 You can adjust the CPU (1.1 – 1.85V), AGP (1.5-1.8V), and DDR voltages (2.6-2.9V) manually. The voltage ranges are modest compared some enthusiast boards and there is no chipset voltage control either. For some of you the BIOS may give you enough features, but for those looking for some extreme overclocking you may feel this is lacking. 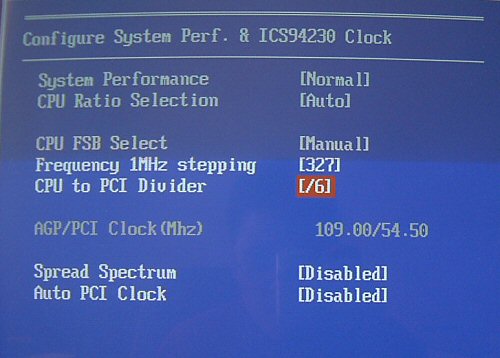 Here in the overclocking configuration, we see that the motherboard is able to go up to an astounding 327MHz on the FSB. But the lack of an AGP lock, active northbridge cooling will limit how far you can push the FSB. This brings us to the next feature, without a lock there is an AGP/PCI clock divider. This gives you some control over how much your AGP/PCI FSB is overclocked with the CPU. There are divisors from 3 to 6 to help in your overclocking quest. 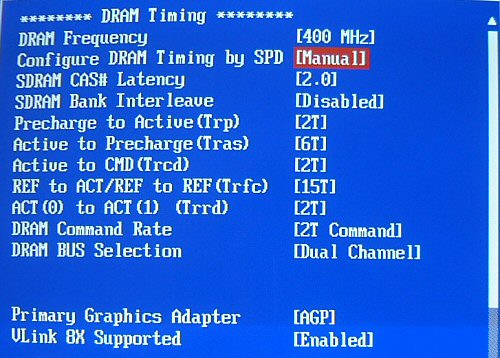 Here is the memory controls that practically every motherboard features these days. 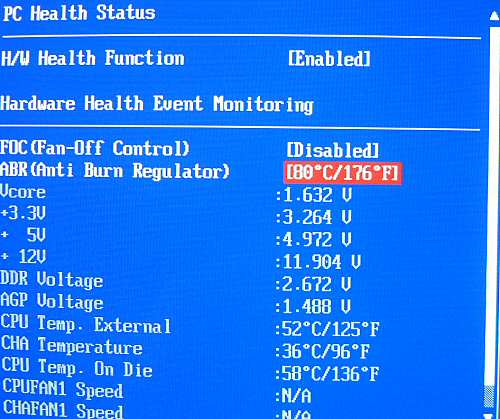 The Soyo Dragon 2 has a unique feature called Anti-Burn Regulator that is enabled through the PC Health screen. This feature when enabled (and jumper properly set) will shutdown your PC when it gets too hot. Though this feature is nothing new to those who have used Motherboard Monitor (MBM) for the past few years, ABR is handy in situations where you can’t run something like MBM like if you are running Linux or some special operating environment. 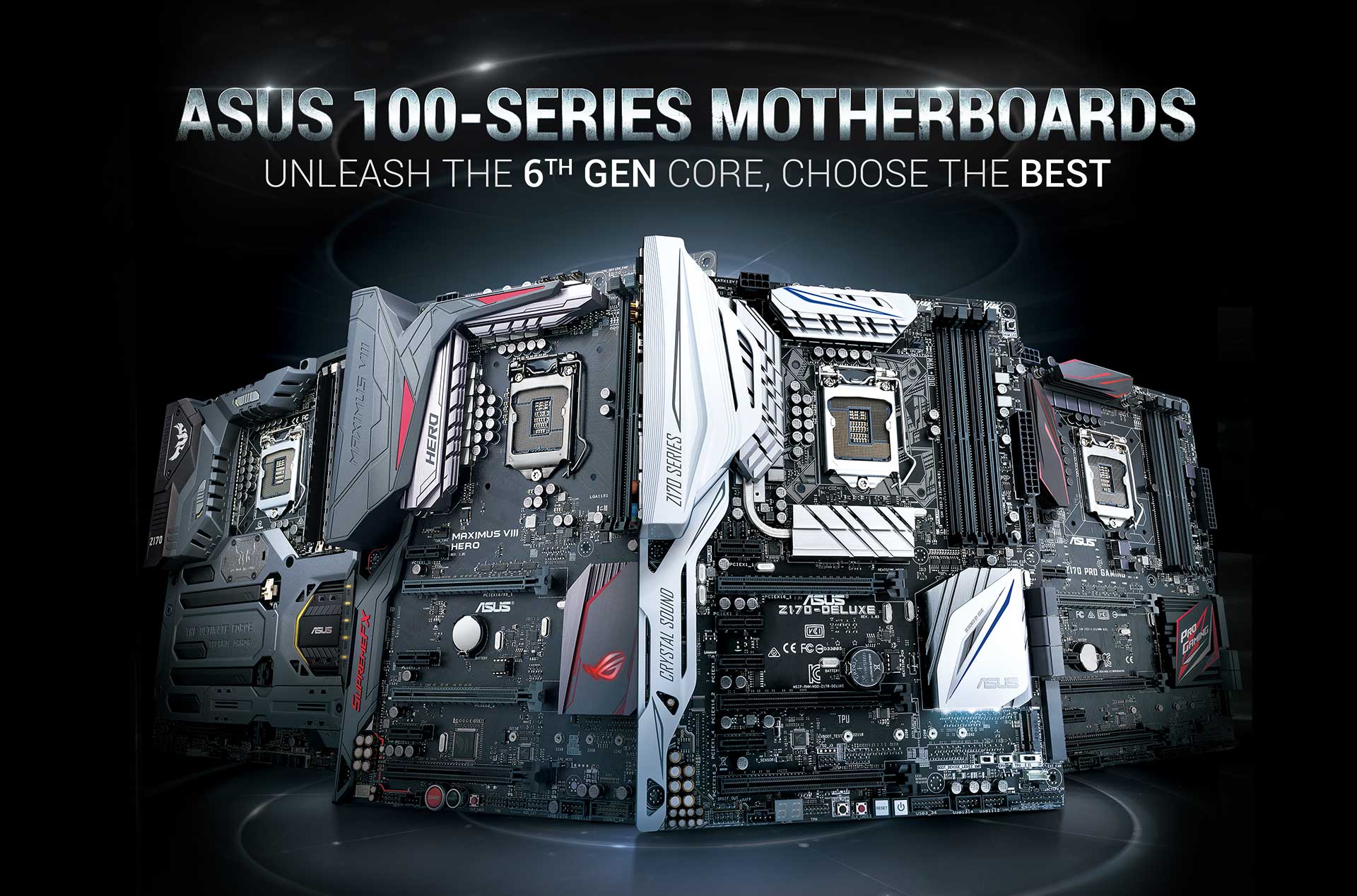