The AA8 DuraMAX motherboard has quite a few interesting and beneficial design choices that have gone into its layout and feature set. 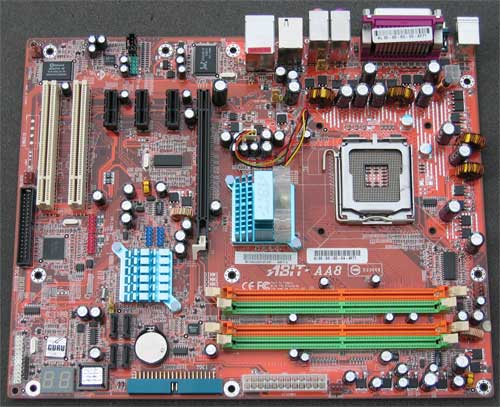 Above is the full motherboard layout in its entirety.  We’ll go over individual spots as usual below. 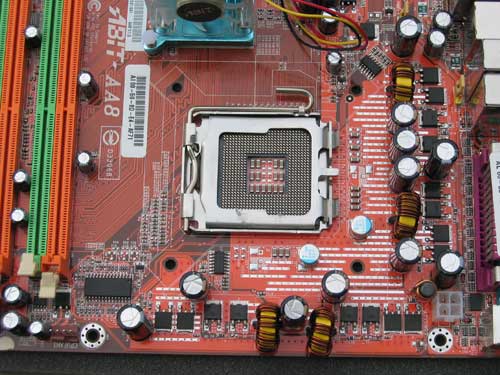 The 775-pin processor socket is given enough room for standard and off-shoot heatsinks to be installed successfully.  Notice the small capacitors to the bottom right of the socket in this image; they are low profile enough to not become a problem for the three heatsinks we installed on the motherboard.  There is enough room on any side of the rentetion clips to install non-standard cooling as well, including water blocks I am guessing, though I haven’t had any retail 775-pin blocks in house yet. 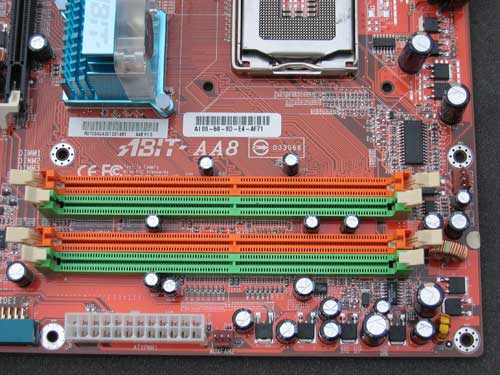 The AA8 DuraMAX supports 4 DIMM slots of DDR2 memory in two channels.  For the Abit board, the colors do not indicate different channels, instead you should install memory in both the orange slots first and then the green slots, should you have that many memory modules.  The theory behind dual channel memory needs to be solidified in my mind, as in some other motherboards, you are required to install memory modules in other fashions.  I think a clearly defined method for memory should be defined and stuck with, and I think the seperation between two DIMMs like Abit has done is probably the best way to do it.

You can see the ATX power connector here at the edge of the PCB where it shouldn’t cause any layout or installation issues unless your PSU power cable is short and it grazes the top of the memory modules. 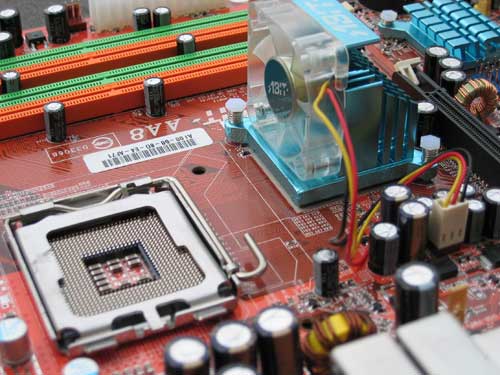 Here is the CPU socket pictured with the north bridge heatsink that Abit has installed.  The unit is pretty beefy and very effective at cooling the north bridge, which is good for overclockers.  However, the one issue I have for it is that it blows the hot air onto the back of the PCI Express graphics card; a unit that needs no help in getting hot! 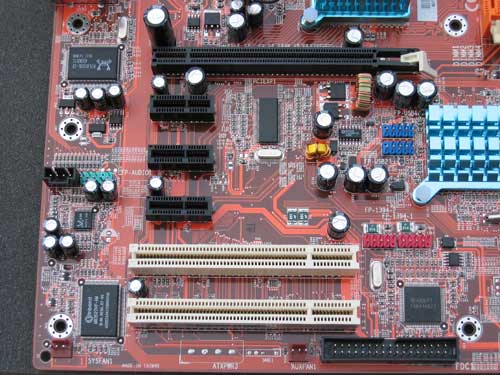 Here are the expansion slots that Abit has provided you with on the AA8 motherboard.  There are two legacy PCI slots as well as three PCIe x1 slots for whenever accessory cards decide to come out for the platform.  I’m not placing any bets on when that is going to be though.  And of course there is the x16 PCIe slot for your primary graphics card. 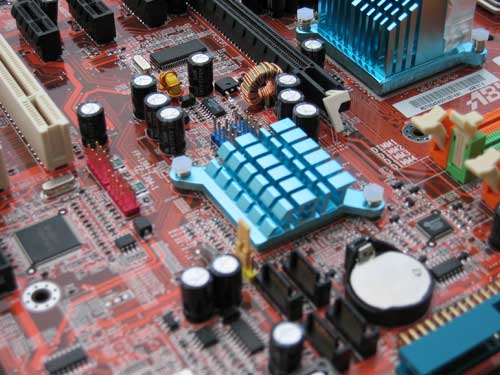 The ICH6R south bridge on the AA8 is covered with a smaller heatsink that matches, in color and style, the north bridge heatsink.  It doesn’t do a whole lot of cooling but it gets the job done and keeps the motherboard pleasing to the eye. 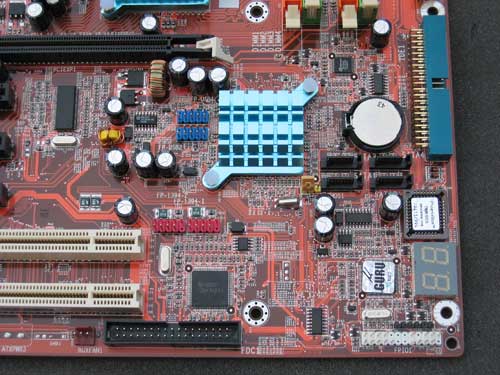 And here we see the entire storage array on the AA8 DuraMAX motherboard.  Abit has included four Serial ATA channels provided by the ICH6R south bridge from Intel as well as a single IDE channel.  This is probably my biggest gripe about the new chipset as far as options go, as I am not quite ready to see IDE connectors go away on motherboards, for both my personal system as well as these test systems.  We use IDE drives for various backup and installation purposes here in the lab and only having one IDE channel makes the process much more difficult.  An improvement here on Abit’s part for a full-featured board would be to install an IDE controller chip for additional IDE channels.

Finally, here are the external connectors on the AA8.  There are four USB 2.0 connectors, a Gigabit LAN connection and all the connections needed to support the new Intel 7.1 channel high definition audio.  Even input and output optical connectors are included.