In taking screenshots on Shadow Ops, I was forced to use the “Print Screen, Alt-Tab, Paste into Paint” method.  And because the game doesn’t have the ability to pause the game or to have individual save points, the screenshots are all going to be slightly different from each other in terms of their orientation and placement of the “bad guy” and so on.  I have done my best to eliminate any potential issues regarding this, however.

I chose to use the first level of the game as it is in the day light which provides us with a good view of any texture or detail changes that take affect in the game from setting to setting. 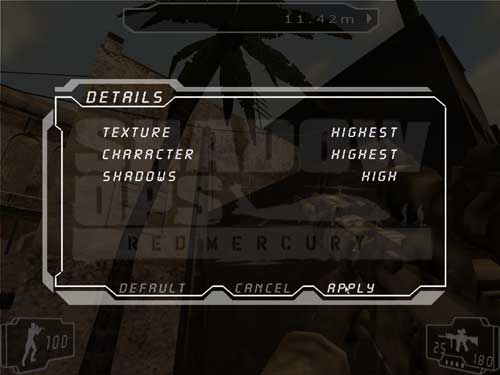 The Game Detail menu in the game looks like this, with texture and character settings having a max level of “highest” while the shadow setting is maxed out at “high.”  I took screenshots with all the settings at LOWEST, NORMAL and HIGHEST (except for shadows at HIGH).

Both 32-bit and 64-bit show identical blurring of textures and lack of shadows here in both the foreground and the background of the screenshot.  However, some things have changed that we’ll notice as far as objects that appear on the screen.  In the 32-bit screenshot, there is no stone border around the tree and no small wisps of weeds next to it, though in the 64-bit version those items do exist.  Also in the background, over the back door, there is an awning over the door that doesn’t exist in the 32-bit version.

You can see that Normal settings are a big step up from Lowest in image quality, by paying attention to the shadows under the characters and gun detail.  We can also see in these screenshots another item that shows up only in the 64-bit version of the game, the window behind the tree towards the top of the screen.

Finally, we have our HIGHEST settings, where the details really start to jump out at you.  Both the 32-bit and 64-bit versions are showing similar changes in detail levels, however.  On our next page, we take a closer look at two detail points of these screenshots.