NVIDIA is ready now with their PCI Express AMD chipset — and thus the age of PCIe was upon us. Oh, and SLI too. 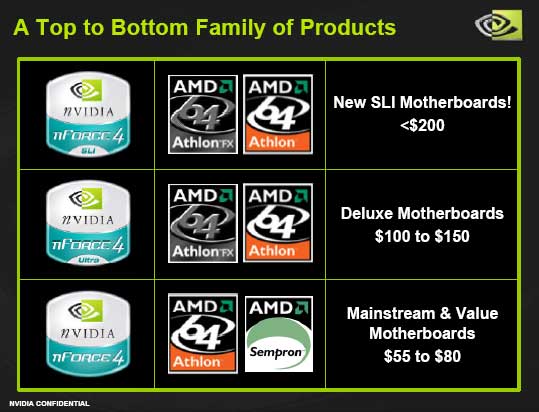 Well today, just nine hours after the official release of the Athlon 64 FX-55 processor, NVIDIA’s nForce4 chipset is being announced, and we can show what it has to offer.

First up is the networking funtionality of the nForce4 chipset.  This is an area that NVIDIA has been concerned with since the release of their nForce3 chispet for the Athlon 64 line of processors.  First, there was the addition of a highly integrated and enhanced Gigabit network device that was included on the chipset.  At the time, before PCI Express was around, NVIDIA’s implementation of this NIC enabled a much higher bandwidth alotment than standard PCI Gigabit solutions.  Along with that, NVIDIA tagged some integrated firewall software that was coupled with their Forceware driver solution.  It included minor hardware enhancements that improved performance and lowered CPU utilization over most retail firewalls.  With the nForce4, NVIDIA added to both of these features and then some.

NVIDIA’s firewall software has taken on the name “ActiveArmor” to signify its use to your PC.  Here is a break down (all slides from NVIDIA) of what it offers you: 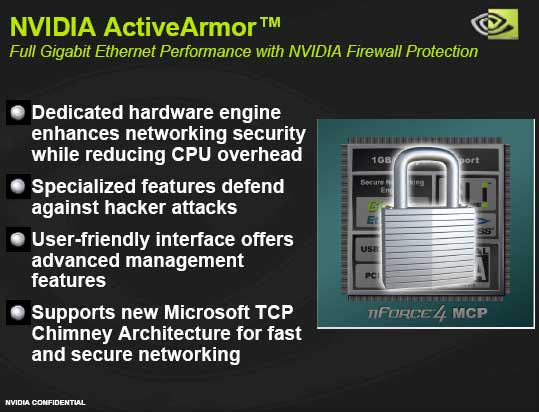 The new nForce4 architecture has much more actual hardware behind the firewall than the nF3 did and you can see those improvements in the CPU utilization.  I took part in a demo of this where the nForce4 machine was being slammed with bandwidth (from another nF4, ironically) that needed to be checked by the firewall and thus took up a significant amount of processor time.   We then played a game while this was occuring, some basic MS-published 3D game, and the frame rates took a dive when using the Norton firewall software.  On the other hand, the NVIDIA firewall software showed only a small decrease in playability. 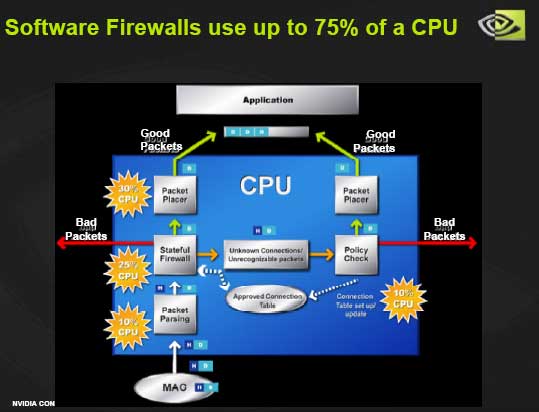 Here is a slide that shows what I was trying to describe up above. 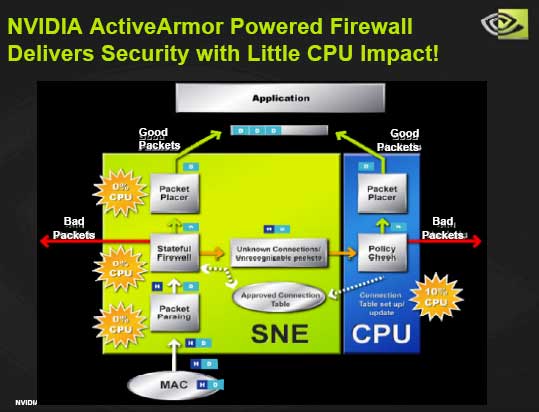 And finally the nForce4’s implementation of their software firewall with hardware enhancements.

The interface for this software is the same as we saw in the nForce3’s software — web based and easy to navigate.  You can take a look at that interface from our nForce3 review, if you’d like.

Another new feature in the firewall software from NVIDIA is called the Intelligent Application Manager. 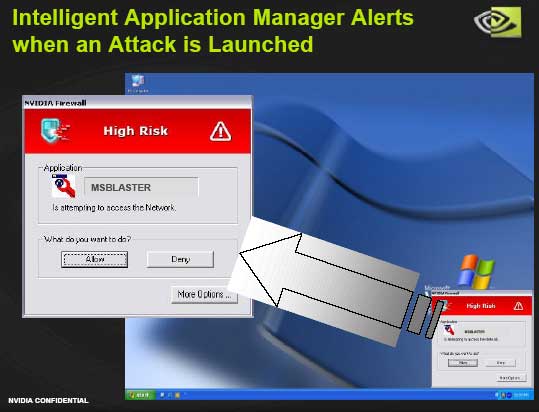 This option basically makes application-by-application access to networking very easy to configure.  If you are using a new application that happens to try to access the internet, you will get a pop up like the one shown above, verifying that you want to give it access to that particular port, or what have you.  They also assured me that the application is intelligent enough to spot trouble when applications rename themselves to do their dirty deeds, and by using a hash table, ActiveArmor avoids that issue.