Thoughts on the nForce4 Ultra

The performance of the NVIDIA nForce4 Ultra chipset is right on par with where we expected it to be.  Our reference board performed at the same levels, maybe just a tad faster, than the early VIA K8T890 chipset reference board we tested a few weeks ago.  As is now common place with the Athlon 64 architecture, the performance changes from one chipset to the next are not very dramatic as the on-chip memory controller has too much of the system performance in hand.  Of course, this is a good thing for the AMD vs Intel battle but bad for those used to the VIA vs NVIDIA vs SiS vs ALi battles of performance.

The new feature set of the nForce4 boards is pretty impressive.  The list is even longer than it was on the NF3 Ultra boards, adding a new and improved software and hardware firewall with a lot of networking protection that users can get for free with their NF4 motherboard and Forceware download.  The addition of Native Command Queueing to the SATA controller puts the NVIDIA storage controller almost on par with that of the ICH6 series from Intel; the one exception is the Matrix RAID feature that I like so much.  Though there is no SoundStorm on the NF4 chipset like some of you may have hoped, the additions that NVIDIA did make should do you well.

The nTune software is coming along quite nicely, and is as close to a polished product as we can expect.  The key will be to see if NVIDIA can convince the motherboard manufacturers to include the necessary modifications in their own BIOS to support this application fully.  The overclocking and tuning and informational benefits of nTune are pretty substantial, especially to novice users, and the motherboards that have that functionality will surely see a benefit by including that feature.

One question that still remains to be answered is the chipset availability.  When we first looked at the NF3 Ultra chipset, we were told that retail availability was going to be widespread and fast, but that was not the case.  Very few NF3 Ultra boards are for sale still today, with more manufacturers really pushing their NF3 250 stock out the door instead.  Whether or not this is a case of the manufacturers getting stuck with out dated inventory on the older NF3 chipsets after the Ultra’s launch is still up in the air, but I am sure it had something to do with it.  But since this chipset is for a new graphics platform, there is no old inventory.

Oh yeah, and I happened to run across this photo of an MSI SLI-ready motherboard in my review packet: 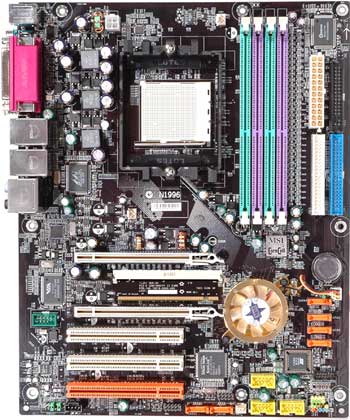 You can see the two PCIe slots as well as the “flip switch” that is used to toggle between single and dual card mode.  We’ll have ours by the middle of November I am told.

Thoughts on PCI Express for AMD

Now that we have available chipsets from both major vendors that support PCI Express for the AMD processors, what does this mean for the graphics market.  We will surely start to see an increase in demand for PCIe graphics cards.  But in that lies a problem — PCIe card availability is still pretty darn low.  I am not talking about X300 or 5750s — I am talking about cards the buyers want: 6800s and X800s.  Heck even the 6600s and X700s.  Chances are the graphics card vendors aren’t making them because there is a low demand with only the high end Intel systems supporting PCIe.  By November, this should all change.  AMD’s 939-pin processors are getting cheaper and cheaper and the upgrade cycle coinciding with the holiday is right around the corner.

Either way, the demand is about to get higher, so NVIDIA and ATI will need to step it up or we’ll have $3000 systems with X300s and 57050s in them for Christmas.

While I am sure you are all still salivating for the nForce4 SLI benchmarks and tests, you’re going to have to wait a couple more weeks for that.  But as it gets closer, I can feel the buzz growing into a loud hum, as the anticipation for SLI in your own system spreads wider.

The NVIDIA nForce4 looks to be a promising chipset for the AMD market with a list of great features that surpasses any of the competition.  Performance is good as well, but we’ll wait for the retail boards to hit our labs before me make our final judgement call.