With the nForce4 launch, NVIDIA has several improvements on their SATA and RAID implementations.  First, the NVRAID software, though it includes the past look and feel, adds a lot to the functionality. 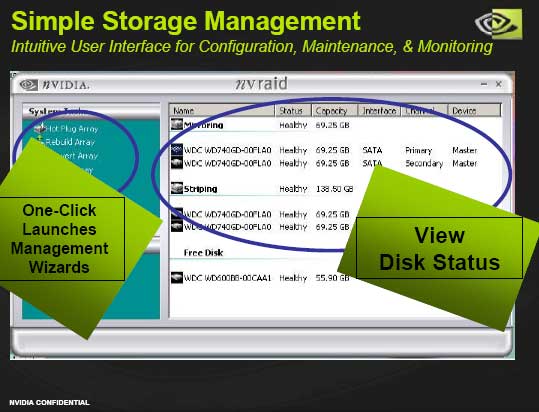 Now you can launch easy-to-use management wizards to help you rebuild an array, set up a new one or destory a current one.  You can also view the current active disk status on screen. 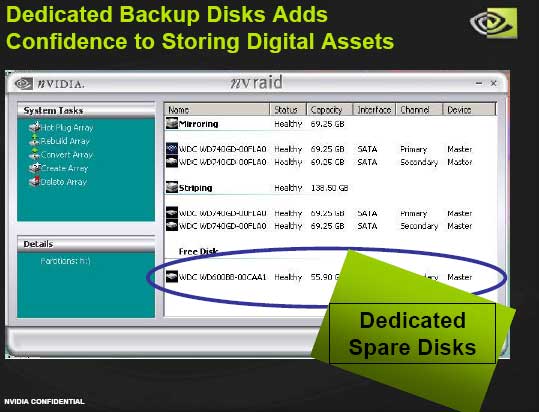 This new RAID software includes support for dedicated spare disks.  These are hard drives that under normal daily use will sit idle and not be active.  It at first sounds like a waste of money, until you learn that if a current RAID drive dies while in active duty, the reserve drive will automatically take its place and begin the mirroring job or what ever function the array is in. 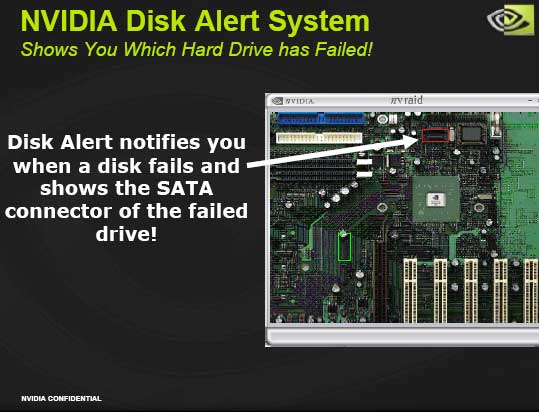 The “Disk Alert System” is supposed to be able to point you to the dead hard drive in your computer case without the need to guess and check by highlighting the dead drives SATA connector super-imposed on an image of the motherboard.  While a good idea in theory, I doubt it will work in practice as this would mean every motherboard manufactuer would have to configure this software specifically for their boards, as SATA connectors move around quite a bit during layout design. 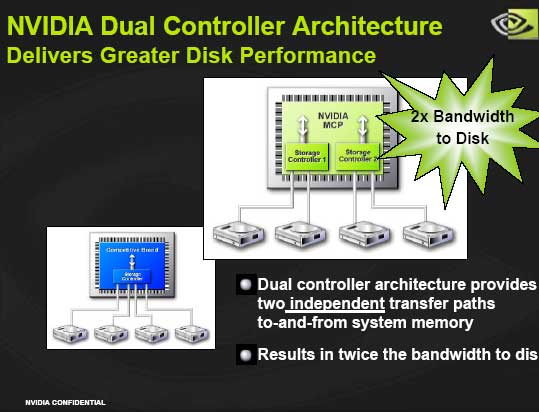 NVIDIA is also the only chipset manufacturer with SATA on-board that has expanded the SATA channels to four but still given each two channels their own transfer paths.  This means that channels 0 and 1 share a data path that is seperate from the path that channels 2 and 3 use.  When utilizing 3 or 4 disks this can mean additional bandwidth benefits to your storage solutions., though the 2x bandwidth number that NVIDIA is claiming in the slide above is a theortical max.

It should also be noted that like the Intel ICH6 south bridge, the new nForce4 chipset adds support NCQ (native command queueing) on hard drives supporting this feature.

NVIDIA and VIA in talks of acquisition