By far the most anticipated feature of this new chipset came with the announcement of the NVIDIA SLI technology.  This new implementation of dual graphics cards requires a special motherboard with two PCI Express x16 slots (though each of them will not have 16 physical lanes of PCIe on them) and can be used with the 6600GT,  and 6800 series of graphics cards. 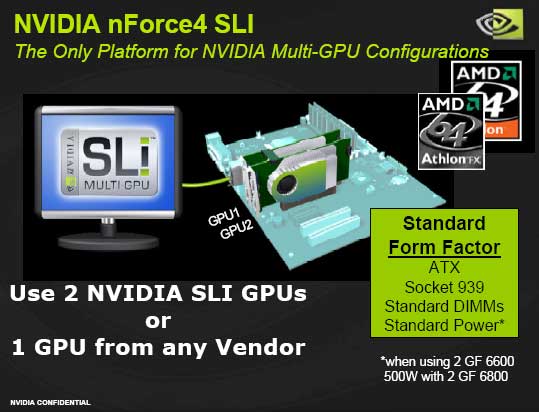 This slide gives a brief overview of the technology as well as teaches us something new — if you are using two 6600GT graphics cards in SLI mode, you will still only need a standard PSU but you’ll need at least a 500W bad boy to run two 6800 cards.

There have been questions on how NVIDIA was going to implement their support for dual graphics cards, and we now have the answers.  There is a small “jumper card” that sits between the two PCIe slots that is removeable and can be flipped between two sides.  When it sits in “single mode”, the x16 PCIe slot has a full 16 lanes of PCIe support going to it.  When it sits in “dual mode”, the 16 lanes are split evenly, meaning two x8 PCIe channels are going to each of the x16 slots.  NVIDIA claims that through all their testing, the two x8 PCIe configuration was the best possible to alleviate any latency issues on the SLI technology.

We were supplied with a flash animation of how this works exactly, so I have uploaded it and linked here for you all to see as well.

Now, unfortunately, we don’t have an SLI system yet in our hands for testing — the official launch date of the nForce4 SLI chipset is still a bit away — NVIDIA didn’t want to over shadow the release of the rest of their chipset family.  What we can show you are benchmark numbers provided to us by NVIDIA.  The first set come from an Athlon 64 FX-53 setup and the second set are from the Athlon 64 FX-55 configuration.  I was there during the testing of these FX-53 numbers, so I can vouch for them, but the FX-55 numbers were provided for us last night.

There is an issue that I will discuss briefly in this article, but save for a later date since it doesn’t directly affect the nForce4 Ultra chipset as we see it today.

It has become known to me that the only chipsets that will work with the NVIDIA SLI technology are the Intel Tumwater chipset and the nForce4 SLI.  Now, you surely saw that in our VIA K8T890 chipset preview, we saw support for two PCI Express graphics cards slots.   Howver, the NVIDIA drivers will actually disable the ability for SLI if it does not detect one of the approved chipsets, which right now is at two.  NVIDIA says they have a certification program in place to keep technical issues at bay when dealing with such a highly publicized technology that can affect their name brand so closely — and this makes a lot of sense, and will keep end user problems down to a minimum.  However, if this system was put in place without actively cooperating with other chipset vendors (not just VIA, but SiS and ATI as well) then we are all going to be hurt by this.  We’ll see higher prices on the few boards that do support SLI because of the lesser amounts of competition and I’m sure we’ll hear conspiracy theories on why NVIDIA would go about making their chipset the only desktop chipset to support SLI.

Putting that aside, though I think a certification for this kind of technology is a great idea for end users security, I call upon all sides of this debate to suck it up and do what is needed to get the technology into the hands of EVERYONE.