With the introduction of the SLI motherboards comes a new way of looking at a motherboard design and layout.  The Asus board is the first SLI board we get to play around with, so it will be going under the microscope more than usual. Let’s take in all that is new and different about the layouts of the NF4 SLI products. 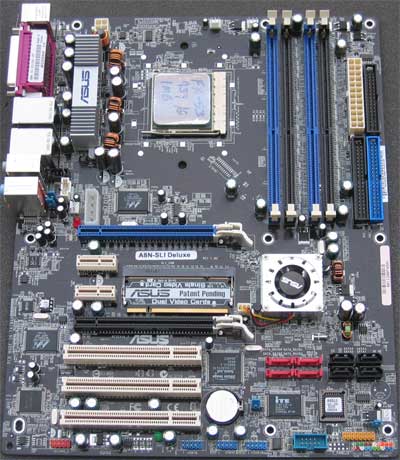 At first glance, the layout of the A8N-SLI motherboard doesn’t appear that different than most other boards we have seen before.  Closer investigation reveals quite a few differences starting with the addition of PCI Express slots on a retail AMD motherboard, which is a first for us.  There are two x16 PCIe slots that allow you to connect two x16 cards to the motheboard, but don’t actually have x16 lanes of PCIe going to to them.  Your choices are limited to having a x16 connection and a x1 connection (where the secondary x16 slot is able to utilize only a single lane of PCI Express) or having two x8 connections.  The former allows you to have a single graphcs card and up to three x1 PCIe devices on the system while the latter lets you use two GPUs and a single x1 PCIe devies (maybe, more on that later). 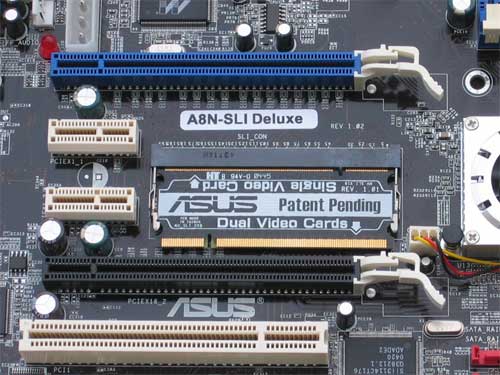 If you have seen photos of other SLI motherboards, you may have noticed that the Asus A8N-SLI has a wider gap between the primary and secondary PCIe slots than the other boards.  Asus has done this as a way to provide better cooling to GPUs that power an SLI system – the wider gap allows more air to move between the cards and thus do a better job of cooling than if the cards are much closer together.  That being said, I am a bit let down that Asus chose to put both x1 PCIe slots in between the x16 slots, as this means if you install another PCIe device, you are basically getting rid of any additional room and cooling the design provided.

The alternative would have been to either place nothing in between the x16 slots or to switch the positions of a legacy PCI slot and one of the PCIe slots, but then our expansion slots are limited there as well.  This really becomes noticeable when you have two 6800 Ultras on the board and their dual-slot coolers take up quite a bit of real estate. 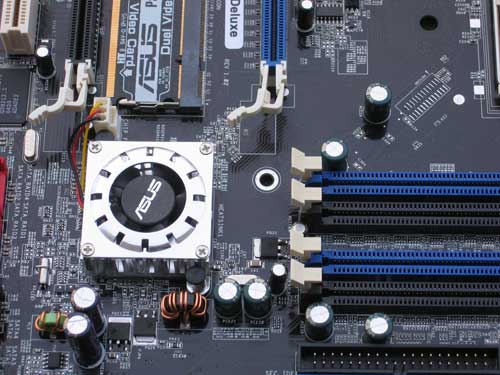 Between the two x16 PCIe slots you’ll find the heatsink and fan that work together to cool the rather hot NVIDIA nForce4 SLI chipset.  It should be noted that this chipset does get pretty hot and it can have an affect on your system stability if you don’t have proper cooling in your case.  The chipset would benefit from a bigger heatsink and fan, but because of the design of the A8N-SLI board, where the chipset actually goes under one of the graphics cards, Asus was forced to use a low profile heatsink.

You can also see from this shot that the DIMM module retention clips come close enough to the primary PCIe slot to come into play with video card installations.  In fact, I ran into this issue when I couldn’t figure out why my ATI card wasn’t seating correctly only to find that my vision was blocked of seeing one of the DIMM clips in the down position, holding the card up.  Simply closing the DIMM clip and then installing the card was simple enough, but its something to keep in mind — always install memory before installing the video card. 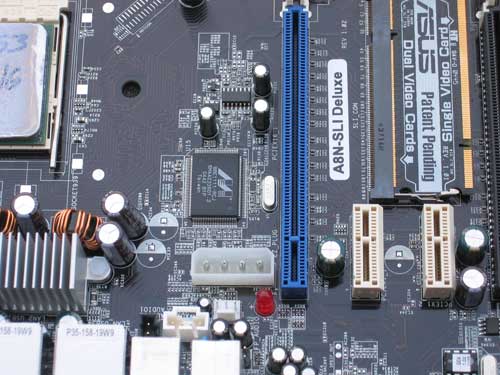 You may also notice the addition of this 4-pin molex connector on the motherboard by the primary PCIe slot.  This is what Asus is dubbing “EZ Plug” that adds an additional power rail to the GPUs when operating in SLI mode.  The red light by the plug illuminates when you have two GPUs in stalled and do not have the power connector plugged in.  My testing showed that SLI was working fine with or without this “EZ Plug” but those with lesser PSUs might find the situation different. 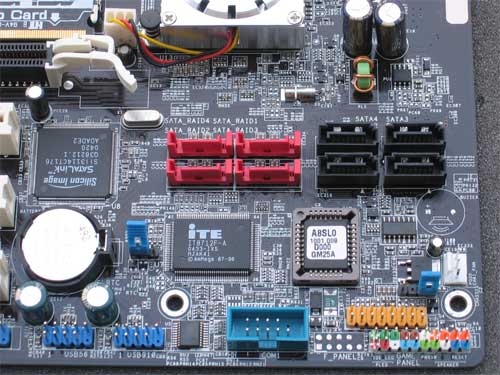 Features has always been one of Asus’ strong points — and the A8N-SLI Deluxe doesn’t let us down.  Coupling the NVIDIA-based SATA channels with an additional Silicon Image 3114CT chip Asus has given the user a total of 8 SATA channels that all support RAID.  The NVIDIA connectors use the new SATA connection sytle that are more stable than the older style, which for some reason Asus continued to use on the Silicon Image channels.  Here at the bottom of the board we also have the connections for the serial port and headers for the additional Firewire and USB 2.0 connections.

Here are the external I/O connections on the board — quite a good showing.  You have four USB 2.0 ports and a Firewire port for pretty much all the data connections you might need.  If you do need more, Asus provided some back panels too, so don’t worry.  For audio there is an optical and SPDIF output as well as six connections for speakers that can be software modified to do input or output.  The audio setup is powered by a Realtek 8-channel codec, which is decent, but some will still want the external sound card solutions.