City of Hereos has quickly become one of my favorite games, drawing me away from work for hours at a time…and it also happens to be quite demanding for an MMORPG game so I decided to use it as a benchmark and justify that monthly charge to my credit card.

All the visual options were turned up as high as they could go (HIGH and 200%). 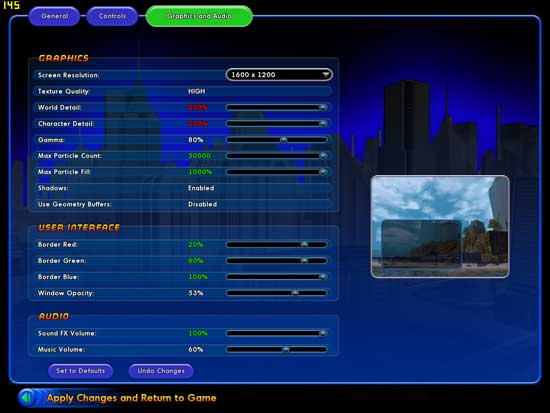 Getting repeatable results in an online game can be tricky, but I think I’ve solved it by doing a course run through on the tutorial map with a beginning character.  There is rarely anyone on this map so other players won’t affect my performance and as my character doesn’t change and the missions can be reset by simply logging out, this is the perfect area to get some benchmark numbers.

All three cards perform about the same with AA and AF off at 1024×768 and even with the 4xAA and 8xAF enabled.

At 1280 with no AA/AF, all three cards are playable and when we turn on the extra detail, the Asus V9999 Ultra shows a bit more muscle.  Though the average FPS for both the Asus and the ATI card are similar, the min FPS on the Asus card is 5 frames higher.  Not a big difference but may show a sign of things to come.

At the highest resolution and detail settings, both the Asus V9999 Ultra and the X800 XT PE card show similar performance, and in fact, the 6600GT card isn’t too far behind, though playability is an issue there.