The trainstation map “d1_trainstation_02” is one of the most impressive visually in the game.  The architectural detail on some of the buildings is impressive to see out of real-time rendering. 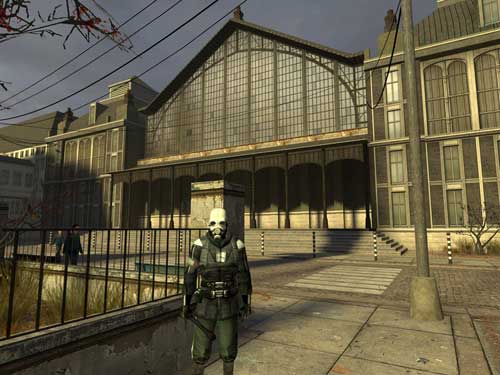 In the demo, I start inside the trainstation with a few guards.  After obliging one and picking up a can and throwing it away (what an ass) I go outside and wander around the square for a bit looking up at the buildings, coming in close contact with the people nearby, etc.

Though this demo is somewhat CPU bound, the NVIDIA hardware has an interesting and repeatable performance advantage in the early resolutions.

NVIDIA’s lead continues in the 0x/0x but falls away in the 4x/8x results to an equal performance from both sides.

At this resolution, an interesting thing occurs.  At the 0x/0x settings, the NVIDIA 6800 Ultra has a 7% advantage on the X800 XT.  In the 4x/8x results, we see the advantage turn to the X800 XT by 13% or so.  The advantage seems to be coming from the indoors section for NVIDIA while ATI has the outdoor areas performing better.