For a show that wasn’t timed with the release of any new chipsets or platforms, this year’s CES show had a surprising amount of interesting motherboards on display.  In no particular order, we’ll go through the various motherboard vendors that we met with.

DFI was not in the convention center, and instead chose to show its new products in a suite away from the hustle of the show floor. 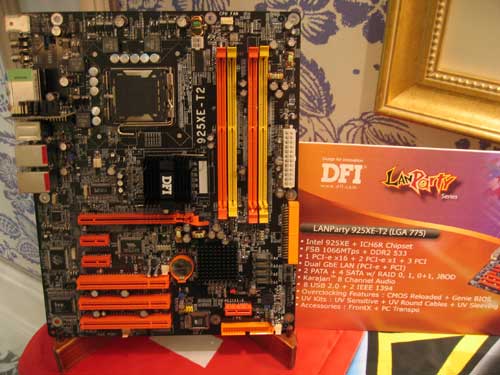 First up we have the LanParty branded 925XE board that features dual Gigabit LAN (one on the PCIe bus and the other on the PCI bus) and the same UV slots and cables that DFI has become known for.  Also on this board, as well as all the upcoming motherboards we saw there, DFI is including a feature called ‘Karajan 8 Channel Audio’ that is a removable sound ‘card’ that attaches at the top of the motherboard and includes the external sound connectors. 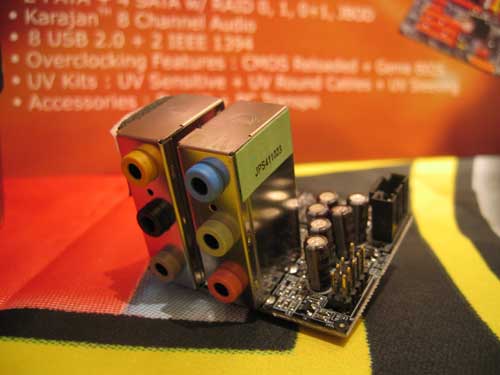 This solution from DFI is supposed to offer clear sound quality as it removes much of the interference from the motherboard signals that transmit sound to the connectors on traditional boards.  Also, I am excited about the possibility of DFI offering upgrades to the audio solution that could simply be swapped within the Karajan connectors. 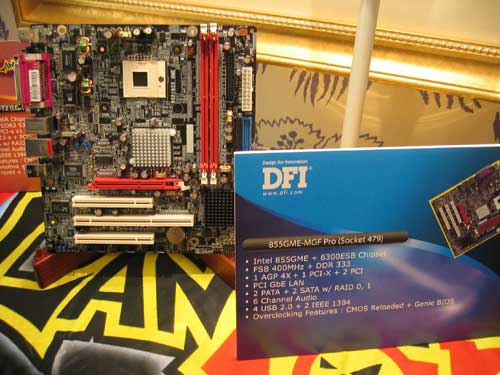 The other Intel offering that DFI had on display was their second revision of the 855-based Dothan processor motherboard.  You may remember DFI’s first offering of a Dothan motherboard was the first retail motherboard available for the desktop on Intel’s mobile processors.  Surprisingly, Intel is actually very excited about this solution from DFI, even though the numbers are very impressive and beating out the much more expensive Pentium 4 line.  Indeed, the Dothan processors are a glimpse at what the future Intel architecture holds for the desktop platform anyway, and this Rev 2 board from DFI offers new features such as expanded overclocking and the four mounting holes for water cooling.

DFI has also been raising eyebrows with their launch into the nForce4 SLI front.  They have two separate products that they plan to bring to the market that both support dual graphics cards. 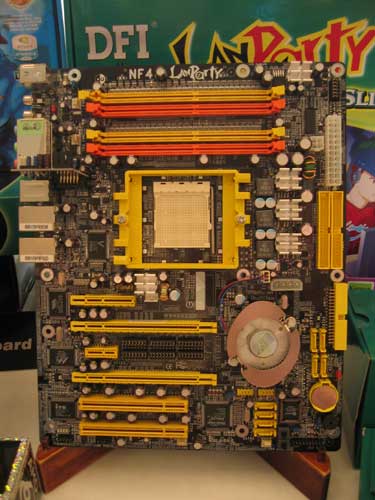 This board is the full-on nForce4 SLI chipset motherboard that supports both a single GPU running on x16 lanes of PCI Express or two cards each on x8 lanes of PCI Express.  You will notice that the utility used to switch between single and dual card mode is much different than that of the Asus, Gigabyte or MSI motherboards we have seen.  Instead of a riser card, DFI has gone with a large array of jumpers that have to be switched to make the change over.  They have included a BIOS removal tool that helps with the jumpers, but it’s still kind of a hassle to do; it definitely isn’t a fast process. 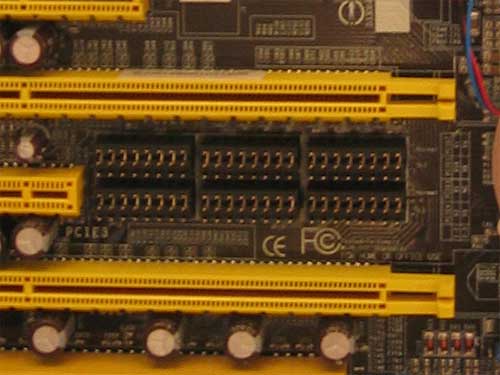 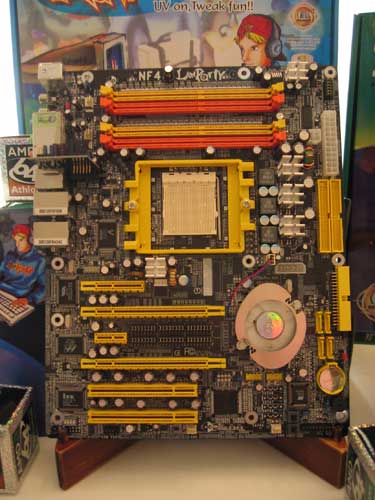 The two boards look nearly identical, with the NF4 Ultra board lacking the additional SATA controller and a few other minor things.  While in single card mode, this board runs the first x16 connector at full x16 PCIe lanes, while in dual card mode, both the GPU slots are actually running at x2 lanes of PCI Express.  While DFI’s reps are saying this does cause a very slight performance degradation of around 5%, I talked to a few graphics cards vendors that don’t see that as the case.  Though none of them have tested the board, they think that a 15% difference is much more likely.  As soon as I get one, you’ll know for sure.