MSI had a large showcase on the convention floor that was mostly used to display their CE based devices such as their SFF and audio systems.  But they did have a few motherboards there as well. 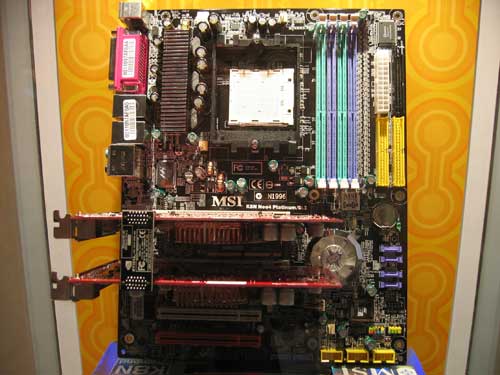 No vendor’s booth would be complete without their SLI solution on display, so here is MSI’s.  Their display didn’t offer the best lighting for image taking as the GPUs blocked all the light from the bottom of the board, but you can see the majority of it.  There are some interesting features that came out from our look this time however. 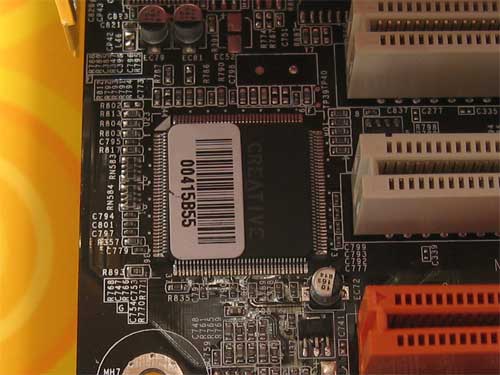 First, if you look closely at the on-board audio on this motherboard, you’ll see that MSI has gone with a Creative Labs Sound Blaster Live! audio solution over any of the other competing products.  The Live!-based chip offers full 24-bit audio quality.  In my eyes, this gives MSI’s motherboard a huge advantage over the Asus and Gigabyte boards right off the bat, having not compared their performance or other features yet.

In addition, though I couldn’t get a clear shot of the chip, MSI has included a Silicon Image 3132 chip that offers two channels of SATA2 support that runs off the PCI Express bus, not the PCI bus.  MSI claims that this can give the users as much as a 20% increase in performance on storage.  And without the additional storage chip on the PCI bus, the sound quality on the PCI-based Creative audio chip should be improved as well.

MSI also told me about their plans for an nForce4 Ultra motherboard that would feature standard on-board audio, not the Creative chip, and would also leave the SATA2 Silicon Image chip off of it as well. 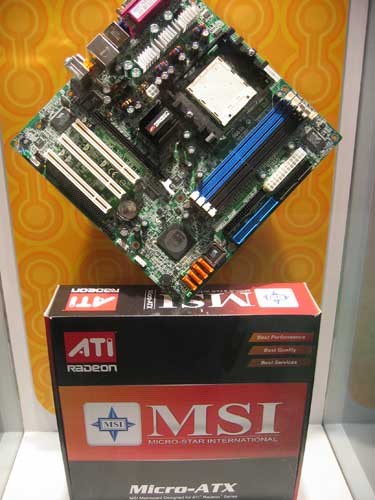 Here we have a shot of MSI’s Radeon XPRESS 200 chipset motherboard that is aimed at the system builders and OEMs, not at the retail market place.  MSI is saying that they are using the newest, and fixed, SB400 chip from ATI, so they won’t have the USB and storage issues that were found in the reference boards sent out to the press.  MSI is still on the fence about whether they are going to offer a board based around ATI’s AMD chipset to the high-end consumers.

Finally, we learned from MSI that they have scraped their VIA-based K8T890 motherboard projects completely due to the success of the nForce4 platform and that they were having problems getting chips.  While this is very bad news for VIA, MSI did say they would rethink the projects once the new Pro version of the chipset was ready.

Albatron had a booth at the show as well and had one board that stuck out among the rest. 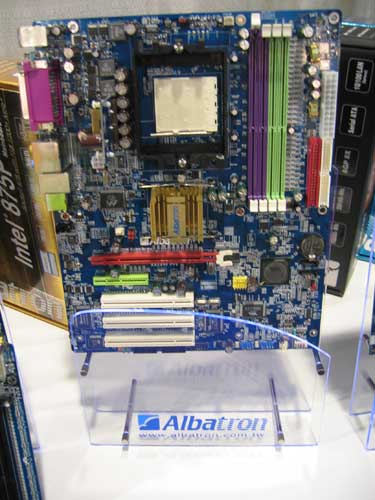 The above motherboard claimed to use the K8T890 Pro chipset from VIA, a product that until now hasn’t been seen.  It also had the VT8237R south bridge that is a slight update to the chip.  Albatron also claimed to have samples of this board ready immediately, and one is already on its way to me today. I’ll have more information for you when it arrives.