Basing our decision on the board’s performance solely around how it does without a multiple-GPU SLI setup, the Gigabyte K8NXP-SLI is the fastest SLI-ready motherboard we have tested here at PC Perspective.  The results from the gaming tests to the system and application tests showed it had an edge over the competition in nearly all the benchmarks.  In the older Quake III and UT2003 benchmarks, we saw a 3% gap in some cases and even in Doom 3 we saw a consistent 2% window.  Of course, that alone isn’t anything to write home about, but it does show that Gigabyte took their time and designed the K8NXP-SLI motherboard very well.  The synthetic tests showed that the memory controller on the chip performed better on the Gigabyte board than on the Asus board as well.

It’s hard to not see the K8NXP-SLI motherboard as one of the better boards in terms of feature support as well.  Besides offering support for the new NVIDIA SLI technology, the motherboard also offers a barrage of storage options including eight SATA controllers (four of which support SATA II) as well as two channels of IDE support for legacy hard drives and optical medium.  Along with all that storage comes support for varying kinds of RAID options. 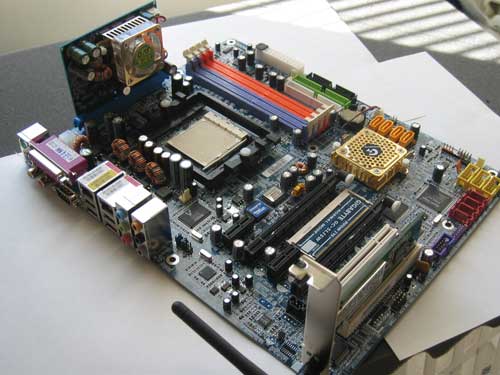 Gigabyte included not one, but two, Gigabit network connections, as well as a free PCI wireless card that supports 802.11b/g networks.  8-channel audio is included as well as headers to take advantage of all the supplied USB and Firewire ports on the motherboard.  Gigabyte has a very complete offering for the user in this motherboard.

Since the initial release of the SLI motherboards on the market, the prices on the boards have come down quite a bit.  The Asus A8N-SLI was first priced over $300 and now can be found for under $200 in our pricing engine.  The same can be said for the new Gigabyte K8NXP-SLI mainboard — pricing starts for it at just under $200; though it’s not found at quite as many resellers as the Asus board yet.  I expect that to level out soon though.  As far as more price drops, I wouldn’t look to find it much cheaper than it is now for at least a few more months.

Being that SLI is the main selling point of this board over their own NF4 Ultra motherboard, its important to note what you get with SLI technology — increased gaming performance.  For a full look at what performance benefits SLI offers, please read our article on the subject, as it exceeds the space of this review.

Also keep in mind, before you buy ANY SLI motherboard, try and find some SLI-ready graphics cards too, if that is your intent.  Unless you are looking for 6600GTs, you may find your search to be in vain for a bit longer.

The only issues I have with this motherboard were previously discussed in the review.  First, the seperation between the two x16 PCI Express slots is less than we saw on the Asus A8N-SLI motherboard.  The benefit that Gigabyte sees that Asus did not, was that Gigabyte users will have a usable x1 PCIe slot even when using dual GPUs in SLI mode; Asus users lose all their single PCI Express slots with two GPUs.  Heat may also become an issue with two GPUs so close together, especially in an enclosed case with minimal air flow.  Be sure to get some quality fans in your case if you are looking at this board.

The other thing we noted was the tight spacing around the DIMM slots.  The slots caused our PRO modules from Corsair to bow slightly due to the bases of them being so close together.  It probably wouldn’t have been an issue even with prolonged use, because it was the heat spreaders making contact and bending, but I’d like to see this fixed in another revision if possible.

My impressions of the Gigabyte K8NXP-SLI motherboard are mostly positive, with a few nagging issues to take care of.  And in fact, they may not even concern you.  If that’s the case, then the Gigabyte SLI board is the fastest motherboard we have tested here at PC Perspective based on ANY chipset, including other nForce4 motherboards.  The feature set is strong and the included packaging offers enough of a value to contend with the Asus and other coming motherboards in this price range.  I was very tempted to give the Gigabyte board our Gold Award, but because of the two issues I mentioned above, I decided that the Silver Award would better fit this product.

Have no doubt, this is an excellent motherboard with all the performance and features you could want in a new system.  If you’re next upgrade calls for an SLI motherboard, then the Gigabyte should definitely be on your short list of options.

Feel free to use our PriceGrabber service to find great deals on this motherboard!

Intel missed on this X48