In our discussion about the new nForce Professional line of chipsets I also learned that SLI technology is arriving to the Quadro line of PCIe GPUs from NVIDIA with this launch.  Technically, it will work in the same way that the current desktop version of the SLI technology works: two identical GPUs working either in tandem in an Alternate Frame or Split Frame rendering mode or separately for up to four monitor output.

What is interesting is what will happen on the software side of the Quadro SLI release.  On the desktop gaming front, there has been a lot of debate as to what actual benefit’s the end user is getting by purchasing twice the video card.  Right now it would appear that the SLI technology really only affects a small to moderate percentage of the software titles and NVIDIA’s focus has been on the major release titles such as Doom 3, Far Cry and Half-Life 2.  Other games like Everquest 2 and Madden 2005 see no benefit at all with two graphics cards because the drivers either disable the SLI technology when running that title or the game engine doesn’t scale well.  I first covered this topic in my initial look at the SLI technology and you can read the gang at HardOCP’s take on it as well. 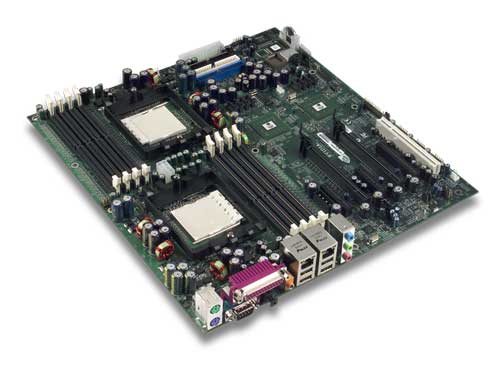 On the workstation front, I was told even by NVIDIA representatives, that enabling the SLI technology on a wide range of suitable applications is going to be more difficult than it is for games.  Applications such as 3D Studio Max and CAD applications more commonly use the OpenGL API rather than DirectX and OpenGL apparently puts a bit more complexity into the equation for the NVIDIA driver team.  We can only hope that NVIDIA has more initial success on the workstation level than they have had on the desktop scene in order to get some good initial performance gains on a wide range of applications.

The nForce Professional 2200 MCP chipset is a step forward in offering board designers a very wide range of options for board layouts and feature sets.  For workstations and servers this means that companies like Tyan and Iwill will be able to tailor specific boards for very specific markets such as the cluster super computer market (with multiple Gigabit network connections over PCIe) and the storage server market (with many SATA or SCSI controllers over PCIe).  We will also be able to finally see a motherboard that offers two x16 PCIe slots with full data capacity for even faster SLI technology.

Though this isn’t NVIDIA’s first attempt at a chipset aimed at the workstation and server market, their timing is much better this time around.  They have a new technology to address in PCI Express.  PCI Express is still basically useless on the desktop front, but in the server and workstation world where I/O bandwidth and networking bandwidth are easily saturated, PCIe is just what they have been waiting for.  Coupling that with the fact that server and workstation builders haven’t had any solid contenders of the AMD-8131 chipset that was with the Opteron on launch date, and we might just see this new addition pick up some momentum.