The New PT Series of Chipsets

The new PT series of chipsets from VIA that is being announced today covers three different market segments, but much of the technology and features are shared among all three chipsets.  In the diagram below you can see four separate categories of features that we will cover here before moving on to the specifics of each of the three chipsets. 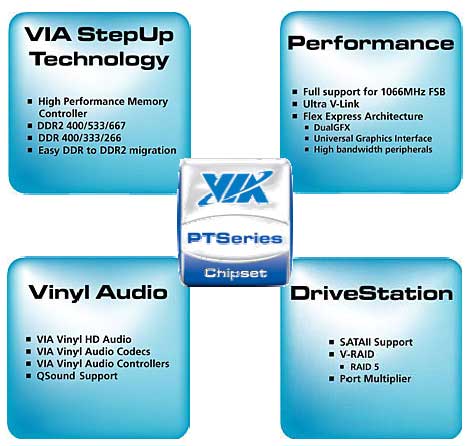 Starting with the performance features, VIA is quick to show that they are the first P4 chipset to market supporting DDR2 667 MHz memory speeds.  At that frequency with memory timings at 3-3-3-8 (module depending) I think we will really begin to see some opportunities for DDR2 to outshine DDR1, finally.

All three new chipsets also support the 1066 MHz FSB that was introduced on the Pentium 4 3.46EE processor last year.  The connection between the north and south bridges continues to be VIA’s proprietary Ultra V-Link with a bandwidth capacity of 1066 MB/s.

Part of VIA’s ‘Flex Express Architecture‘ on the new PT-series of chipsets is a flexible PCI Express implementation that allows for motherboard vendors to design solutions for specific market segments; meaning that their chipsets offer the ability to create several different slot configurations.  Also including in this technology is VIA’s inclusion of two lanes of PCI Express on the VT8251 south bridge, alleviating some of the congestion of having all the PCI Express lanes and storage on a single controller, like the NVIDIA nForce4 MCP has.  In the same regard, with having 20 lanes of PCI Express still remaining on the north bridge of the PT chipsets, lower latency performance is still available for those additional devices that require it.

The VIA DualGFX Express solution is another facet of their performance bundle on the new PT-series.  This is the ability to connect two GPUs (at least one of which is PCI Express) to the same motherboard.  It is being touted as an ideal implementation for multi-display environments, and nothing is mentioned of the NVIDIA SLI technology on its GPUs.  What we do have from VIA is a statement that the VIA DualGFX Express technology ‘stands ready to support all industry Dual Graphics Card standards,’ which is a nice way of saying that NVIDIA’s SLI technology isn’t going to work here.  It is also a jab at the giant to point out that they, not anyone else, is responsible for the exclusivity of the SLI technology on chipsets. 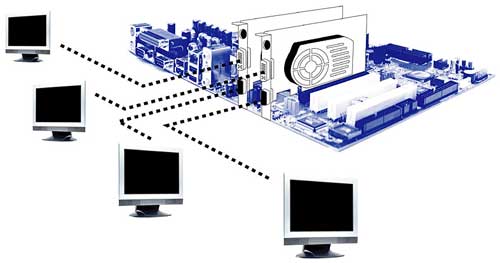 In their defense, VIA is clamoring to show that at least a couple of games already take advantage of a multi-display environment: X2: The Threat and Microsoft Flight Simulator.  They presume with the trend going to multi-display even on the new handheld Gameboy DS, that more developers will take stock in it.  And in many regards to me personally, this is a much more exciting direction for gaming to go in.

The next item we will talk about is the compatibility work that VIA has done that they are calling StepUp technology.  This refers to a user’s ability to ‘step-up’ from DDR1 to DDR2 and from AGP to PCI Express when they are ready and without being forced to as other chipsets are requiring.  The PT-series of chipsets allows board vendors to design solutions with both DDR and DDR2 memory slots on them, called co-layout, that will allow for a single motherboard to support memory from PC2100 all the way up to PC5400.  And on the PT880 Pro chipset, that we will see later, the ability to have both an AGP slot and a PCI Express slot on the same board allows a similar situation for the graphics side of things.

VIA DriveStation is the name assigned to the storage controller on the new VT8251 south bridge.  This chip supports four separate SATA controllers; one for each SATA connection on the motherboard.  Support for SATA II is also on the south bridge along with upgrade RAID support.  Now it supports RAID modes 0, 1, 0+1, 5 and JBOD.  It also allows for cross controller RAID and use of a spare disk for drive failures.  The RAID 5 support is really the most exciting, as it allows the use of a three drive array for both parity and read speed performance increases, without losing 100% of a single drive’s space.

VIA is also the first to announce support for SATA port multipliers, which are a new technology that allow you to connect multiple SATA drives to a single SATA channel, similarly to how IDE works now.  The 8251 supports up to 60 hard disks connected to the same PC, but of course the more drives you connect to the SATA channels the less bandwidth is available to any one disk at any given time.

VIA’s south bridge audio solutions are dubbed VIA Vinyl and include several different versions for budget boards and higher end solutions.  The bottom of the line up is the VIA Vinyl AC97 8-channel solution that is 96k/20bit quality resolution.  Moving up there is a HD Audio solution that runs at 192k/24bit, still at 8 channels.  Also, VIA’s external chip design, the VIA Vinyl Gold based on the Envy24PT chip can be used as an on-board solution.