The VIA PT880 Pro was dubbed the perfect stepping stone chipset for the P4 market in the ongoing migration to both PCI Express and DDR2 technologies.

Besides having support for all the features we went through on the previous page, the PT880 Pro has one additional feature that really helps it to stand out and give it some teeth.  It supports both an AGP slot and a PCI Express graphics slot on the same board.  What’s more is that you can utilize both of these slots at the same time to take advantage of the DualGFX features as well.

The AGP slot on the board is a full 8x AGP slot, routed through the north bridge, as it not a hack design taken through the south bridge and the PCI bus like other solutions you might have seen.  So your AGP graphics card performance will be on par with what you have on your current system.  The PCI Express slot is not a full x16 lanes though — it is only running at x4 PCIe.  Keeping in mind though that the current generation of PCI Express GPUs doesn’t even saturate the x4 PCIe bus, there is little reason to dock VIA for this configuration.  I was told it was necessary to allow easy routing and tracing of both an AGP and PCI Express bus on the same layout. 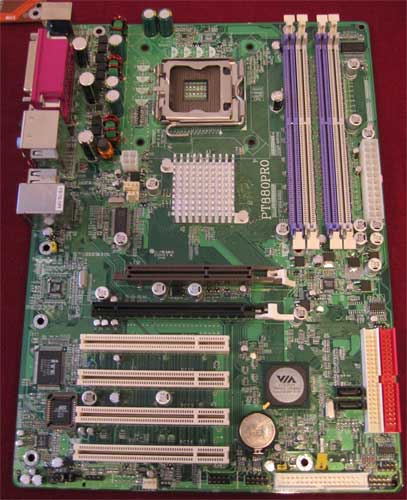 I won’t get into the layout on this board much, since it is merely a reference design, but we’ll see at least one issue come up with the location of the AGP and PCIe slots when we test the board.