I originally received a reference board based around the PT880 Pro chipset and had planned on having it run our full suite of benchmarks to test the performance of VIA’s new platform.  Unfortunately, due to having a slightly less mature motherboard than I would have liked, the performance was finicky and the stability was less than hospitable to be run through the gamut.  As you might guess then, I don’t have any benchmarks for you on this chipset preview, instead that will have to wait for either another version of the reference board or a retail motherboard to hit our desks.

All is not completely lost however, as I was able to get the board running well enough to play around with the DualGFX feature (though at a much slower than optimal configuration).  I was able to get BOTH an ATI X800 XT Platinum Edition AGP and an ATI X800 XT PCI Express to run on this board at the same time.  Briefly here I’ll share my impressions of this technology and how it worked. 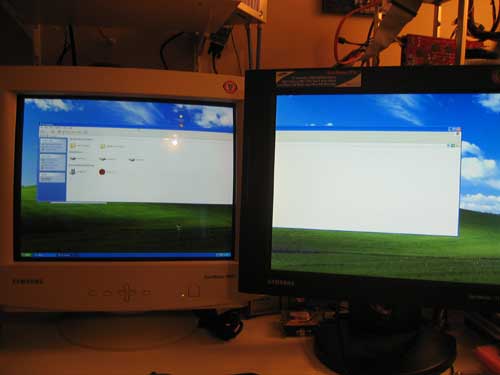 An AGP and PCIe X800 card running on the same system

After the initial setup hassle, which included having only one card installed, completing driver installation, removing the card and installing the other to install its drivers, and then placing them both in the system, it was all gravy.  Using the standard Windows method of expanding my desktop, I was able to easily have both monitors connected to the test system at different resolutions. 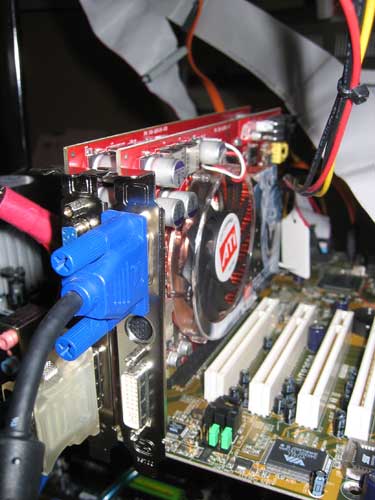 The two cards are pretty cramped on this reference board

As you can see here, the installation of the two video cards left very little room between them and may have eventually caused some heat issues in an enclosure.  However, I believe that board vendors will have the option of separating these slots somewhat.

Besides the offering of two desktop options (thanks to two GPUs), I was more interested in the power that you have with two very high end graphics cards on the same motherboard.  Previously, with multi-monitor setups (like the one in my system), you would have a high end AGP card but a low end PCI card that is really out dated when it comes to 3D rendering.  The thought occurred to me that I might be able to run two games at very fast speeds on the two separate cards and separate monitors. 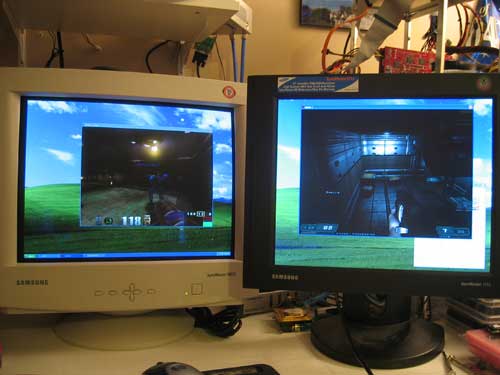 Both Quake III and Doom 3 running

From the above image, you can see that I am running both Quake III and Doom 3 on the same system, in a windowed mode, on separate monitors.  However, the gaming was far from fast on both games.

What I saw occur was that which ever of the two cards was set as the ‘primary’ card in the Windows desktop options, showed good performance on the game it was running.  On the secondary video card, the game performance turned out to be much, much slower than on the primary. 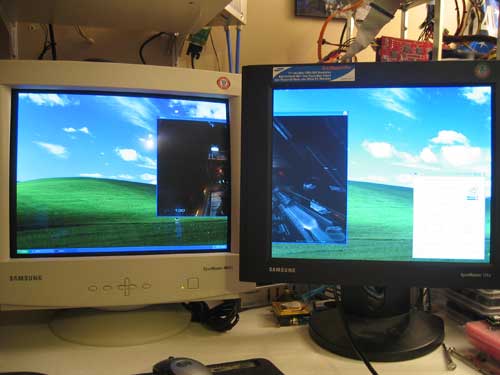 Above you see me running Doom 3 in a window spanning the area between the two monitors.  The difference in sizes is caused by the lower resolution on the LCD on the right.  What I saw in this case was that a spanned window played much slower than a window on the primary video card’s monitor.

This turns out to be a very complicated issue when it comes to rendering performance.  My educated guess is that the 3D rendering done on all of the tests I ran was being done a single graphics card; namely the one that was assigned as the ‘primary’ card in Windows.  This means that when running two different games on a single machine, as I was in my top image, the primary card is actually responsible for both rendered images, meaning that we will obviously see a slow-down on both games.

I’m guessing that the images for the primary card’s monitor were being rendered and then put in that card’s own frame buffer. Then in the case of the secondary card, the rendered image needed to be moved from the primary card to the secondary card before being displayed.  This causes additional slow down as well.  Finally, when we span a single game across two monitors, the same primary card is responsible for rendering both sides, but only a portion of the rendered image must be copied to the second card for output.

Interestingly, I also found by accident that the choice on your primary card can make a difference in the performance deltas you see between running games on both monitors or in spanning them.  When the PCI Express card was set as the primary GPU, the frame rate on the secondary monitor was noticeably faster than if the cards roles were reversed.  It turns out that because the PCI Express bus has a significantly faster upstream bus, it could feed the AGP downstream bus relatively easily.  However, moving from the much slower AGP upstream bus to the wide open PCI Express downstream bus left a large portion of the data stranded across the two buses, slowing down the frame rates.

The reason I note this is that it is one of first times I have seen a tangible use of the bandwidth on PCI Express for gaming (compared to AGP).  Here we see the benefit of having an equal up and downstream bandwidth speed and we also can see where the AGP bus limitations are coming into play.