VIA’s new line of PT-series chipsets for the Pentium 4 processor look like they can be strong contenders in a market that is overloaded with high priced products.  The PT894 chipset is the direct competitor of the Intel 915 and 925 chipsets and offers the majority of the same features, with the added benefit of having support for both DDR and DDR2 memory on the same board layout (there are some Intel 915 boards with dual ram support, but they are expensive and hard to find).  This should allow for current users to upgrade to a new LGA775 platform with PCI Express for a slightly lower cost by using their existing memory and using a cheaper motherboard.

With the PT894 Pro chipset, you get the advantage of dual PCI Express graphics slots, but there may be some confusion about using this for SLI purposes.  As of now, neither NVIDIA or VIA are really talking a whole lot about it, it’s safe to say that SLI doesn’t yet work on the VIA DualGFX chipsets; at least not yet.  Add that to my list of wants.

The real story in this chipset launch though appears to be the PT880 Pro chipset that is the stepping stone from VIA for the DDR2 and PCI Express migration.  The board supports both DDR and DDR2 memory as well, but it also adds support for both an AGP slot running at full 8x speeds and a x4 PCI Express graphics slot.  This combination allows users with current AGP/DDR setups to upgrade to a new LGA775 motherboard and processor while keeping their existing video card and memory, and upgrading whenever they choose to do so.

Even better, a user can keep their AGP graphics card and then add a PCI Express card later and still be able to utilize both cards for a multi-monitor setup.  Though you can’t take advantage of both cards 3D gaming power as you might suspect, the fact that you are not completely throwing away the investment in your AGP card is a huge advantage for gamers and enthusiasts tired of just throwing components away (assuming you have a second display to use).  The PT880 Pro offers so much more than any other Intel chipset today.

What I would really like to see is this same configuration of AGP and PCI Express on the AMD platform.  Being that the gamer’s choice is still the Athlon 64 processor, having this upgrade path for those looking to upgrade to the newer 939-pin processors would be a big hit if it performed well and was stable. 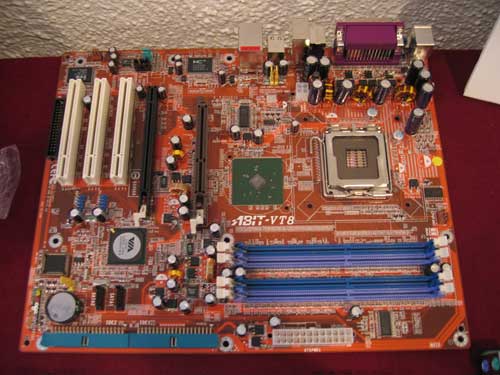 Finally, the big stumbling block here is chipset availability.  You’ll remember that we previewed the first PCI Express chipset for the AMD platform from VIA, the K8T890 back in September of last year, and I still haven’t seen a retail motherboard for sale or even an early sample reach my desk here.  The success of the PT880 Pro in particular depends on VIA ability to get this product in the hands of users while they still need it — that means before DDR2 and PCI Express become mainstream.  The longer they wait, the less the demand is going to be for a stepping stone of any kind.