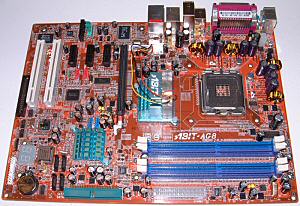 The Abit AG8 is well designed without any real layout issues. The socket area is very clear with only two low-profile capacitors near the socket. Testing with the Zalman CNPS7000A-Cu, it clears all components but does come a bit close to the cooler Abit has placed on the Northbridge. Because the Northbridge heatsink has a 40mm fan on it, it sticks up a little higher than typical 915P boards and may cause problems for other larger heatsinks.

The active cooler on the Northbridge however is a welcome addition since the Northbridge does get hot. In fact, when the Northbridge cooler slipped off during Windows installation, I kept getting BSODs and IRQ conflicts. For you cooling fanatics out there, the positioning is a bit peculiar as it blows the hot CPU air onto your Northbridge and video card. Instead having the fan oriented from front to back will probably give better cooling results. 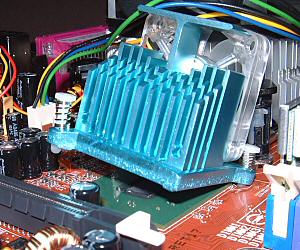 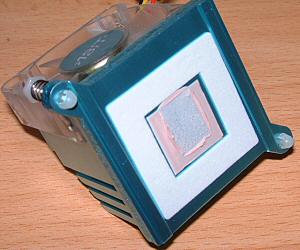 Left: The Northbridge cooler popped off during testing.
Right: The cooler uses wax thermal pad for an interface. The white square you see
is a spongey foam application used as a shim.

When the cooler slipped off, it gave us a nice opportunity to examine the fan and the thermal interface. The fan is a T&T 4010L12C 40mm fan which is rated at 4500RPM, 4.27CFM, and less than 19dBA. The thermal interface uses a thermal pad which I replaced with some Artic Silver.

Like the Northbridge, there is a baby-blue low profile heatsink over the Southbridge. I don’t know if this actually helps performance but it does look nice. 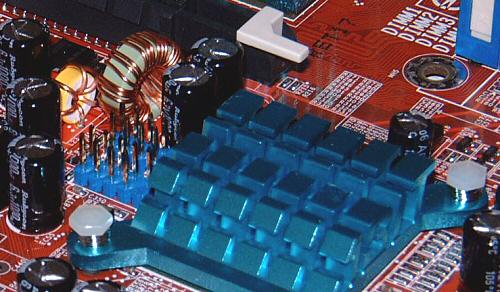 USB headers are crammed amoung capacitors and the heatsink.

Next to the Southbridge are the USB 2.0 headers. These pins are trapped amoung some capacitors which can hamper installation (especially if your fingers are not so nimble).

Along the front edge of the motherboard is the 20-pin compatible 24-pin ATX connection and the single IDE header. The IDE header, like in many other ABIT boards, is in a location that makes it hard to wire an optical drive in a tower case using typical 18′ cables.

The RAM DIMMs are far enough from the x16 PCIe slot so that you shouldn’t have to worry about longer video cards blocking access to the RAM clips.

One of the PCIe x1 slots is located directly below the x16 slot which is unfortunate if you are using a video card with a large cooler. A large video cooler will block access to this slot which only leaves two other x1 slots for your needs. 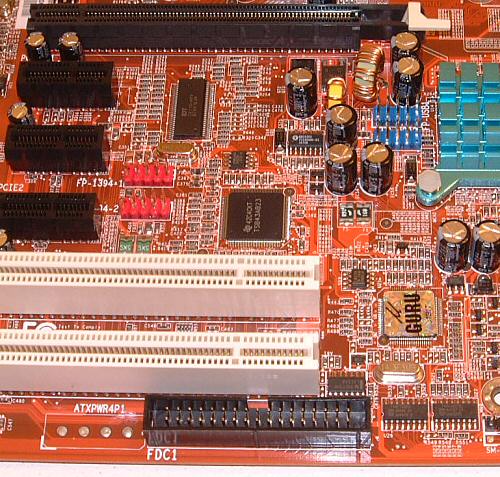 The floppy connector is in a strange spot along the bottom edge of the board. This may prove to be a wiring challenge for those of you still using 3.5′ disks, but I’m guessing many of you have gotten rid of floppies.

On the rear panel there are all the connections you will need including Firewire, and SPDIF optical input and output.