Being the first nForce4 Ultra motherboard we have reviewed at PC Perspective, the Fatal1ty AN8 is going to set the standard by which other nForce4 ultra boards are to be judged.  We do, however, have quite a bit of experience with the SLI version of the NVIDIA chipset, so we’ll make comparisons where appropriate. 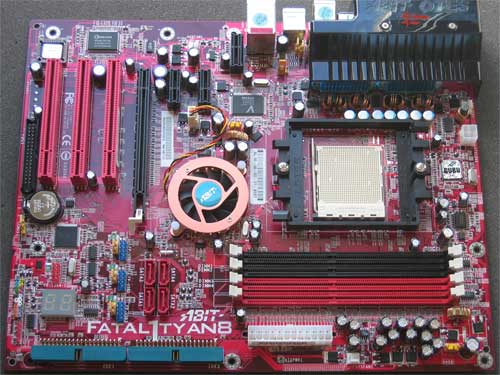 The overall feeling on the layout of the AN8 is one of openness.  The areas around the CPU socket, memory, PCI slots and power connectors are all spaced fairly well and present no obvious problems right off the bat. 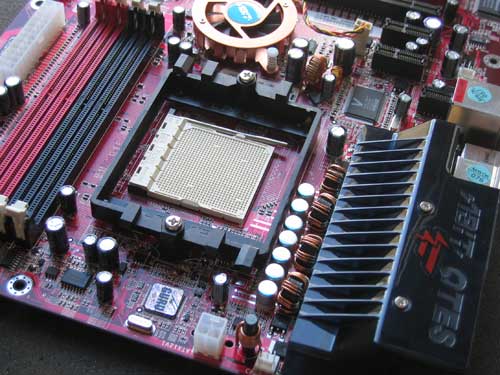 The OTES cooling system seen on the right side of this photo houses the MOSFET heatsinks and provides good air flow out of the case.  Not only does it remove the heat from the capacitors around it, but the increased air circulation is also going to be an advantage for the processor since it keeps air from stagnating around the CPU heatsink.  Though there is a noticeable noise level coming from the OTES fans, they can be adjusted in the BIOS to only turn on at certain temperatures. You can customize the cooling, thus allowing you to find your optimal noise level for an idle system.

The CPU fan connector is seen here just to the right of the 4-pin ATX supplemental power connector.  Both are easy to access and don’t have components getting in the way of fingers during installation or removal. 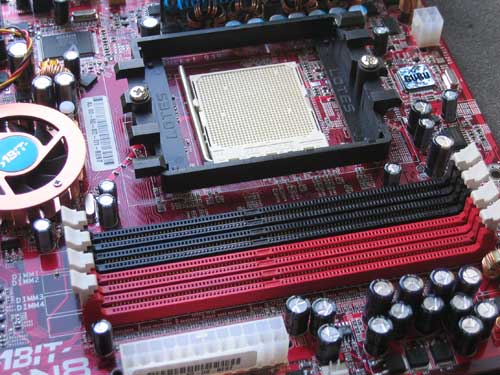 The four DIMM slots on the Fatal1ty AN8 board are color coded for easy memory instsallation — unfortunately, I still got it wrong the first time.  My instinct tells me that the two memory channels should start at DIMM1 and DIMM3, however the AN8 alternates the channels.  You simply have to install the memory modules in order from left to right.  And don’t worry, if you get it wrong, the BIOS POST screen will tell you wheter you are in single or dual channel memory mode.

Evidence of a good design can be seen by the fact the DIMM slot retention clips have absolutely no way of interfering with the graphics card.  No longer are you going to be required to remove the GPU in order to install new memory, nor will the process of removing the video card scrape your fingers along the edges of memory modules.

The 24-pin ATX power connector is seen in this photo, and again the installation and removal of the PSU cable isn’t hindered by any capacitors. 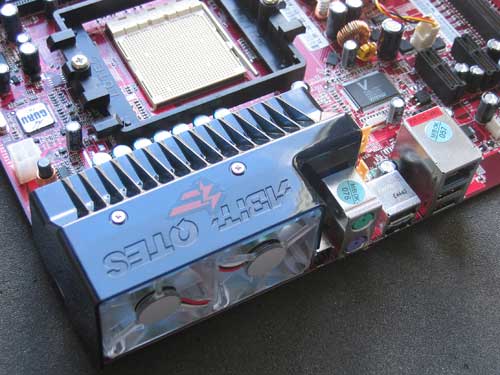 Here is another shot of the OTES cooling system, this time from the back of the motherboard.  You can see there are two seperate fans that exhaust warm air from the heatsinks under the plastic housing.  Also, another testament to ABIT’s ability to learn from customer feedback, is the fact the OTES cooling system will not interfere with larger and more complicated processor cooling systems.  In the original OTES system, ABIT used a much larger and more intrusive design that hindered support for large heatsinks, but there is no such problem on the AN8. 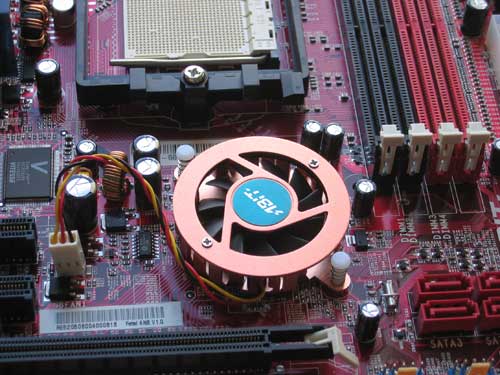 Under the heatsink you see above lies the NVIDIA nForce4 Ultra MCP that is responsible for powering the entire suite of motherboard components.  Unlike the nForce4 SLI motherboards we have reviewed (like the Asus A8N-SLI and the Gigabyte K8NXP-SLI) the Fatal1ty AN8 motherboard does not put the north bridge to the immediate right of the PCI Express slots.  That design forced users to put their very hot graphics card right over the equally hot nForce4 MCP, and even occasionally causing heat related instability when overclocking.  But with ABIT’s design and the lack of two x16 PCIe slots (no SLI), they were able to shift the slots down on the PCB and place the chipset farther away from the GPU to improve heat dissipation. 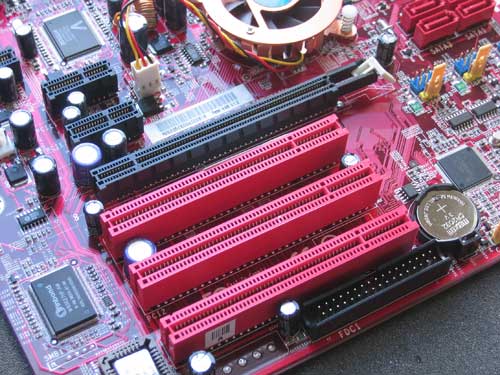 Using the nForce4 chipset means losing the AGP bus and gaining the PCI Express bus.  There is a single x16 slot for the GPU and two additional x1 PCIe slots for future add-in cards.  Additionally, there are three legacy PCI slots, though one will likely be blocked when a video card is installed (depends on the size of your video cooler).  As with most recent Abit designs, the ultra-legacy (read: old) floppy connector has moved to the very bottom of the motherboard — a most cumbersome spot for installation. 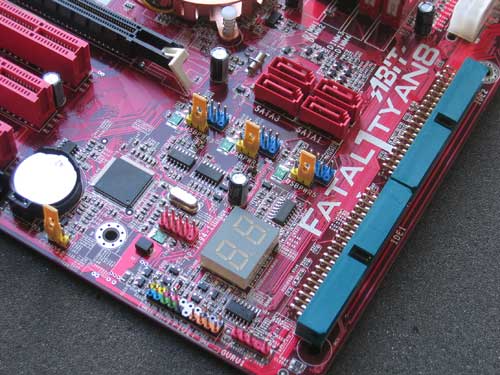 The bottom right of the AN8 motherboard shows all the additional features of the product.  The nForce4 chipset provides four SATA channels supporting RAID 0, 1 and 0+1, and as a bonus the SATA connectors are using the newer, friendlier, and sturdier design.  Directly below the SATA channels are the three headers for additional USB ports and the corresponding “power on” jumpers for them.  The Texas Instruments TSB43 chip provides the Firewire capabilities that the AN8 provides, but requires using the included bracket connected to the header (though one Firewire port is included on the rear I/O).

The two IDE channels face perpendicular to the motherboard face, thus keeping the cables routed away from the other on-board components.  A POST code display will help with any installation hiccups you run into and the color coded case connection pins make sure you aren’t guessing or looking for a manual to power up the board. 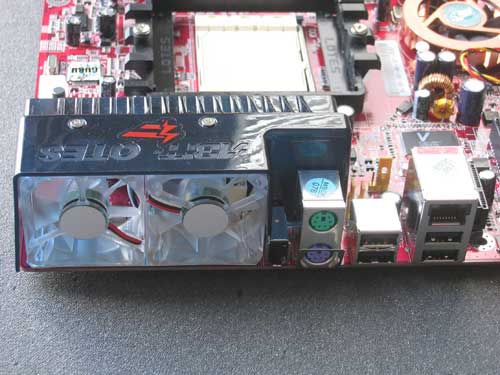 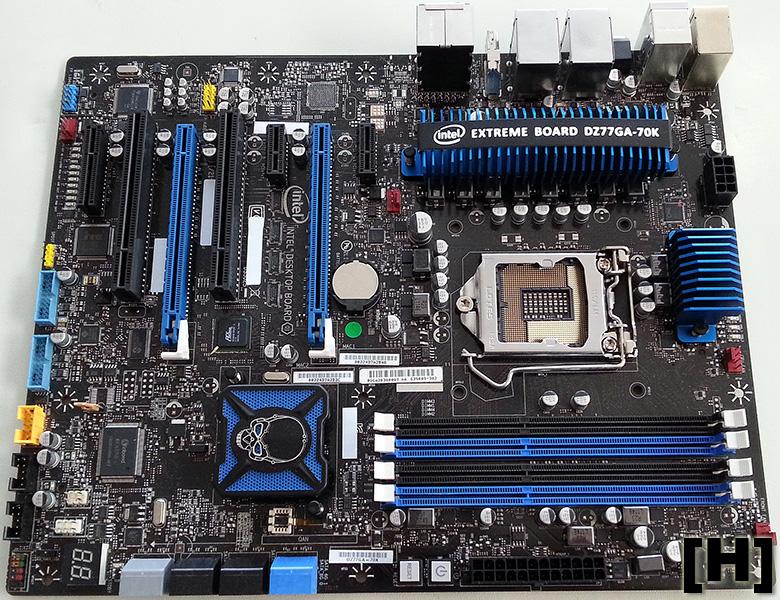