The big feature of the Asus P5GDC-V is the dual RAM format support. It can accept up to 4GB of DDR on 4-DIMMs (all dual-channel), or 2GB of DDR2 on 2-DIMMs. The only catch is that you can’t mix-and-match DDR2 and DDR at the same time. Asus warns that doing so may damage your system, so best to heed that. 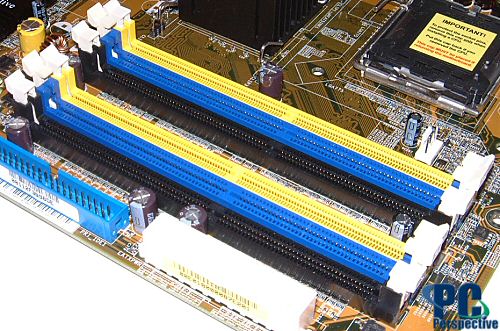 Being able to support both types of RAM is very useful. It opens up the possibility of upgrading from DDR to DDR2 in the future when prices and specs are better. Also this flexibility means that you can always salvage the DDR2 RAM and replace it with your cheaper/older in the future as you upgrade systems and components.

The second major feature is the Intel Media Graphics Accelerator 900. I know gamers and enthusiasts scoff at such things, but for businesses, IT managers, and general users, integrated video isn’t necessarily a bad thing. It allows you to use the motherboard without having to purchase a separate PCI Express video card. As we will see in the testing later on, the 3D performance is pretty poor, but it good enough for general 2D/Desktop applications. If you need something beefier, you can always buy a seperate PCI Express card later.

One interesting aspect of the integrated solution is that you can always use the onboard video as a second adapter for multiple displays.

While many other vendors have all but removed Parallel ATA from their board designs, Asus has embraced the fact that many customers still use these ‘older’ drives. The P5GDC-V includes an ITE RAID controller, in addition to the single Parallel ATA connection offered by the Intel 915 chipset, for a total of six legacy drives! 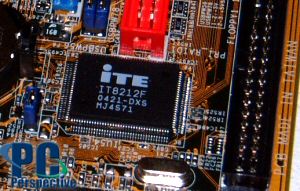 This brings us to our next feature: SATA Matrix RAID. There are four SATA connections on the P5GDC-V and all of it supporting Intel’s Matrix RAID functionality. Combine this with your Parallel ATA on the ITE chip and you have yourself some serious flexibility of performance, security, and storage.

Asus did not skimp on the audio component of the P5GDC-V as it uses Intel HD Audio through the CMI 9880 chip. Intel’s HD Audio is a great step above the older AC’97 codec and offers a lot more functions like Dolby Live! and multiple source output. 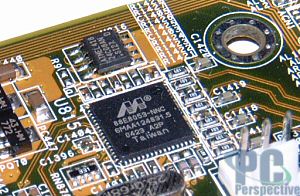 The gigabit LAN on the P5GDC-V is a Marvell Yukon controller that shares the PCI Express bus. This means that you will have strong network performance since the bandwidth of the PCI Express is much higher than your old PCI.

As for connectivity, the Asus P5GDC-V has all you have come to expect from Asus: eight USB 2.0 connections (six usable out of the box) and two Firewire (one on the rear and one on a bracket).