The Epox 9NPA+ has a unique design as most of the new PCI Express generation motherboards provide additional options for board engineers.  Below is a complete shot of the board, with a link to a larger version. 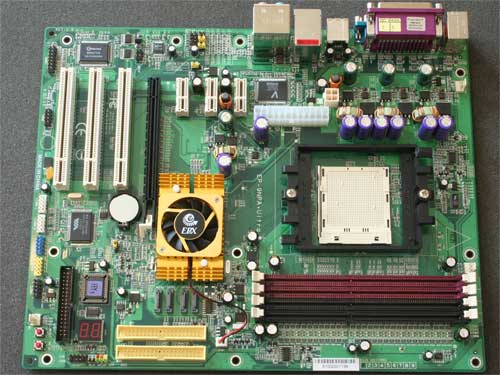 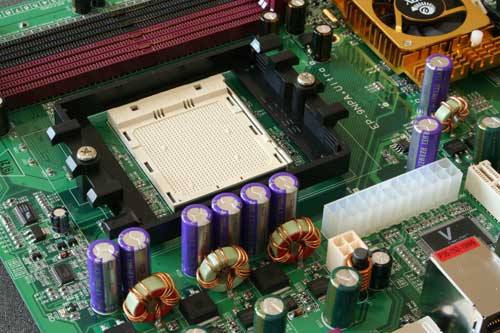 The processor socket is placed a good distance from any interference of cables or heat from either the graphics card or chipset.  The orientation of the retention mechanism makes installing the standard AMD heatsinks very easy as no capacitors or other board features will get in the way of the heatsink’s arm.  The row of capacitors bordering the CPU socket may come into play if you are using a larger than standard heatsink, but they appear to be low enough to avoid most contact.  The DIMM slots on the other side of the CPU socket pose less of an issue.

The ATX power connectors don’t interfere with much here though the 4-pin connector is a bit awkward to get to at times just based on its orientation.  No major issues here though. 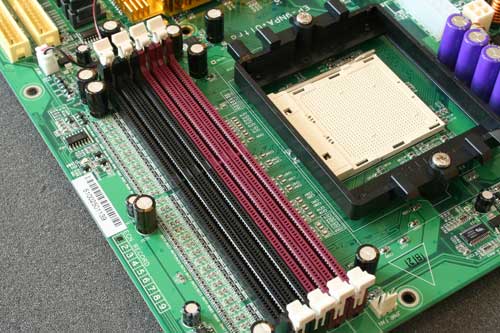 Here you see the four DIMM slots with their DDR terminators behind them.  They are spaced just enough for the Corsair Pro modules that I used for testing to fit in there without hindering contact, though there did appear to be just a slight bit of warpage of the modules when installed side by side.  This may not be an issue though if you have only 2 DIMM modules as you would install them in the dual channel mode, one in the purple and one in the black slot. 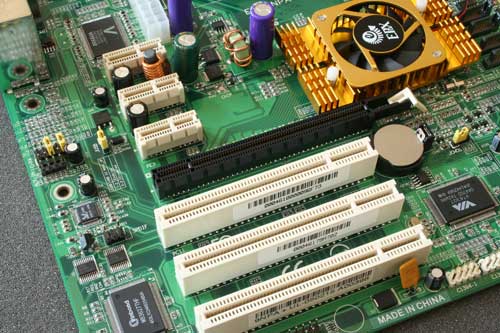 The Epox 9NPA+ motherboard’s expansion slot configuration shows a preference towards the coming days of PCI Express add-in cards rather than keeping users in touch with their past PCI days.  There are three PCIe x1 slots on the board, all usable even when a high end GPU is installed.  The three PCI slots aren’t quite as lucky though — if you have a double-wide video card cooler then you’ll only end up with a single useable PCI slot; two at best if you use a standard GPU cooler. 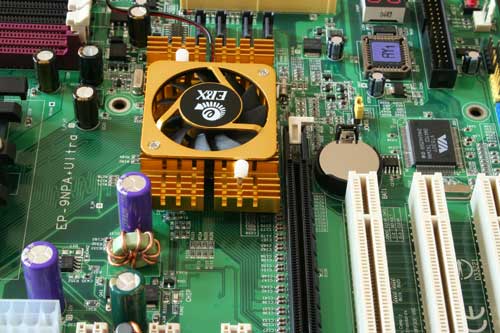 Epox’s placement of the chipset and therefore the chipset cooler is different than other nForce4 motherboards we have reviewed.  Epox kept the chipset from being directly underneath the video card by moving the PCIe x16 slot down a bit on the design, which also allowed to have three fully usable PCIe x1 slots.  The down side is, as you can see from the image above, that the nForce4 Ultra heatsink is very close to the back of the PCIe slot, and thus your graphics card.  This didn’t pose a problem for the X800 XT or 6800 GT cards that I tested with while reviewing, and as long as cards stay in spec there shouldn’t be any problem, but its something to think about. 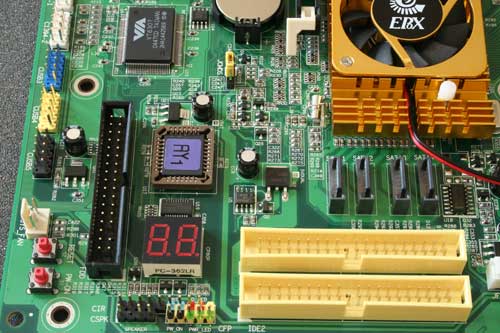 In the accessories section of the Epox 9NPA+ motherboard we find all the storage options that they have provided and the headers for the additional external accessories.  There are two IDE channels on the board for your optical and legacy hard drives.  (Side note: I’ve oogling the new Plextor 716SASW Serial ATA Dual Layer DVD writer…)  There are four Serial ATA channels on the board provided by the nForce4 MCP chip that also support RAID 0, 1 and 0+1.

Epox has a POST diagnostic LED on the board for any problems that might pop up during installation as well as including power and reset buttons on the PCB of the motherboard itself, which is a big plus for enthusiasts who are constantly inside their computer.  The VIA chip at the top of the shot above is for Firewire support and the headers to the left of it provide access to the additional USB 2.0 and Firewire ports via the included dongles. 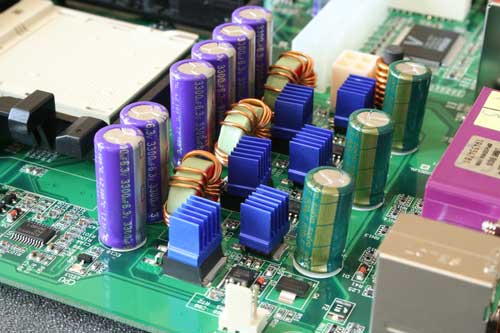 This shot shows the included, but self installed MOSFET heatsinks.  These are part of the package in the box, but you’ll have to have 1337 modding skillz to install these puppies.  No really.

Last as always, the external connectors on the motherboard gives a look at other features included on the motherboard.  We have an 8 channel audio setup on-board powered by the Realtek ALC850 chip.  On the back panel there is an SPDIF and an optical output plus the size mini-plug connectors.  There are four USB 2.0 channels accessible as well as access to the Vitesse-driven Gigabit Ethernet connection.