The Intel Developer Forum is full of all kinds of great information on dual core processors and the chipsets that support them. Read our coverage of the first half of IDF Spring 2005.

The Intel Developer Forum is one of the only shows that I attend on a yearly basis, and when I return from it I actually feel like I LEARNED something about technology.  While Computex is good for seeing new products, you are almost always meeting with the marketing reps of the manufacturers and not the engineers, so you get more fluff talk than real tech talk.  IDF is different — the sessions and panels are run by the real movers behind Intel — the engineers and developers of the technologies that Intel is selling.

This year’s show has so far proven to be no different, as day 1 of the show came to a close and we got some great information on the dual core mayhem that is sweeping the CPU world.

Craig Barrett, current CEO of Intel, gave his annual Spring IDF keynote speech to start off the forum in the right direction. 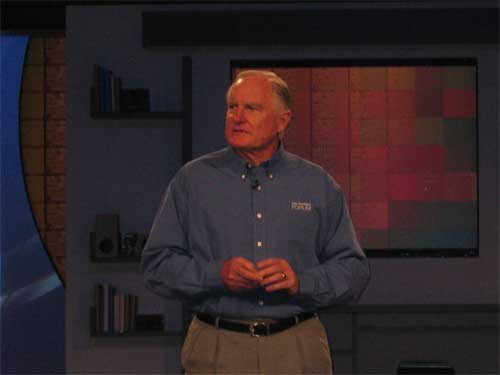 Craig’s keynote touched on the aspect of the IDF becoming much more than it was years ago, back when it was just a meeting place for application and hardware developers interacting with Intel.  Now it has grown into a industy meeting place where the press, Intel PR, Intel engineering, and other industry leaders are confering and sharing information.  IDF is just of one of those shows where you always know you’ll come back with new information on Intel’s plans and roadmaps — something that is very different from their competitor.

As part of the keynote, a video was presented of the employees of the Fab 11x which is currently a 300mm wafer facility working on 90nm technologies.  It showed the extensive engineering behind the fab as well as the individuals showing their pride in being able to work with the technology at Intel.  Barrett remarked that in comparing todays fab construction costs to the first fab in the 1970s, Intel continues to NOT be able to build a cafeteria for less than the amount of the first Intel fab!

As for future Intel development, Barrett was keen on showing that Moore’s law was not slowing down; though Intel was definitely going to have to make a shift to keep up with it.  Moore’s law states that the number of transistors on a chip will approximately double every 18-24 months.  Instead of increasing the transistor count and frequency of chips in tandem, Intel has now realized that dual- and multi-core is going to have to be the path they take to keep up.  The new Pentium Extreme Edition dual core processor is going to have 230M transistors, but Barrett predicted that within a few years we will see 10 billion transistors on a chip in 20nm technology. 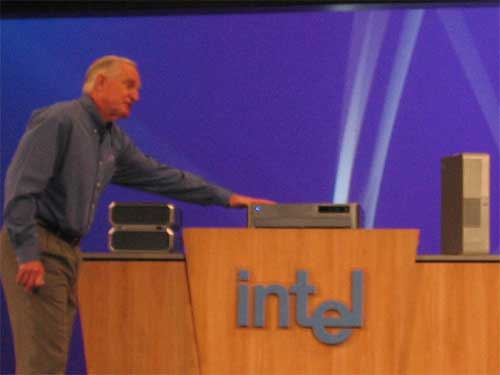 The far left computer is the typical home theater PC for 2005, but the one in the center he claims, will be the typical HTPC in 2006.  The far right PC shows a what a typical digital office PC format factor might be.

Barrett also had some guests from a popular MTV show called “Pimp my Ride” come in with a customized Chrysler, with of course some Intel technology in it. 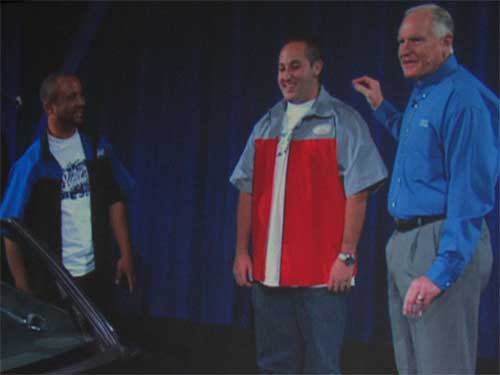 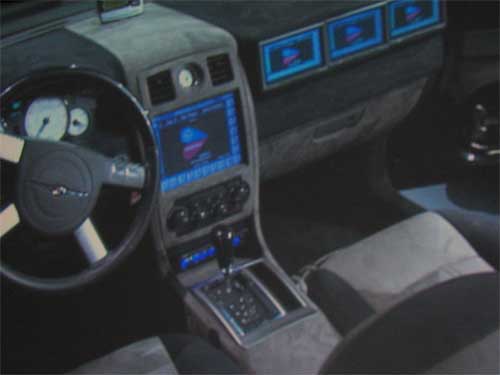 The quality of the images is a bit low since I was photographing the overhead projection screen, but you can see the Intel Centrino logo on the dashboard displays. The car uses this technology to monitor everything in it, including replacing the side mirrors and rear-view mirror.  They also showed how they could control the cameras and stereo remotely with a Pocket PC.

Finally, Barrett had Burt Rutan, the X-Prize winner for private space flight, on stage to talk about the importance of innovation. 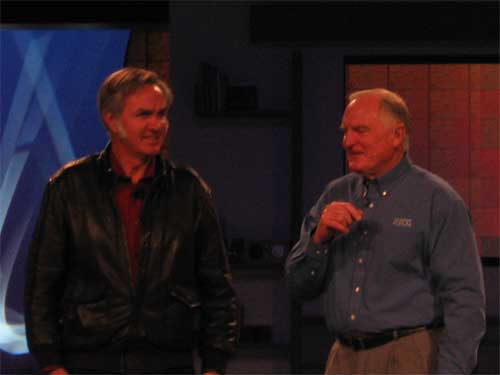 In his last few words as CEO at this year’s IDF, Barrett said you can’t be afraid of failure because its part of the innovation process.  I wonder if he was referring to any particular Intel product?

Overall the keynote was fairly good, though it lacked the classic surprise announcement that usually comes from Barrett on stage.  It really didn’t matter – Intel wasn’t done yet and we have a lot more information for you on the following pages.

Red vs. Blue … in downtown! 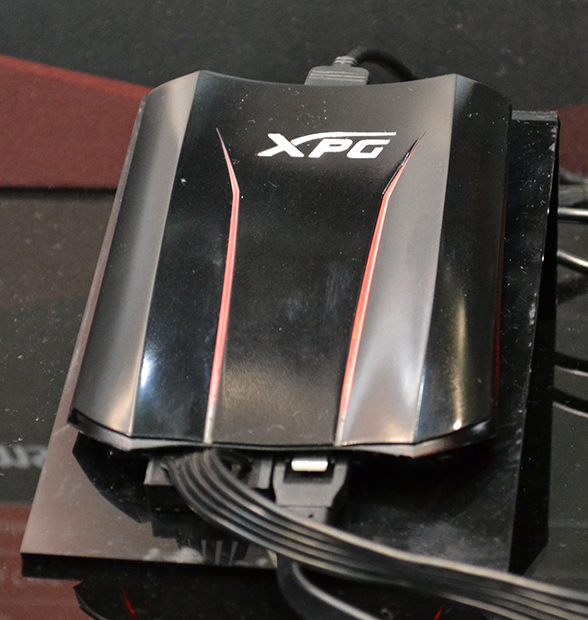 Just a little more Computex in the cache; check out what Adata is up to