Two new processor lines were ‘sort of’ announced at the show: there will be both an Extreme Edition dual core, and a standard dual core Pentium processor…but this time without the ‘4’ suffix.

Here is a quick run down on their current roadmap. 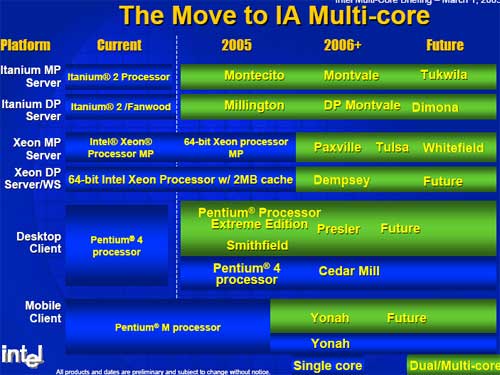 As we told you yesterday with our initial quick look at dual core technology, the new Extreme Edition processor is going to be called the Intel Pentium Extreme Edition 840. 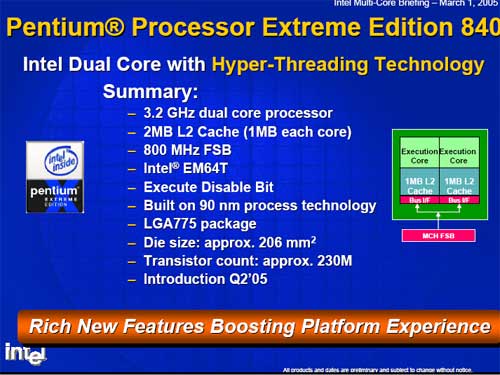 As you can see from the slide above, the processor will run at 3.2 GHz on each core, 2MB of L2 cache (1MB on each core) and run on the 800 MHz FSB.  The return to the 800 MHz FSB is a bit of a disappointment, but in reality we didn’t see a dramatic improvement in it.  Since the new 955 chipset will still be able to support 667 MHz DDR2 memory we should keep some of the increased memory performance.  The new features that were introduced on 3.73 GHz EE processor are still seen here as well, including 64-bit support in EM64T and Execute Disable Bit.  Still fitting in the LGA775 package and in the 90nm process technology, the new Extreme Edition 840 has a transistor count of 230 million and a die size of 206 mm^2.

With all this change comes a new logo as well. 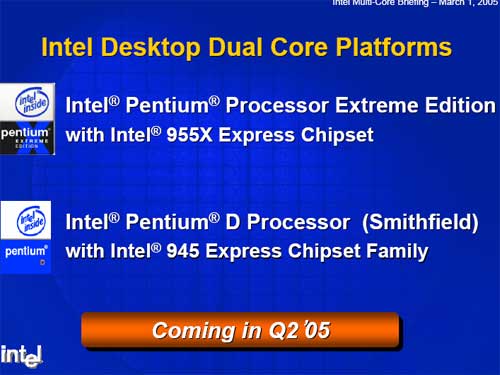 The new logo for the Pentium D looks remarkably like the Celeron and Pentium M logos.

This logo design is really making me lean in the direction of Intel making another dramatic shift in their marketing.  Similar to how the Pentium M is just a single part of the Centrino platform, and I think we’ll very soon see that the Pentium D will be just a single part of a new desktop-based platform marketing scheme.  Whether its called “Desktino” or something else, everything at Intel seems to imply they will apply the same successful marketing used with the Centrino on these new desktop PCs.  It has the possibility to revolutionize home PC buying experience.

In order to use the new dual core processors, we need a new chipset as well.  After all has been presented to me, there was still one question somewhat unanswered: why won’t 925X boards work with the new processors even though they are using the same front-side bus as well as the same processor socket?  I have slightly conflicting answers from a couple of Intel reps, so I’ll save the final result for either when I get a more definitive answer or when I get the hardware myself.

In either event, the 955X and 945 chipsets are going to be released in conjunction with the Intel Pentium Extreme Edition 840 and Pentium D processors.  Here is a quick look at the new core logic. 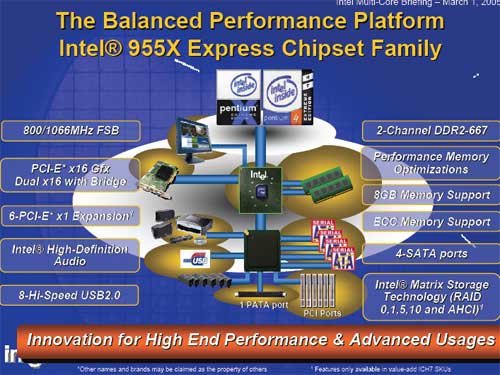 This diagram on explicitly lists the 955X chipset but we understand the 945 should offer the same feature set with only a few exceptions.  Some of the more important features listed here is the PCI Express graphics with the option for “dual x16 PCIe with Bridge”.  It looks like NVIDIA may not be the only doing an SLI capable motherboard after all, that is if the NVIDIA drivers don’t block it out!  We’ll learn more in the upcoming weeks.

There are also a total of 6 x1 PCI Express expansion slots mentioned on the platform, but there is no mention of how many controllers there are to seperate the PCI lanes with or whether all the lanes are on the north bridge or on a combination of north and south.  The chipset supports DDR2-667 memory in up to 8 GB of memory, so we may finally be able to move past the 4 GB 32-bit memory barrier.  The 4 SATA channels listed there are in fact SATA2 channels, and yes they still only have a single PATA port for optical drives.