Just like the ABIT and the Asus previously, overclocking doesn’t benefit 3D applications/gaming much, if at all! The main benefit from doing this kind of system overclocking is to help boost intensive “desktop” applications like number processing and computations, media editing, and 3D rendering. 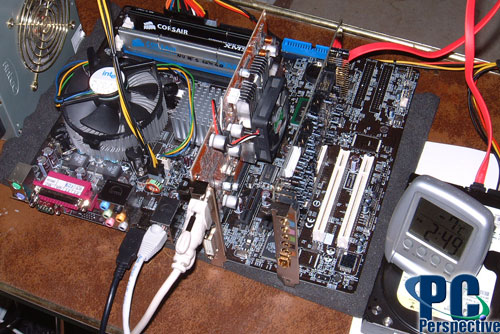 Notes:
Considering the cheaper price of the Chaintech V915P compared to other 915P motherboards, it’s no real surprise to see it not overclock as well. Starting overclocking at 238MHz was a bit too much for the Chaintech – it would either freeze during Windows boot, or Sandra CPU. At 235 to 236MHz, things Sandra CPU would complete, but 3DMark05 would fail. 234MHz was the highest stable setting where all the tests can complete successfully.

Hanging out with the cool kids

A funky room for a hard drive