The BIOS on the Foxconn WinFast 760GXK8MB-ERS has a bit more features than that seen on the ECS 760GX-M, but still falls short of anything remotely usable for an enthusiast.

The big BIOS feature is the ability to set all four timings for the memory which is something many of us take on other boards.

The other notable feature of the BIOS is something called SuperRecovery Hotkey and SuperBoot (seen in the picture above). SuperRecovery Hotkey is an interesting feature that partitions part of your drive to store BIOS information. This is similar to the mirroring and dual-bios setups you see on some other boards, but Foxconn’s implementation uses your drive.

SuperBoot is the most interesting of the bunch. This feature allows the motherboard to skip the entire POST sequence allowing you to go straight to your OS boot-up without delay (i.e. no delays by detecting drives or CPU configurations). This is as close as we’re going to get to “instant-on” on a motherboard and so far only Foxconn is implementing this feature.

The design of the Foxconn WinFast 760GXK8MB-ERS for the most part is acceptable for a micro ATX motherboard, but I have a few gripes.

First are there a few capacitors that get in the way of your fingers, notably the 12V connector and the AGP slot. I nearly broke the capacitor near the 12V when swapping boards. Not a good thing. 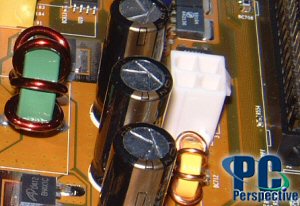 Be careful not to break off a capacitor when uninstalling
your 12V power cable.

Another gripe is that there are no labels for the front panel pins. This makes installation a pain since you have to reference the manual. It’s such a simple thing to put some text or color-code the pins, but Foxconn for whatever reason chose not to. 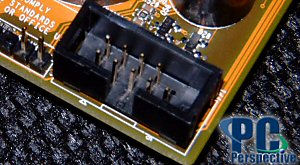 Try figuring out how to wire your front panel without
labels or colors.

The heatsink on the northbridge is low profile, so it may not affect the installation of larger CPU coolers. But the proximity of the DIMMs next to the socket will be more of an issue as seen with the Zalman CNPS7700 Cu below. 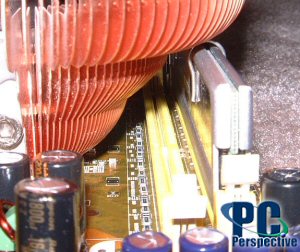 The issues metioned above are very minor considering you expect less-than-ideal design in a micro-ATX form factor due to space constraints.