NVIDIA is finally ready with their first offering for the Intel platform. They have been at work on this longer than you might think, and they are promising to be the fastest option on the Intel front. Did they do it on their first try?

It has been some time since Intel can say they have had any competitive competition in the chipset market.  I say “competitive” to say that though companies such as VIA, SiS and ALi have continued to be around, they haven’t posed any real threat to Intel’s dominance.  Intel sells the most processors, and they sell the most core logic chipsets for those processors.  That makes a lot of people at Intel very happy.

But then the official word came from NVIDIA this winter that they had completed a licensing agreement to work on an Intel chipset.  Nearly no details were given at the time about the business or the technical side of this convergence, and even to this day, we know very little of what dealings went on between the suits at either company.  The technicalities, however, are being revealed today.

NVIDIA is laying claim of attempting to make the very best enthusiast chipset for the Intel platform.  Can they succeed?  And if they do, will it matter? 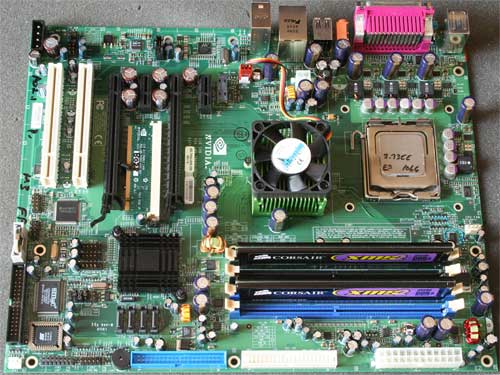 There are definitely some “highs” and some “lows” on this list, but let’s touch more on those in the following pages.