NVIDIA set out to make the fastest Pentium 4 platform and they succeeded — period.  NVIDIA engineers obviously spent a lot of time prior to the official announcement on November 19th of a cooperative agreement betwen Intel and NVIDIA working on the memory controller and platform enhancements found in the C19 north bridge.  Many people and media thought that since NVIDIA had gone a couple of chipset generations without working on a core logic memory controller, that they may have lost the edge they once had from the nForce2 days, but that is obviously not the case.

The performance on the NVIDIA nForce4 SLI Intel Edition chipset is an improvement over the Intel flagship chipset, though not by much.  But its an accomplishment no other chipset vendor has laid claim to in a long while.

As you would expect from something labeled “nForce4” this chipset sports a wide array and nearly complete feature set.  PCI Express, SATA I and II, various RAID array options, SLI support, Gigabit networking and a hardware firewall name off the major accomplishements of this MCP generation.  The one area that we have already mentioned NVIDIA has slipped in is that of audio — simply having AC’97 support isn’t enough to compete with Intel’s HD audio Azalia codec and maybe not even enough to compete with VIA’s upcoming 8251 south bridge audio solutions.

Even with that in mind, you’d be hard pressed to find a better feature selection on a motherboard anywhere. 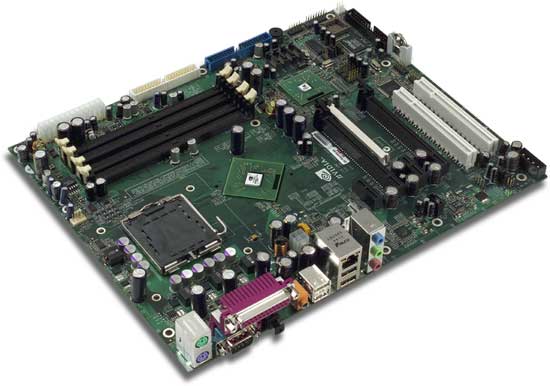 This is very much still in the air for this product, but NVIDIA has told us that we should expect to see prices at nearly the same levels as we see current AMD nForce4 SLI motherboards.  Of course, if I were to feign a guess, I’d bet on them being closer to $10-20 more expensive due to Intel licensing or to make up the extra development time in this chipset.  I can’t say for sure of course, as I am not privy to the business side of anything that goes on.  We’ll have to wait and see when retail boards start hitting the channels to see what the initial take on them is.  I know that if the prices are as high as the first SLI boards were for the AMD chipset, then there will be little NVIDIA can do to sell these parts.

NVIDIA is targeting a very small segment of the market with this chipset.  They have told us, and Intel, that they are going after the enthusiast market with the nForce4 SLI Intel Edition chipset.  That no doubt means that this is going to be a very low volume part for them for the forseable future.

My first thought on the NF4-Intel was that the current status of AMD as the gamer’s choice of CPUs would absolutely cripple the chances of this chipset succeeding at all in not only its primary market, but its ONLY market.  There is really nothing NVIDIA can do to give Intel the push it needs to increase it’s gaming performance, and I don’t think they would even if they could.  But what this chipset can do is offer the ultimate in gaming in the form of SLI, for those users that also want the features that Intel has and AMD doesn’t, such as smoother multitasking and media encoding with HyperThreading technology.  But with dual cores from both vendors nearly here, that may mean less and less as the weeks go on.

I know this question should be on everyone’s mind since recent reviews have shown the Intel dual core parts to be very close.  The short answer to whether any given nForce4 SLI Intel Edition motherboard will support dual core processors is: maybe.  NVIDIA is claiming it will be a vendor specific implementation issue that is not dependent on NVIDIA at all.  It seems that only a few of the major motherboard manufacturers are privy to the information required on how to make their NF4-Intel chipset based motherboard DC ready; Asus, MSI and Gigabyte are, but the tier 2 vendors may not.  You’ll be better off waiting for individual board reviews to test for dual core processor compatibility before buying a motherboard, if suppport for DC is a factor for you.

Along with the usual PR releases that come with a new chipset, NVIDIA gave us notice on one about a new “memory certification” program.  This program is an attempt to “assist consumers in finding and purchasing the fastest DDR2 memory modules specifically tuned and tested for use with NVIDIA nForce4 SLI Intel Edition-based PCs or motherboards.”  When a memory manufacturer’s modules have passed this test at NVIDIA, then that company can market that module as “recommended” for use on the NVIDIA NF4-Intel chipset.

This all sounds very familiar to the “SLI Certification” program introduced not too long ago.

While the idea of having companies work together to make sure users are getting parts that are compatible with each other sounds very good on the surface, I can’t quite push out the negative feelings I get about this process.  Basically, in order to guarantee that their chipset is the fastest on the block, NVIDIA needs incredibly fast memory.  Above and beyond the JEDEC standards for timings.  Did I mention at higher voltages too?  In order for the users’ to get this same experience, they are going to have to buy non-standard, high end memory and in order for it to be guaranteed to work, you should look for that “recommended” logo on the box.  Does anyone else get the feeling that maybe if Intel had decided to push a “faster than standard” memory scheme onto memory vendors to be “recommended” they might be just as fast as NVIDIA?

But hey, at least this time, there aren’t any drivers to disable users from at least TRYING other brands of memory right?  That just remains on the SLI program.

NVIDIA has definitely breathed new life into the gaming world on Intel’s Pentium 4 processor.  The SLI technology is going to be the main draw to this new chipset and high end enthusiasts that are sticking with Intel are definitely going to be leaning towards this option for their next motherboard as it is the best choice for features and performance.

Our forums are a great place to find more information, user feedback and helpful assistance for any motherboards, processors or anything else. Take a look, I’m sure you’ll find something to interest you.

Be sure to use our price checking engine to find the best prices on the Intel 3.73XE, and anything else you may want to buy!