The NVIDIA MCP04 Ultra south bridge offers almost the same feature set that we saw introduced with the nForce3 platform on the Athlon 64 release. 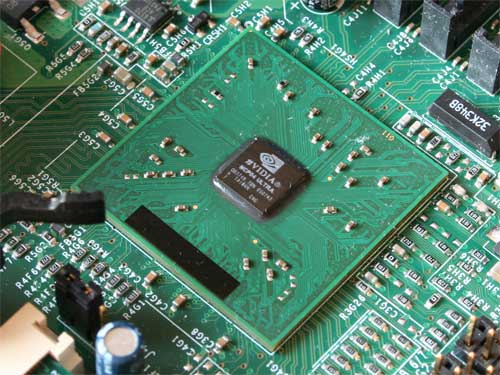 This new chip for the NVIDIA nForce4 SLI Intel Edition chipset sports only 21 million transistors on a 0.15 micron process.  It remains possible enough to passively cooling this chip. 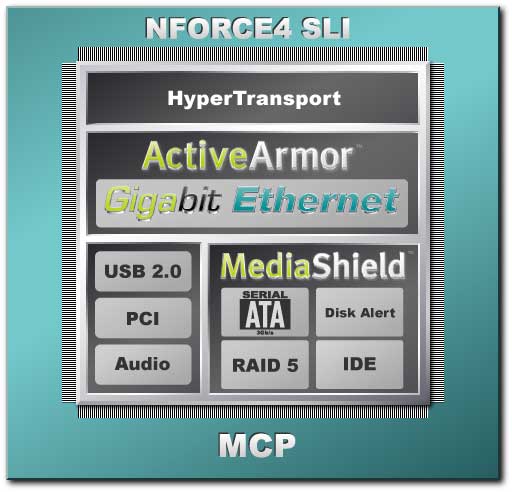 As you can see from this diagram, NVIDIA has just about everything in their feature set including enhanced networking and security, SATA II 3 Gb/s support, RAID and more.  I’ll briefly go over these features again, courtesy of my past look at the nForce4 chipset on the AMD platform:

First up is the networking functionality of the nForce4 chipset.  This is an area that NVIDIA has been concerned with since the release of their nForce3 chispet for the Athlon 64 line of processors.  First, there was the addition of a highly integrated and enhanced Gigabit network device that was included on the chipset.  At the time, before PCI Express was around, NVIDIA’s implementation of this NIC enabled a much higher bandwidth alotment than standard PCI Gigabit solutions.  Along with that, NVIDIA tagged some integrated firewall software that was coupled with their Forceware driver solution.  It included minor hardware enhancements that improved performance and lowered CPU utilization over most retail firewalls.  With the nForce4, NVIDIA added to both of these features and then some.

With the nForce4 launch, NVIDIA has several improvements on their SATA and RAID implementations.  First, the NVRAID software, though it includes the past look and feel, adds a lot to the functionality.  Now you can launch easy-to-use management wizards to help you rebuild an array, set up a new one or destory a current one.  You can also view the current active disk status on screen.

This new RAID software includes support for dedicated spare disks.  These are hard drives, that under normal daily use, will sit idle and not be active.  It at first sounds like a waste of money, until you learn that if a current RAID drive dies while in active duty, the reserve drive will automatically take its place and begin the mirroring job or what ever function the array is in.

NVIDIA is also the only chipset manufacturer with SATA on-board that has expanded the SATA channels to four but still giving each two channels their own transfer paths.  This means that channels 0 and 1 share a data path that is seperate from the path that channels 2 and 3 use.  When utilizing 3 or 4 disks, this can mean additional bandwidth benefits to your storage solutions, though the 2x bandwidth number that NVIDIA is claiming in the slide above is a theortical max.

NVIDIA nTune software has the obtuse goal to “maximize gaming performance” and to “run silent for DVD playback.”  What this means to the PC enthusiast is overclocking and underclocking.  NVIDIA has also included some great monitoring funcitons as well as basic benchmarking and ID information that can be very useful for troubleshooting.

One of the main new features is the nTune’s “search” feature that automatically attempts to overclock and tune your components to the maximum speed possible.  This is done by adjusting and changing your settings, including the processor voltage, clock, multiplier, NVIDIA GPU, memory timings and speed, and more.  The software is able to test thousands of possible settings to find the one that it deems the best performing, stable solution to overclocking.  Now, even NVIDIA admits that experienced overclockers will probably be able to achieve better overclocking by hand, but what this app provides them is a good starting point.  While it might take you the better part of a couple days to tweak your system completely, nTune can run in the span of a couple hours or less, providing you with a great beginning point to start pushing upward, cutting a lot of your trial-and-error time out of the job.

The other new features that this software introduces are GPU overclocking, support links to websites, logging, tuning recommendations, and a BIOS flash utility.  Of all of these, the integrated GPU overclocking is the most exciting.  You won’t have to edit your registry to adjust your core and memory clocks on the GeForce FX and higher graphics cards — you can do it right in with the other overclock settings.  And with that you get the advantage of being able to include GPU overclocks into your many gaming and application specific nTune profiles.

So what is missing from all this?  How about a decent sound system?  It looks like the rumors of the Azalia based HD audio system were incorrect, as NVIDIA chose to use an AC’97 standard instead.  Perhaps in the next iteration…