AMD is getting set to push their first dual core Athlon 64 X2 processors out to the world next month. How do they stand up to the Intel CPUs released last month? Are they going to be worth the extra cash they are asking for?

With the release of their Opteron dual core processors back in April, and their corresponding announcement of the upcoming Athlon 64 X2 line of processors, AMD threw its hat officially into the dual core processor arena.  And truth be told, AMD was much more prepared for the fight.  Having been in the plans of the Athlon 64 since early on, adding a second core to the Athlon 64 turns out to be a much simpler and more elegant solution than what Intel has presented us thus far.

But I am getting ahead of myself, let’s do a rewind and look at the new Athlon 64 X2 processor.

The Athlon 64 X2 processor (or Athlon X2) is in most ways very similar to the currently available Athlon 64 processors.  It still uses the 939-pin processor package and still has an integrated memory controller with DDR400 memory support.  The processor still uses the high speed HyperTransport interconnect to communicate to the outside world.

The above image actually shows the Opteron processor, but with a couple of minor differences (only a single HyperTransport link), it is the same as the current Athlon 64 lineup.  Here you can see all of the features that have made the AMD64 class of processors a big success: integrated memory controller, HT links and the AMD64 core.  One feature that seems to have gone unnoticed, but turns out to be even more important to the dual core age, is the processor crossbar.  It is this feature that allows AMD’s engineers to quickly and efficiently turn the single core Athlon 64 above, into the dual core Athlon 64 X2 seen below:

You can see now that we have two complete CPU cores connected to the same request queue, crossbar and memory controller.  The original crossbar design on the AMD64 core technology did in fact have two “connections” for processor cores, but the second was simply left empty up until now.  AMD could then take their latest CPU core revision, currently at Rev E, and combine two on one die for a very elegant dual core processor solution.

AMD’s X2 solution stands out past the Intel Smithfield design in that it allows the two processors cores to work in a fashion that prevents the bottlenecks seen on the Intel 8xx series from occurring.  The processors are able to communicate directly via the system request bus, which is very high speed, for data transfers and cache coherency tests.  The Intel Smithfield processors communicate over the 800 MHz FSB, and during these communications any information going to or from the north bridge and memory on the FSB must be stalled.

The Athlon X2 processors are based on the Rev E stepping of the Athlon 64 core and include the SSE3 instructions as well as mixed memory support and support for a full four DIMM slot configuration.  There were some other changes that were made as well that allow the new 90nm X2 processor to run at a significantly lower power/performance ratio than previous Athlon 64 processors.  In our conclusions page, you’ll see that our X2 4400+ doesn’t use much more power than our 4000+ processor, which is running at 200 MHz faster frequency. 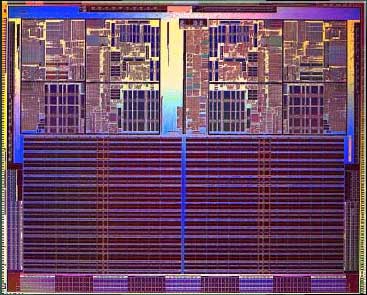 Here is the beast that is the X2 processor, sporting 1 MB of L2 cache.  It has about 229 million transistors in a die size of 199 mm^2.  You can see that most of that space is actually taken up by the L2 cache.  The Intel 840 processor has a similar die size and transistor count, also on a 90nm process.