No one disputes that the Intel Pentium 4 lines uses a LOT of power, but does the Asus boar draw more of it than it needs to?

According to our numbers, the answer is no.  It has the same power requirements as the reference NF4 board and the 925XE platform too.  Of course, this isn’t say a whole lot…

When the nForce4 SLI Intel Edition chipset was first launched, we were very curious to see if NVIDIA would be able to squeeze support for dual core processors out of the first revision made available to manufacturers.  According to NVIDIA, and now to Asus and their P5ND2-SLI motherboard, the answer is yes.  Though not as easily as we might have hoped.

According to Asus, a lot of work was required of them in the BIOS to support dual core Intel Pentium processors correctly.  This required us to look at several different BIOS revisions from Asus before we were finally able to approve of the performance and stability of using our Intle XE 840 processor in this motherboard.  Our first tests with the processor with the initial BIOS version were not very positive — performance was low and stability was up in the air.  With Asus’ latest BIOS they got to us last week, all seems to have been fixed, with our performance numbers right in line with what we saw in our review of the processor recently. 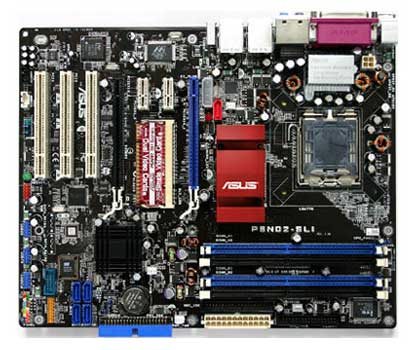 What makes this all so interesting is that it looks like it may leave a window open for motherboard manufacturers to set themselves apart from competing NF4 Intel Edition motherboards.  Both with just having support for the dual core processors, and also for having the fastest performance with the dual core processors.  Or maybe we are seeing a limitation in the first wave of NVIDIA chipsets that weren’t designed with dual core in mind exactly?  Time, and more retail board reviews, will tell.

Of course, we are talking about an SLI supported motherboard, right, so let’s discuss that.  The NVIDIA nForce4 SLI Intel Edition chipset is the only NVIDIA chipset on the market for Intel’s platform, so you can be safe in assuming that all motherboard released on this chipset are going to support SLI.

As we have seen a couple of times before, the Asus P5ND2-SLI motherboard is the first one out of the gate with a new chipset and it still manages to improve on the motherboards performance over the reference platform.  The latest BIOS we received allowed up to keep the memory timings at or below the recommended settings from NVIDIA and Corsair to take full advantage of the low latency memory technologies in NVIDIA C19 chipset.  I honestly didn’t think we’d be running DDR2-667 at such low timings this early, and maybe that is why AMD feels left out of the loop and is moving to DDR2 as well?

Though I have my reservations about its long term place as a motherboard feature, the PEG BIOS option on the Asus board did enough to increase our gaming scores slightly and give the win to the Asus board in all of our results.  As I mentioned in the BIOS pages, I did come across a stability issue using that feature, but with a reference ATI card, not a retail one.  As time goes and I plug more video cards into this motherboard, I’ll let you all know if any more compatibility issues come up.

The P5ND2-SLI delivers on this point very well, giving users a lot of storage options, network options, overclocking options and more.  With six total SATA channels and two IDE channels, you should have more than enough room for all the hard drives and optical drives you should have in a desktop system.  With the NVIDIA supplied SATA-II controller, you are also ready for the next wave of disk drives that will support 3.0 Gb/s bandwidth instead of 1.5 Gb/s.

Two Gigabit LAN connections may seem like overkill to many of you, and I probably agree.  But it is better to have the features there and not use them than to not have them at all right?  Well, some might disagree and ask for a lower cost motherboard, and Asus has that in their non-Deluxe versions.  Though on-board audio is included, I doubt that many of our readers will want to use it, instead going with an external audio solution from Creative or Turtle Beach or some other option.

SLI support is another big plus, and though we are soon going to see ATI’s version of this, NVIDIA fans and users who want the best now are definitely going to be pleased to find this option here.

Finally, the BIOS is a real treat and allowed for me to more than adequately tweak the system for best performance AND overclock the processors I had on hand.

While this board isn’t widely available yet, the one place I did find it for sale showed it at nearly $300!!  The same class of board based on the 955X chipset from Asus is priced at about $250.  If NVIDIA is serious about wanting to take some market share from Intel’s high end chipsets, they are really going to have to bring the prices down a bit somehow in conjunction with the motherboard vendors.  I don’t know what NVIDIA charges Asus to use their chipset, name and the SLI logo, but if Asus is putting the same percentage of profit on all their boards, then NVIDIA needs to bring down costs pretty soon.

I didn’t come across any dramatic issues with the Asus P5ND2-SLI Deluxe motherboard.  The chipset heatsink got a bit too hot for my liking, though it didn’t seem to slow down performance or overclocking at all.  The cost is more than a bit high, but hopefully other vendors selling the board will force the prices down a bit in the coming weeks.  Overall, a solid product.

If it was the goal of Asus to bring out the first Intel-based SLI motherboard to the market, they succeeded.  And if they also intended to make it the fastest Intel motherboard available for purchase they accomplished that as well.  The P5ND2-SLI Deluxe is a great combination of features, performance, stability and has great overclocking features to add to the mix.  It won’t come cheap, most of the top tier products never do.

Our forums are a great place to find more information, user feedback and helpful assistance for any motherboards, but especially the Asus boards in our Asus motherboard forum.

Be sure to use our price checking engine to find the best prices on the Asus P5ND2-SLI Deluxe, and anything else you may want to buy!

Be sure to use our price checking engine to find the best prices on the Intel 3.73 GHz EE Processor, and anything else you may want to buy! 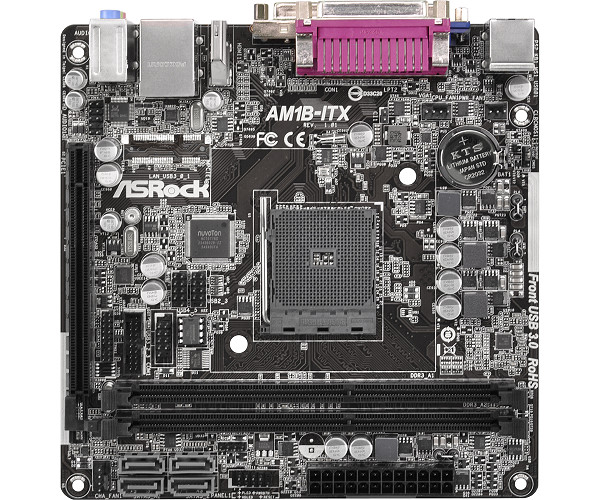 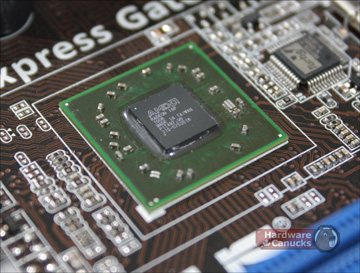