ATI has just announced their CrossFire multi-GPU technology. Can it stand up to the tidal wave of SLI support? While today is just a technology announcement, we’ll have to wait until late June to see some parts.

While we are still several weeks from getting actual hardware to play with, ATI is today announcing their multiple GPU technology, now officially called ATI CrossFire.  Since we don’t have any hardware to test for ourselves, what we have below is just a presentation of the information I have been shown and our analysis on it.

In similar fashion to what NVIDIA’s SLI technology has been doing since it’s initial announcement, ATI’s CrossFire technology allows users to utilize two graphics card to render a single image for improved performance.

The quick equation many of you will be looking to see is:

= CrossFire.  You will need a new motherboard based on a new ATI chipset, codenamed RS and RD480 (for their Intel and AMD versions).  You’ll also need a special CrossFire edition ATI graphics card that has the additional logic on it to handle the multi-GPU technology.  Finally, you’ll need your existing (or another) X800 or X850 series of card. 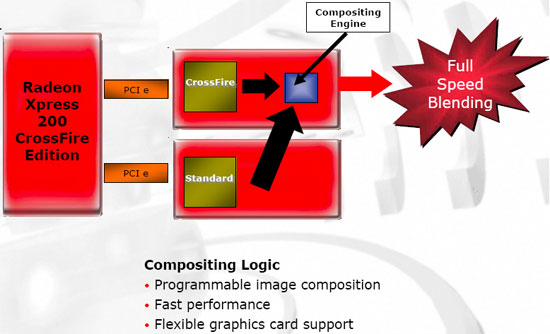 The compositing logic on the ATI CrossFire edition cards is what gives the ATI CrossFire technology the ability to render an image on two different video cards and then to combine them back together.  The engine is on an additional chip on the PCB of the video card and is required for CrossFire to function. 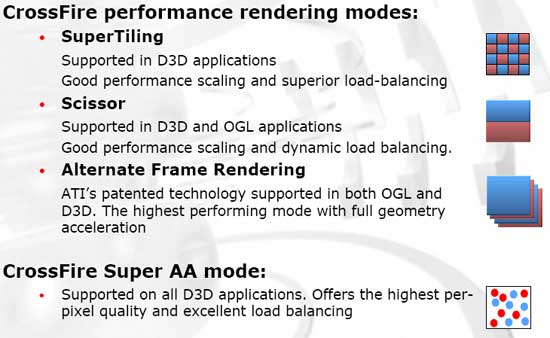 ATI’s CrossFire technology has the ability to use the same two render methods that the NVIDIA SLI technology does with its “scissor” and alternate frame rendering.  Scissor rendering is really just a split frame rendering, but as far as we could get information, this is a simple 50/50 cut, and it does not have the ability to modify how much each card is rendering dynamicly as the NVIDIA SLI cards do.  Supertiling, however, is a unique option to the ATI CrossFire technology. 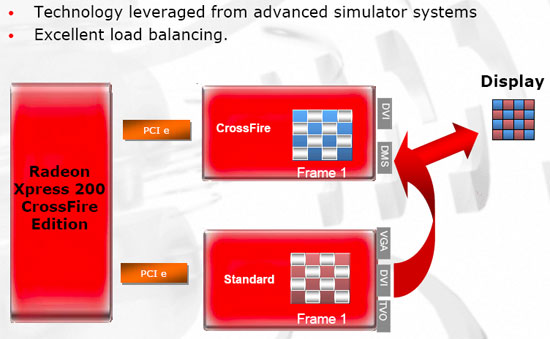 With Supertiling, the screen is split up into squares and the two cards alternate rendering the internals of those squares.  The break up is going to be very deep, with the squares only 10s of pixels in width each.  This sets up the ATI CrossFire with a good way of load balancing, as any object that is very heavy in rendering power in the game will be broken up between the two cards mostly evenly. 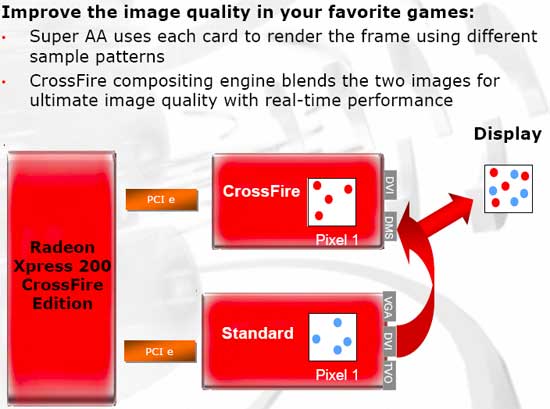 ATI is also bringing with CrossFire a new way of doing AA that utilizes both cards to increasing the projected sampling rate.  By combining the different sampling patterns ATI is able to give us antialiasing up to 14x apparently.

While performance is still up in the air, ATI of course did give some basic performance number in their presentation.  They were critical of NVIDIA’s lack to support performance improvements in ALL games available.  I am not going to present the performance numbers from either side in the debate, as we should all know they are going to skewed towards the side doing the presenting.  Instead I will await for my test bed to arrive in June and by then I am sure we’ll have a better grasp on the performance of CrossFire vs SLI. 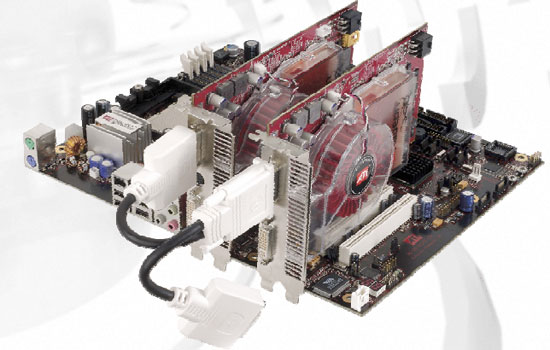 Here is the typical setup ATI has envisioned for their CrossFire technology.  Instead of connecting through an internal bus like the SLI technology does, CrossFire uses a proprietary external dongle to handle combining the rendered images.  I don’t have a lot of data on this technology yet, so we’ll have to wait until we have the product in our hands to see if the external cable is going to effect how we view CrossFire at all.

With this announcement on CrossFire from ATI comes with it two additional chipsets from ATI to support their multi-GPUs. 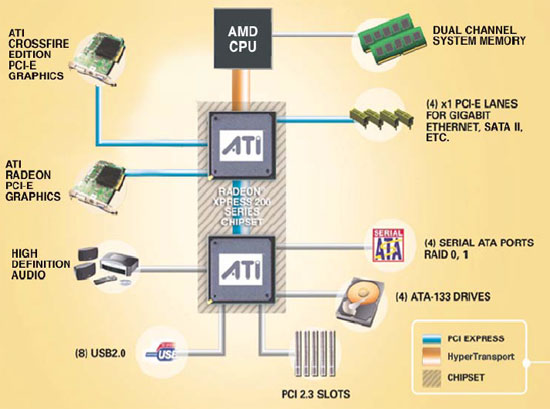 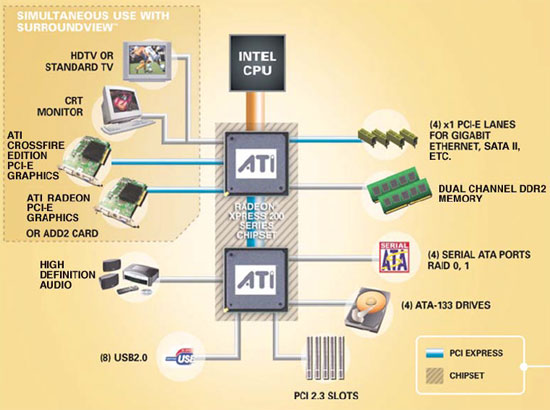 As you can see there isn’t a whole lot new on either chipset with the exception of HD audio support on the south bridge as well as integrated graphics on the north bridge of the Intel chipset.  ATI claims their AMD part is aimed only at enthusiasts so the IGP was left off its spec list.

Finally, we get to pricing and compatibility. 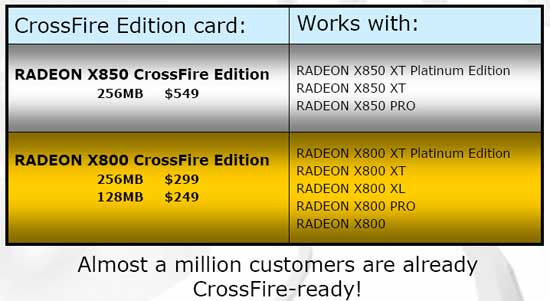 Having two models to support the two different series of GPUs from ATI is a requirement in order to even have a chance of being able to load balance the setups, according to ATI.  While you may have heard rumors that any ATI X8xx series card will be able to work with any CrossFire card, this just isn’t true.  Due to the performance differences between the X850 and X800 lines of cards (different pipelines, clocks, etc) it wasn’t possible to extend the compatibility that far.

There is one draw back to this though: the CrossFire technology has to use the lowest common denominator of pipelines for the cards installed.  This means that if you have an X800 Pro card that has 12 pipes enabled and then you purchase the X800 CrossFire card that has 16 pipes on it be default, the CrossFire card will be forced to “down-pipe” itself to only using 12 pipes in order to maintain a stable load balance.  Keep this in mind as you read about this technology throughout the day.

I’ll have more on this from ATI during Computex and as partners spill more information about it!  Thanks for reading, and be sure to visit our Video card forum to discuss!

Two Catalysts from AMD; 11.12 and a highly recommended preview version of 12.1