All three cards used approximately the same amount of power, with the ATI HyperMemory card using about 5 watts less during game play.

In our testing of these three video cards I came across the unusual point that the 32MB card we were supplied with easily outperformed the 64MB card in all of our tests.  At first this really confused me, and I had to do a lot of digging to get a straight answer from PNY and NVIDIA on the subject.  In short, the faster memory of the 32MB card (remember it used 350 MHz memory while the 64MB card used 275 MHz) simply brings more to the table than doubling the local frame buffer does.  I was told that in some cases, where textures are very large, the 64MB card does out perform the 32MB card, but the only instances I could find where that occurred were in games at higher resolutions where the differences were between 5 FPS and 6 FPS.  Obviously, no matter which card wins that test, you aren’t going to be able to play either of them.

So where does the advantage of having the 64MB card come into play?  I honestly couldn’t tell you, and if you want to look at a 6200 TurboCache card, then a 32MB version with the 64-bit memory bus and 350 MHz memory should be your choice.

In the other battle we saw here between ATI and NVIDIA, the results were split down the middle in our game tests.  NVIDIA’s card mopped up on the Doom 3 test while ATI’s did the same for the Half-Life 2 test.  Both performed solidly (comparatively, at least) in the Far Cry benchmark.  The NVIDIA 6200 TC did enable a better overall experience in the game though by not allowing the FPS to drop as far as the ATI HyperMemory card did. 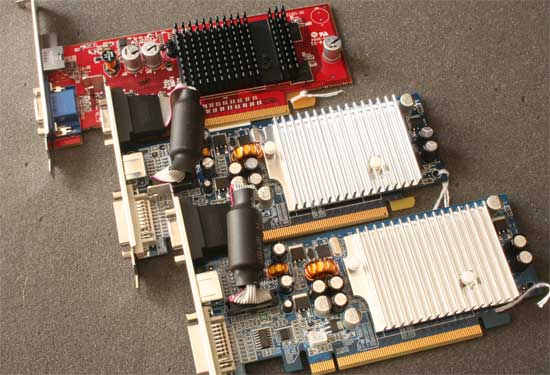 Both solutions are acceptable for the markets they are aiming for, but if I had to give a nod to one, it’d be NVIDIA’s TurboCache offering.

Confusing Enough for ya?

One thing these products definitely do is add some confusion into buying a card.  Go to a retail store and see a TurboCache card for sale and you’ll surely see “Supporting up to 128 MB of memory!!” or something similar.  In doing research for this article, I was looking at the prices of retail cards online and found that at about half the online stores, there was no indication of the specs I would need to know before buying one.  Some didn’t even list the actually memory on the local frame buffer!

But what about memory interface?  Memory clock speed?  NVIDIA has offerings that use a 32-bit memory interface and a 64-bit interface.  They also have 16MB, 32MB and 64MB versions that either support up to 128MB of 256MB of total memory.  There are also different memory speeds that as you can see greatly affect the performance of the card.  This is all information and data that now consumers MUST know before buying and that vendors, retailers and marketers have the chance to screw up.

Is it worth it?

As of this writing, I was able to find NVIDIA TurboCache products online for as little as $58.  I also found some for about $75.  The only HyperMemory card I could find was priced at $59 as well.

The problem is I could also find a GeForce 6600 card for as little as $99 and it performs MUCH better than the 6200 TC offerings.  I have seen X700 video cards going for as little as $106 too that also out perform their X300 SE HM competitors quite handily.

The problem I am trying to indicate to you here is that even with the low costs of these cards, there is no reason for an end user to not save up another $50 and get one of these other GPU options.  I’d be lying to you if I said any different.  The VERY budget conscious OEMs and system builders may find more solace in the fact that they are saving $50 times X thousands of cards, but most end users don’t have that problem.

That last section really sums up my thoughts on both the TurboCache and HyperMemory products.  Yes, they are very interesting from a technological stand point; using the PCI Express bus to add high-speed frame buffer to the GPU at a low cost is good business practices too.  But when you take into account that these same companies that offer this new technology, also have much better performing parts at not a much higher price, its difficult to see how these cards are going to benefit the YOUs and MEs of the PC community.  But by all means, if you run a PC building warehouse and are pumping out budget systems left and right, these two new offerings might be what you are looking for.

Be sure to use our price checking engine to find the best prices on the GeForce 6200 TurboCache, or any other product!

Be sure to use our price checking engine to find the best prices on the GeForce 6200 TurboCache, or any other product!