I found these roadmaps in my inbox this morning that appear to have come from a Foxconn presentation of some kind. 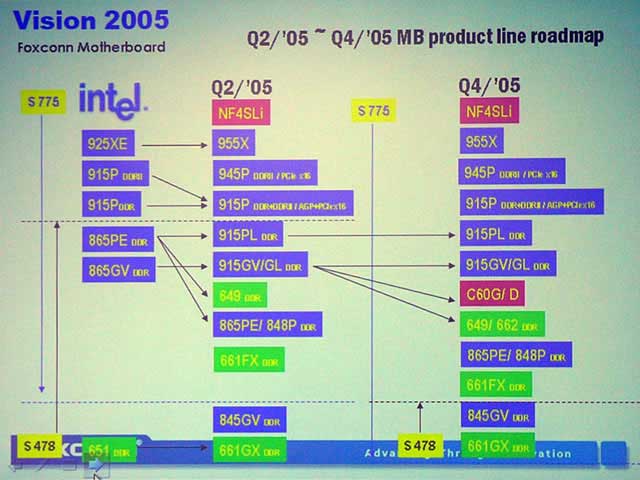 First up is the Intel roadmap; we can see that the NVIDIA chipsets are in red, the Intel chipsets in blue and the SiS chipsets are in green.  NVIDIA’s nForce4 SLI is shown here as the Q2 2005 product and if you look to Q4 of 2005, you’ll see another product called C60G and C60D.  These are very likely the upcoming integrated graphics chipset products we have heard rumors about in the past.  Other than that piece of info, there isn’t much very exciting on the Intel front from this roadmap. 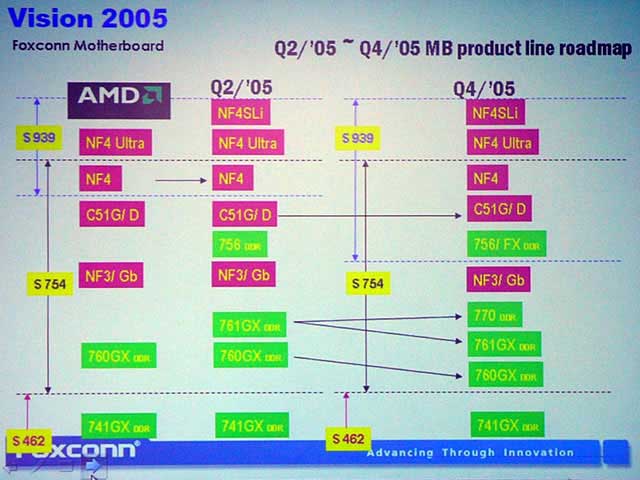 The AMD roadmap follows a similar pattern: NVIDIA is red and SiS is green.  If you look as early as Q2 of this year, you’ll notice a chipset called C51G/D that is only aimed at the S754 platform.  We obviously haven’t seen such a product, but we can assume that it is also an integrated graphics chipset.  It isn’t until we hit Q4 2005 that the C51 appears to be offered up to the S939 users.

While the GPU core that is going to placed into the chipsets is still unknown, we can hazard a guess.  It is possible we’ll be looking at a GeForce FX card core, or possibly even a GeForce 6200 core, with TurboCache support and all.  ATI is currently the only chipset company offering a decent integrated graphics solutions for either AMD’s or Intel’s market, so surely NVIDIA is feeling the heat in that area of the market.

While NVIDIA won’t officially comment, we can only assume that some more details will expose themselves during my upcoming trip to Taipei.  There is a discussion going on in our forums about whether or not you think this chipset might take off, and if you would consider a build around it.